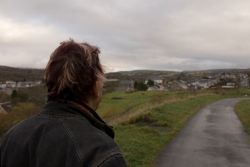 Looking goggle-eyed out of the plane window down onto the car park like sands of Venice, I felt relieved. At last, I had ticked another major ambition off my list and instantly wanted to leave so I could return. It felt good to touch down and shake the nagging doubt away under a golden azure soaked sunshine. I smiled and my smile was one that anticipated the thrill of feasting on pavilion after pavilion of worlds made for my appetite and some that would not be to my taste at all.

In preparation for my trip, I did more than my usual research on who to seek out and who to search for, but more importantly I closed my ears to those around me who condemned the Biennale and particularly Wales’ John Cale. I wanted to ignore the negativity and enjoy the spectacle at least while I was there. It is far more interesting to discuss how the Biennale has changed from originally offering wealthy Europeans an opportunity to marvel at exotic places and how nationality is now intrinsically linked to but no more an overriding factor than that say of the environment in the make-up of the countries’ choices. I wanted to look, look again and return to the beginning to look some more. Simply I wanted to make up my own mind.

We stumble on Bruce Nauman, entering a cool air conditioned pseudo-Italian palace couldn’t have been more fitting for the seminal work of the seminal artist Bruce Nauman in neon! The work was a greatest hits package but playfully distant, minimal but a consistent sometime merry rhythm resonated from each work creating a cacophony bleeding into a melodic metronome of seminal Naumans.

I love Vladimir Tatlin, I love Andriy Shevchenko and I love the Ukraine and we all love a good mystery. Biologically, we all enjoy being scared due to the pumping of endorphins caused by the injection of fear. Chcken & Mastori’s site specific work unnerves and intrigues in equal measure making for an uncomfortable but, as with all masterful suspense, enjoyable experience upon reflection. The Shining-esque dimly lit, eerie rooms with oligark lustre holding together sculptural vistas that suggest horror, accident and haunting.

For some time I have fancied Miquel Barcello’s work. Not in an unhealthy way, more a crush, an appreciation of its’ grandness and humanity. Although, the Spanish Pavilion boringly resembles a white cube gallery space in execution, it is Barcello’s brutishness and primitivism that evolves its’ pose able thumb to grip a thick brush high above the rest.

Jussi Kivi’s Fire & Rescue Museum showed a loving, personal response to the only Fire & Rescue Museum in Finland which has recently closed. A series of video clips show childhood experiences alongside curious cabinets full of one man’s obsessive collection of Fire station memorabilia from across the world. In memorial Kivi recreates an exact replica of the Museum but I couldn’t help wondering whether it was ever a real museum? Will I ever know for sure? I began to think of the Fire & Rescue Museum as an analogy of past Biennales, grouping countries together and documenting their peculiarities laid out next to one another for all to see.

Regardless of this the work burns with a wholesome personality its’ shadow looms with uncertainty. An uncertainty to whether the obsessive documenting and collecting was worth it, a question all artists know to be true.

There is something very intriguing about walking uninvited through a home, even more so when its’ narrative is full of strong homoerotic statues and ornaments to a Nordic lothario’s shag-pad. Ambient music un-settles as a seemingly domestic happiness fights to fit into an empty promiscuous life. Confronted by a door with two handles and a crack down to the floor, further drawing attention to this dilemma. Which way to go? Where do I fit in? How do I get out?

Despite the riches and purchased tranquillity a literary paralysis has set in. The final frustration at the typewriter tapping a self-portrait in writers’ block across the familiar furnishing of the dead man floating in the pool outside isolated and unaccepted.

The Nordic and Danish pavilions are companion pieces. Where the Nordic focuses on the homosexual reinvention of the domestic, Denmark diverts us towards homelessness. Again a familiar domestic scene plays out, feeling Lloyd Grossman wriggling up inside me I go through the keyhole. The normality of the house in all respects is offset with a sinister decay of the building that stands prominent due to the absence of the family who we know will never return. Part Amityville horror, part Louise Bourgeouise and part ACME. The house owns men but luckily we get out of here alive.

Liam Gillick’s script for the ‘speaking cat’ tickled me. I have since been told that the cat was anima-tronic and should have moved. This would have spoilt it for me and for once I was glad an exhibit was broken! Being read the monologue of the ‘Kitchen Cat’ whilst weaving in and out of the derivative Gillick’d wooden kitchen units was a one of my highlights. This perhaps was due to my powers of regression and I am grateful to a great storyteller too.

Before arriving in Venice I had been blazing through Ian Fleming’s James Bond series and as an avid fan of Herge’s Tin Tin (especially Explorers on the Moon & Destination Moon) Claude Leveque’s installation “Le Grand Soir” gave me the opportunity to spacewalk. ‘Le Grand Soir’ encapsulated a change in focus for the world, when we first looked out into space with belief and knew we could explore. This allowed me to indulge my inner agent stepping into what I was happy to accept as the Moonraker rocket. Thank goodness, Hugo Drax was nowhere to be seen. An immense childlike wonder came over me looking up at the safety of the silver ship, reluctant to stare too long at the ghosts of flags flapping heavily in the unnatural wind. That wonderment was exactly what Levaque wanted to recreate.

Miwa Yanagi casts a black big-top over the Japanese pavilion, her cinematic Windswept Women invoke the sheer enormity and fear of a snarling Godzilla. The oversized works pushed home the actual scale of each pavilion there is simply so much space to work with, such an opportunity, and a gift for a free and fertile imagination. Yanagi’s monochrome photographs of gigantic women all flaying sinew & pent up aggression, stable but stamping-elephant like from their mock-gilded ornately decorated frames. Yanagi’s women cast shadows on those below them, suggesting defiant strength in a brutal old age from recession, climate change (so visually evident in Venice) and ultimately death.

John Cale’s selection to represent Wales at the Venice Biennale has stirred much debate from within the Welsh art scene. This, of course, can only be a good thing. Cale’s work slowly burned in the brewery, pacing, sitting and waiting like a homage to the rain crisscrossing over hills and pouring down through valleys. I felt Cale’s shame, of losing a language, the warmth and laughter of friends and family left behind but not forgotten and the faithful hills that surround the chambers of a heart. The work spoke to me directly as if from the throat and crusty lips of my country – “You hate me but you can’t stop loving me too”.

My original reaction to John Cale’s appointment was one of surprise not only due to his lack of experience in the contemporary art scene but because we have tended to exhibit a number of artists of varying experience rather than the work of an individual. Of course it is easy to condemn Cale for his lack of experience in the visual arts but in some cases this is what made the work exciting. I found his lack of knowledge on the conventions of the history of video art refreshing and making work with less experience doesn’t mean his comment on the country is less valid, especially on such a massive stage. I still believe that the strength of the work lies in its naivety of the conventions of the medium. This is what made the work challenging and not just another video piece in a sea of others. To describe Cale as contemporary comes with great difficulty and although the work’s relationship to Wales is evident and to a specific perspective of its’ identity, it was disappointing that little was offered as way of a reflection of the vibrant contemporary arts scene in Wales. A residency like Bedwyr’s in 2005 may have helped take some of the focus from Cale and bring another much needed level to our pavilion.

Wales in comparison to the other home nation pavilions shows a distinct difference in its aspirations. Where Northern Ireland and Scotland showcase grassroots artists, we have shown celebrity that has seemingly isolated some viewers and commentators dealing so deeply with a personal take on nationality but it is this viewpoint that strengthens and distances Cale’s work from being simply ‘about Wales’.

The boundaries of nationality have never been so blurred and seemingly unimportant. Artists chosen to represent their country do nothing of the sort. Instead of beating their chests or singing anthems they relate universal experiences, viewpoints, moments or ideas. Venice, unlike the flag-waving monstrosity of the Olympic games, broadens minds regardless of their nationality, political view or religious beliefs.

Post-nationalism has helped us to understand that with global communication, business and art means we no longer need self-identify in national terms, but global ones. A world under Bourrigard’s looming shadow has no need for nationality and Venice reflects this. With Liam Gillick representing Germany, Roman Ondák, a Slovakian artist who, the dated pavilion tells us, also represents Czechoslovakia!

So how long will it be until the Biennale is organised thematically? Environmental issues in one pavilion? Political radicalism in another?