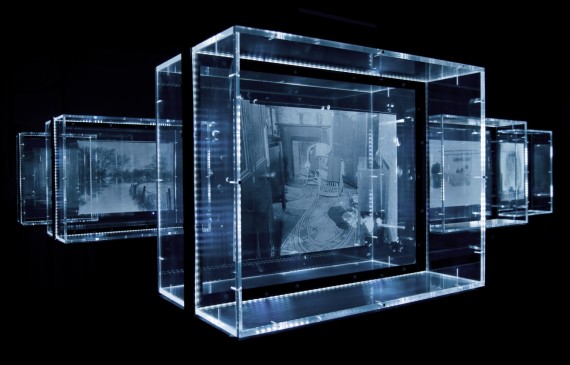 In 2014 GRAIN Photography Hub and the Library of Birmingham approached artist Mat Collishaw, creator of spectacularly crushed butterflies, corrupted, syphilitic flora, and monumental, dark zoetropes, to respond to the rich photography archive held at the Library. Collishaw’s work is often simultaneously beautiful and unnerving and In Camera, the resulting installation from his work with the archive, is no different; Collishaw has created new work that opens the shutter on a forgotten past, illuminating dark moments in Birmingham’s history.

Collishaw’s initial investigation of the archive led to a chance encounter with an intriguing image depicting a ransacked domestic interior – like a crime scene. Further research unearthed a box full of uncatalogued negatives, ghostly images of crime scenes taken by Birmingham City Police Force in the 1930s and 1940s to be used as evidence. Though the crimes and alleged crimes are known, their details scrawled on the back of each image in fine handwriting, it is not known how the collection of images came to be in the photography archive in the first place. Were they donated? Discarded and found?

Though they were originally produced as evidence documents, for In Camera Collishaw has taken these anonymous negatives and transformed them into works of art, creating a large scale installation unlike anything shown in the Library of Birmingham’s gallery space before. The gallery space is dark. Upon entering it is possible to make out the skeletal outlines of a number of vitrines standing in a loose group. All around, sudden flashes of light break out, illuminating the spectral Perspex cases one by one in a random order. Each case is accompanied by it’s own light. One by one the crime scenes are revealed – the bedroom with upturned bedding, the isolated country lane, the dangling cuts of meat, the illicit club lounge. The flash bulbs make you feel as though you’re present at the scene in the moment of image capture. Illuminating one image then the next, the effect is quite disorientating. 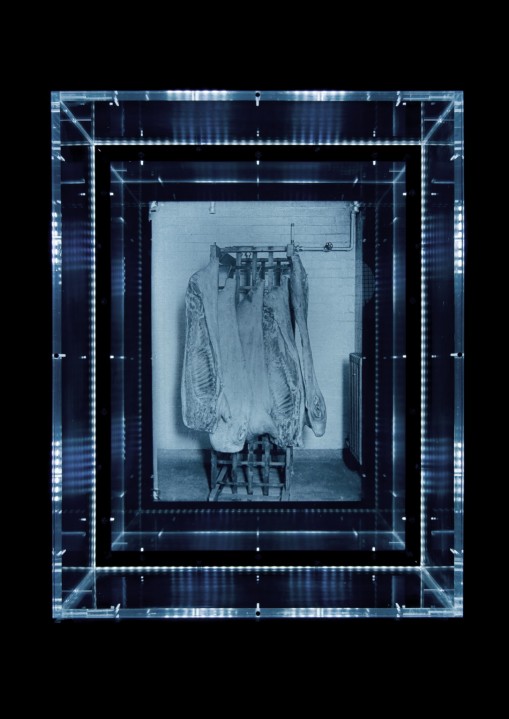 Collishaw has used phosphorescent ink to silk screen print the images onto sheets of Perspex. They sit suspended in clear vitrines and, once illuminated by the flash bulbs, fade away in a matter of seconds to little more than ghostly footprints. The vitrines are laced with tiny LEDs that provide a glowing outline. Everything is in a cold forensic blue.

As each image is illuminated we are invited to play detective. Knowing that crimes have been committed but not possessing any further information, every detail becomes a potential clue as we begin to question what we’re seeing. Taken out of their original context the images become even more mysterious and unsettling. What happened here? Who were the perpetrators? The images are totally devoid of any human presence, other than a few greasy fingerprints, picked out in the same phosphorescent ink, around the edges, which give the impression of the images being handled and pored over in a lab.

Like much of Collishaw’s work In Camera is at once beautiful and unsettling. The delicate glow of the images in the dark draw us in, leading us to wonder about what grubby acts may have been committed. As with his Catching Fairies series (1996), Collishaw has taken inspiration from historical images and breathed into them a new life.

Mat Collishaw’s In Camera runs until 10th January 2016 in The Gallery, Library of Birmingham.

GRAIN will host an Artist Talk with Mat Collishaw on 22nd October where the artist will show guests around the installation.  This will be followed by an opportunity to hear how the commission relates to previous work and Collishaw’s ongoing interests and concerns.   He will also talk in detail about his response to the archive, processes and intentions.

For more information about In Camera and to book onto the Artist Talk visit www.grainphotographyhub.co.uk