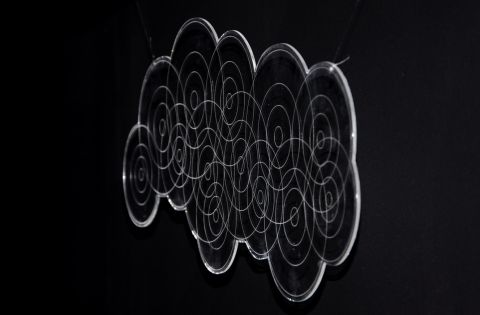 First a confession: I am not at all interested in writing about student degree shows, since I don’t know what critical value such writing has. However I was asked to give an opinion on the works at this year’s MFA at Dundee, by an exasperated crew of emerging artists seeking some attention to their works and had a great conversation with those involved, so here is a summary on a show that I thought assembled interesting ideas, particularly on spaces between storytelling, science, magic, mythology and religion, that somehow seemed a theme connecting these projects.

Dave Fyans piece, Inside Stone, an installation, sound piece, sculptural composition and ritualistic light machine is set like a magic theatre show, entered opposite the display of a crystal and Tarot Card. The composition , sound as form, is rendered as laser-cut graphics, they assemble to materialize, in a disquieting, claustrophobic half light, as a kind of spell. Here technology and the aesthetics of equipment – motors, plastic, machinery – aligned to the themes of the magical, chance or the sacred, brings to mind ideas in Marcel Mauss and Henri Hubert’s 1904 text A General Theory of Magic, that ideas from pre-modern societies about magic, are present and persistent throughout contemporary circumstances, forming part of our belief systems, as religion, philosophy and science are. Fyans’ installation also brings to mind the work of English experimental composer Cornelius Cardew, his graphical scores and ritual instructions.

Anna Orton’s work is another set, and stage, this time in an “invocation to her [demon] sisters”, and a critical examination of the work they produce collaboratively as the artists’ group Ortonandon. This vibrant space, which is high on elaborate detail, fantastical creatures, gold ornamentation and games of “consequence”, explores notions of intuition and familiar perceptions, the sharing of a common connectivity (in this case culture, gender and genetics). This sisterly hybridity, made into mythological creatures, reminiscent of the Misfit monster series of Thomas Grünfeld, dressed up here in Keith Haring-style decorations, form a kind of Cabinet de curiosités. This scenario – which belongs to a tradition of storytelling – of experimentation, imagination, satire and fantasy in surrealist abrasive collage are displayed in order to understand and explore not just their absurdity but their rationality, their logical existence.

Krissana Hatta-Atcharakun show works with an observation of the flow of experience. The work characterised by paper decoration, cut-outs and artist’s books, explores a scrutiny on Dundee’s ornamental culture and architecture, often Gothic or Victorian churches, and particularly their elaborate windows. Here these solid or transparent shapes and embellishments are replicated in paper drapes, light, shadow and reveal. Alongside this is an exploration of scientific display, particularly from the nearby D’Arcy Thomas Zoological museum, its glass cabinets. These works, which contain extraordinary patience to create, comment on the aesthetics of belief and the elsewhere of the spiritual, and of science and authority.

Kathyrn Briggs’ explores storytelling and the characteristics of the hero narrative/escapade through a collage of female characters, real, mythological and fictitious: Little Red Riding Hood, Lilith, Mono no ke, Persephone, Brigid, Amaterasu, The Little Mermaid, Venus, Courtney Gilette, Mary Benson and Dorothy Gale. This plotting through postmodern devices, encompass an array of subject matter, styles and themes, real and fictitious characters is set within the context of the graphic novel, pages and drawings, rendered in watercolour, are published here. Briggs’ staging of her characters within the graphic novel format points to what feminist and queer cultural philosopher Judith Butler’s suggests of femininity and masculinity and its expression as performative, or what psychoanalyst Joan Riviere’s describes as “womanliness as a masquerade”. This illustrated fable express just that. An illusion of a stable gender identity. The narrative and the flow of image and subtitle and captioning in a form given over to more heroic, dramatic, masculine exploits suggest an act of its “resignification”.

Samantha Jack works with terms like protest art, activist and the politically motivated, the terms and aesthetics and often the materials of social engagement and participation (banner, badges, online videos, zines, handmade lettering and the temporary space). She works here with the social consequences of an art designed for inclusion. It looks at the terminology of social justice, the currency of social breakdown, and themes about poverty, home as a site of contention and the economy of immigration, all forming the apparatus for marginalization. However within Jack’s staging mirrors what writer and architect Markus Miessen calls in his text Nightmare of Participation, a withdrawing of political responsibility and an inversion of the current consensus of the meanings of participant/participation and spectator, and even the artist as an intermediary. It reiterates participation as the grounds for conflict, the subject of artist Anthony Schrag’s practice using the performative action as subliminal and sublime catalyst.

Yumi Choi works with a categorisation of the elements, materials and surfaces of beauty. Her installation, objects and a video projection, presents a series of materials and acts on the subjectivity of beauty, its worth and the terms of its desirability. Her installation reinforces how the beautiful is staged: collections of disparate materials in exquisitely set arrangements, flawless images of isolated object specimens and pristine videos of young women applying make-up. Choi’s work, which is really about the things she collects, and has sentiment for: bottles, glass, broken ceramics, pick-up-sticks, pine cones, grains and polished pebbles, like a perfumer’s study is about the composing or authoring of the beautiful and its haphazard ephemerality.

Susanne Lund Pangrazio presents a hybrid painting and object installation that ruminates on the spaces between magic and reality. A series of interconnected paintings with a red ribbon, painted and real, reinforce a speculation on the actual and imaginary. These works reflect back on the artist’s experience with her grandfather’s schizophrenia, and bring about a tangibility of the certainty, or uncertainty, we have in the things that surround us, even though they may be imaginary. The works here are imbued with tension, the sinister, humour (she wears a Ghostbusters‘ t-shirt in one panel) and the aesthetics of horror and film noir that together speculate on the otherworldly, about fantasy as a human journey, a place of retreat and a necessary condition of the mind.

Deirdre Robertson’s show takes its inspiration from the works of pioneering town planner, scientist and philanthropist Patrick Geddes and the architectural tunnel, used a mushroom farm, that runs through the Law, a prominent feature, the dominates high into Dundee’s landscape. The project here, a scientific exploration of the meaning, and economic or environmental significance of a specific place, and its social history, is commented on, in its extensive notes, by artist Elizabeth Ogilvie, whose work attempts to question and comment on the currency, social and economics, of water. Roberton’s installation is a highly successful space that sets out to elaborate on Geddes’ purposefulness and utopias, while outlining the role the artist has in setting a stage for a reinvigoration on the environments, however unknown or hidden, that surround us.