Neither Use Nor Ornament - a-n The Artists Information Company 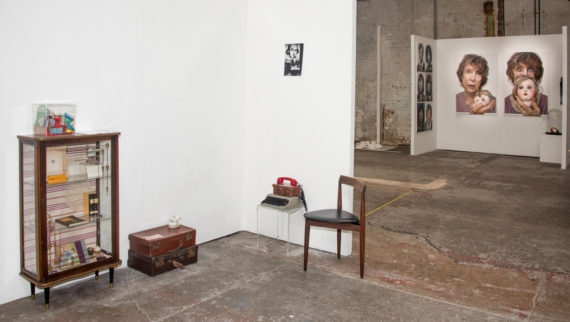 I first heard the phrase’….neither use nor ornament…’ as a small child, issued in stern terms to one of the family by my grandmother, a lady born into the Victorian era.  It offered no redemption. It is definitive, the object of its ire condemned to limbo on the periphery of things, outside, looking in, looked at, outsider, perpetually temporary. But still a symbiotic connection persists of outside-inside.

Words and phrases are often like that as we engage in  sometimes desperate encounters with disabling descriptions of our selves, given  by others. We seek instead terms that  can be enlightening,  counter-terms that free us to be, free of the coercive tyrrany of language and others.  On the surface, our increasingly polarised, bipolarised times, either-or, rigidly dualistic, uncompromising, provides a telling backdrop for this show of work from autistic artists from the WEBworks Group and nonautistic artists from ‘The Museum for Object Research’ https://www.museumforobjectresearch.com/webworks/

This statement from NHS inform website begins to lay out the territory.;

‘Autism spectrum disorder (ASD) is a condition that affects social interaction, communication, interests and behaviour.’- a comprehensively over-arching list of what any life might contain! All of our lives will have these at its core. And we will all encounter difficulties along the way as ‘Diagnosis’ is used to explain the ‘problem’ and  Problems explain the person.

The notion of ‘Neurodiversity’ that arises from a  recognition that difference is diversity questions the hierarchical implications of pathological descriptions, with the further implication that implicit suppression of neurodiversity through beaurocratic processes, such as the Arts Council Funding applications system, is a general issue. The neurodiverse is increasingly recognised in industry as  bringing new insights and creativity into problem solving in such areas  such as computer programming and game design but it is important that diversity is not simply commodified, and that the implications for lived lives are recognised. The ways in which contemporary management in general promulgates  notions of society and the individual are all in the mix. Inclusivity and diversity are not simply  problems to be managed by the commodification of individual dispositions for commercial purposes.  In this spirit, the artists taking part  here have worked in a supportive manner,  dealing with individual problems as a collective responsibility, operating as a model of the ways in which inclusivity and diversity can serve group and individual;

the implications for the way in which social policy, social interaction, rewards and punishments, the negotiation of relationships unfold are revolutionary. From the initially proposed show of two groups, of neurodiverse and neurotypical artists, the show today evolved into a unified event centred around the concept of a neurodiversity which has no centre, a  diverse group of people, not ‘about’ neurodiversity but work informing and  informed by a sense of ‘being here and being there’, of all being simultanousely self and other, a  notion counter to the norm, a hiatus, an oscillation  in the notion of self of which socially dominant forms of neurotypical power have no direct experience.

Katherine May’s ‘Three conversations’ is a tryptich of conversations with Sonia Boue. Absorbing and revealing, they develop one to the next, from informal negotiations around the business of communication to a conversation about discovery and delight in a set of tablemats, tablemats which then accompany the telephone  and headset in the gallery.  A candid and revealing conversation in The British Library, around a public notion of autism, the matter of negotiating a path through the often confused and insensitive nature of stereotypical notions of autism and the autistic,  links back into the works that surround it in the show.

Sonia Boue and Sonia Zelic remember their fathers, exiled victims of war who found their way to England and Wales respectively. Sonia’s installation,’Conversation’  reaches back and forth, her voice connecting and reconnecting her with her father via a telephone that speaks  to us. Objects sit in a cabinet as objects do, waiting, whispering, ‘..look here…..’ Sonia reads her ‘Playa y Toro’. Through the telephone we hear of the loss of a toreador’s ability to engage with a life that he loves resulting from a goring, offering visceral meaning to Lora’s (Sonia’sFather’s) political exile from Spain, the failure of his work to find critical acclaim, and the consequent price paid for events beyond his control in the personal currency  of mental illness. Antonio the Toreador laments his loss. As his identification with the Corrida is a total, bodily thing, so the playwright feels his words onto the page. Sonia Zelic offers a video portrait of her father, a flickering compilation of cuttings from a lifetime’s video recordings of Apollo space missions, western films, family holiday film, ….. and his voice from her interview with him, its text cut into the imagery.  Born in the now defunct state of Yugoslavia, and conscripted to work in Germany, he was sent to the UK to work after the war. So easily the familiar slips away, that with which we live every day and know – these are all of our fathers. We come to realise that we know so little, to see that we never knew, that our loss was born into our (un)knowing. The words of Rhiannon LLoyd Williams, Poet in Residence,   from her poem ‘Overlapping’ ask,

Spent all your days failing to

When you’re so close you could kiss them

Connecting, touching, touching the past, touching what was through what remains, reconnecting, with what remains, – Glass dishes, suitcases, the sound of a voice. A mental caressing of things? No? Yes? To work with objects is to touch, carry, lift, place, arrange, change, to feel, to think embrace. To care? To love? A yearning?

Caressing is a physical thing.

Thinking is a physical thing.

The mental is a physical thing.

Feeling is a physical thing.

Is thinking a physical thing?

Mind and body, mind-body split; a twisted strand of a question;  autistic minds in autistic bodies? ‘normal’ minds in ‘normal’ bodies?  What are we? Can we choose? Tentative answers on a telephone please 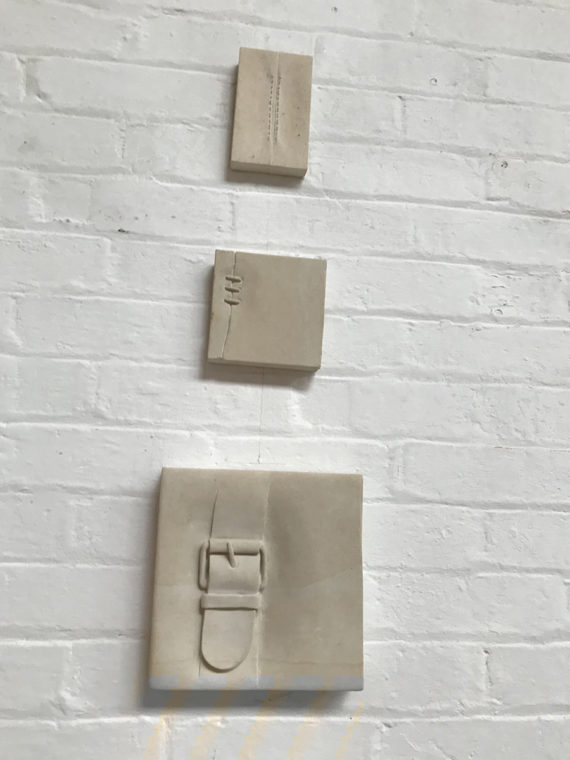 ….Bags, body bags, Ruth Geldard’s carved stone details the look of  a belt, stitching , lacing ,stapling through surface smooth and smoother than skin. ‘To Keep’ is a series of four in a reversal of ‘To Skin’, a leather bag deconstructed, stitchless and flat like a hunted trophy-hide. I remember my mother’s bag, heavy with things, a burden of contents that  had all to be spilled in each anxious search for something that might be there. Ruth’s drawn bags are portraits, bag-ladies, bag-persons, marked, softened, toughened, decorated by experience. 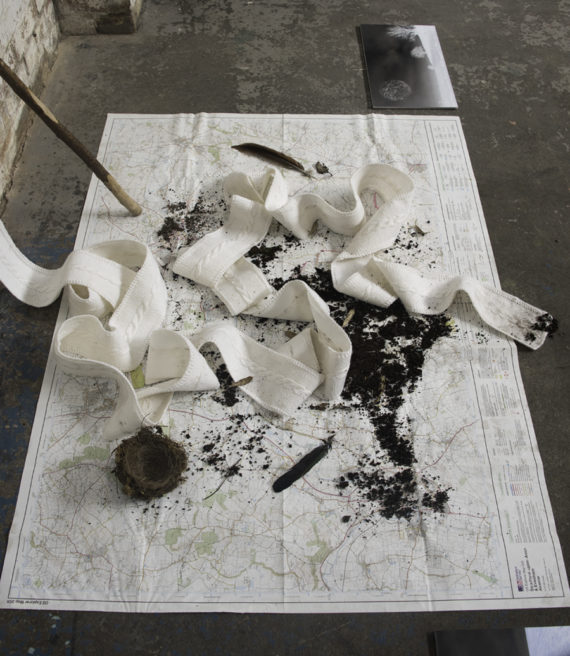 Kruse’s piece, was born of failure. Failure to realise her initial intentions, and a realisation that in the failure was the work. Writ large or small, failure is what we do. Failure is not how we must feel, but we do, and success always a matter of revisiting. How many failures did it take to create the work in this show? Art is a thing of risk, and acutely so, a denial of a common simple  perception that it is an activity simply of pleasure. Her piece, a map of walks, a bird’s nest, a walking stick, feathers and soil, photographs, and a knitted ‘object of no use’, evidence of engagement, is a victory hard won. 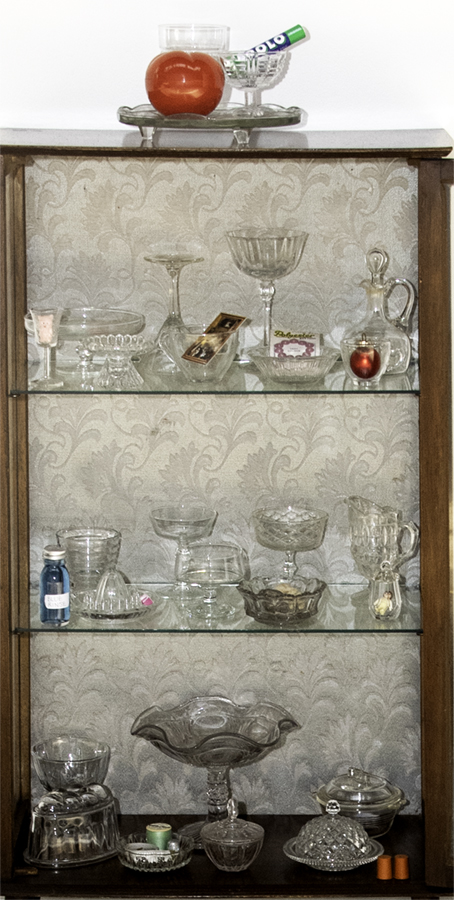 Kate Murdoch’s collection of her Nana’s glassware spreads to the floor from a glass display cabinet. Glassware? This is not a shop. Lemon Juicer, vase, fruit bowl, jug, wine glass – ‘doing’- names. Nana used these. Kate invites the visitor to add some colour, some thoughts.  Leave something when you leave?

Sonia’s exiled  father’s typewriter, his hands, still, there. On top a little suitcase. I had one of those. I packed it and left home at the age of four.  Hugh Pryor’s bottles.  ‘Lung  tonic’. Who knows the dramas joys and disappointments that it witnessed, emptied little by little into a spoon? Bottles half full or half empty or all points in between colourfully drift, twinkle and tinkle in their water tank. 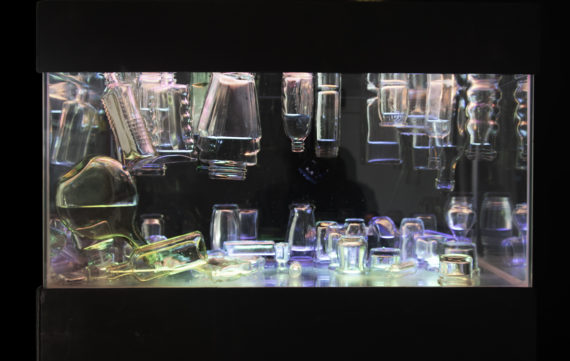 ‘I have never seen a man so scared…..’  flashes up stark in the course Sonia Zelic’s interview with her father. 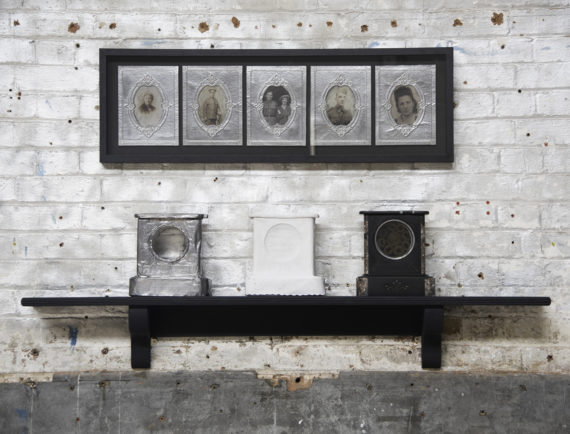 Dawn Coles’ empty clock no longer empty, filled with her hair, hair-time where once time’s machine ticked out hands-full of minutes to people passing. The void of an empty lead clock bears the weight of its material, whilst beside it, hand embroidered handkerchiefs make a lighter work. 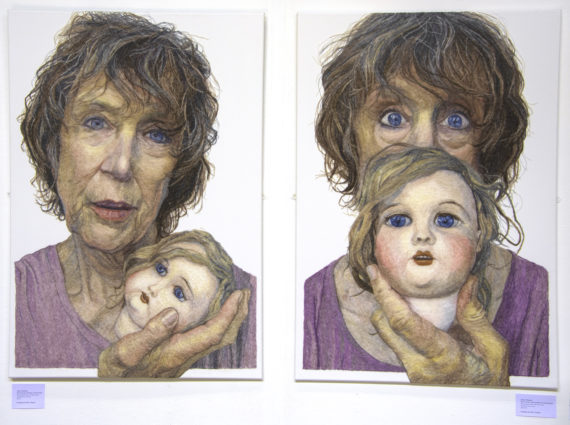 Elsewhere, a doll’s head under a Glass Cloche Dome sits below Jenni Dutton’s  ‘Absurd Sewn Selfies.’ Trompe loeil hands hold a Doll’s head.  Quizzical, mournful expressions on the faces of the stitched portraits seem to ask Why?, How come?, What for?

Neil Armstrong and David Edwards ‘Caroline Street: The absence of something…revisited.’ An installation of associations, sentiments, nostalgia, a being in the past in a present  of photographs. A place where something was, things happened. ‘Time  and Tide’, a floor level square piece, looks up at us. A composition of pavement, tarmac, and drain makes a dystopian, ironic Mondrian of a comment on the Modernist vision in one corner of the work. A single lost ballet shoe gives no clue to the manner of its arrival.  Above, a bare red light harks back to atmospheric parties held in Armstrong and Edwards’ long gone student flat. 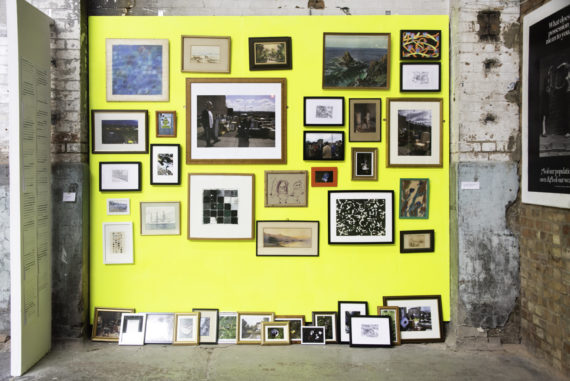 At the foot of the yellow ‘Pop upHomage to the 2018 Royal academy Summer show’,  in this case a rather more wilfully laboured, subdued arrangement of of images and tastes than Grayson Perry’s exhuberant  display, is a reproduction of Jan steen’s 1661 painting, ‘Easy Come, Easy Go’. Suitably for our times, the figure of ‘Fortune’ stands on a dice. 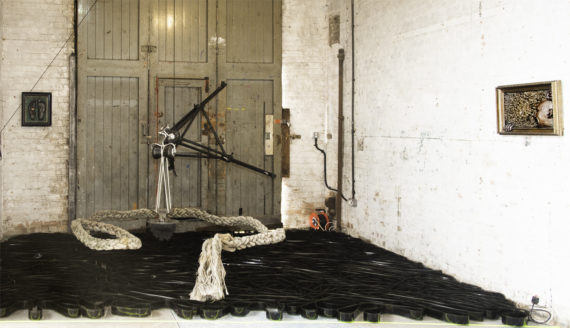 Patrick Goodall confesses to being ‘…motivated by the mania of object rescue, where the beauty of something unwanted and unloved is not to be allowed to  be lost.’’ (Patrick Goodall, NUNO Catalogue ‘Sleep of Reason’ .)  ‘Sleep of Reason’ is an expression of empathy with and love of things, an installation made in order to stand back from it, the touching of surface and structure, texture and form taking  place over distance, through eye and body in a surreal dance-encounter of desire and  fear of loss, an ambivalence homeopathically present throughout the exhibition. Naomi Morris’ piece, ‘Falling through’ was initially the site of a performance piece, a rite of passage. A perverse,  obstructive, web-like body of woollen strings  attached to an umbrella above, is held taut to the floor below by pieces of rubble, through which, in performance, she painfully finds her way against the grain of her own self, against the wilful frustrations of inanimate things. 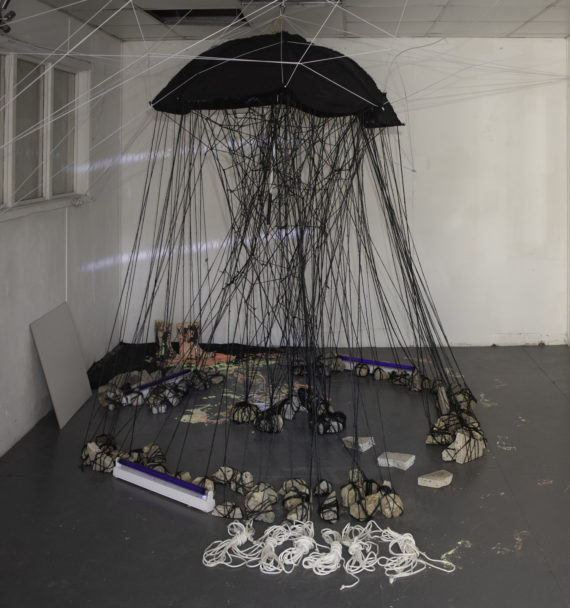 There is a sense in which the making of particular kinds of work reflects a subjective need for rite of passage, a self-testing, a resolution whose need is to be repeated, to reconfirm, rescue, and reclaim the self, even as it slips away. Being in the world is a strange thing.