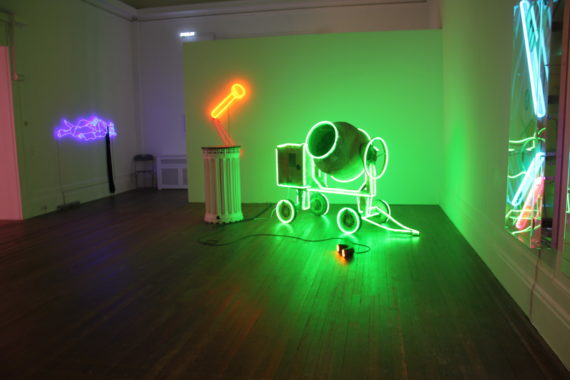 Walking into Neon: The Charged Line was a constant recognition of historical reference bumping into the present – the exhibition was described as a survey of artists’ use of neon from 1960’s to the present day. The Grundy Gallery was founded in 1911, the year that Georges Claude patented signs of illuminating gas in a glass tube (from the parallel Illuminations Archive Exhibition), although neon was first conceived in 1675. The first encounter is with Martin Creed’s Work No. 231: Things (2000)(1) hanging like an advertising sign over the doorway promoting a sense of promise and expectation whilst also bringing it down to the level of the everyday. The work Epiphany Neon (Tandoori) (2003), partially visible from outside, brings into perspective the original use of neon as a lure and enticement, here subverted by Shezad Dawood’s use of pastel.

There is something strange about seeing so much neon in one place. The exhibition moves away from that commerciality to one of drawing, with light. Rooms are themed with the first room being Text, Sign and Language. However, light constantly overflows, from work to work, space to space so that whilst the pieces exist separately, they engage with all around them as well as reflecting in the fabric of the gallery. It accentuates the cornices and other architectural appendages in the traditional building and creating intricate corners of pooled light (2). This coming together of reflections creates a wholeness to what could be called disparate works linked only by their medium. The light creates a lucidity which brings us to Joseph Kosuth who, although his works originate from the 1960’s, appear fresh and contemporary.

Kosuth’s words, set against a grey wall, where individual words and links such as a distillation of the word lucid (3), explored meanings within the context of a fictional text. The perfect design of this lettering, pertaining more closely to the sign, contrast with the wobbly hand-drawn lettering of Noel Clueit’s Um (2015) (4), which relates to text speak and Tracey Emin’s hand written I know, I know, I know (2002). However, it was the sculptural pieces that really stood out especially François Morellet’s work, the formal geometric shape of Triple X Neonly (2012) drawing distinctions with the freeform drawing-like quality of Lamentable bleu (2006) (5). Inhabiting their own space, these works saturated the area with colour, Whilst a little more space around them may have benefitted the viewing process, the intensity of colour contrasted keenly with rooms around it. Conceptual work such as that by Mai-Thu Perret whose Apocalypse Ballet (neon belt) (2008) (6) was part of a larger project The Crystal Frontier, confronts the validity of the usage of neon as a material. Neon, a catch-all term for all gas-filled tubes which, as assistant curator Sacha Waldron reminded me, only red neon is truly neon, other tubes being filled with other gases, integrated with other materials as David Batchelor’s rusty industrial objects which jar with the cleanness of pure neon works. In Evren Tekinoktay’s trio of collages Parole, Bambi and Twiz (2004) (7), there is a complementarity to the use of materials although, somehow, they felt a little dated. Not all totally successful, Jeremiah Day’s LA Homicide: Liquor Store Gods (2010) was conceptually interesting but the neon, a material not designed for illumination, did not provide sufficient light for the accompanying image to allow clear links to be made. The mix of contemporary with the historical, such as the absolute now as in Um to Keith Sonnier’s Pictogram II from 1980, mode of usage, concept and form all created immense dichotomies that were united only by material. Using neon as a drawing tool highlights the line but because of the nature of neon, extends the line from the finely drawn to its surrounds. I wanted to see how these works, placed side by side, physically engaged with the space and each other. I wanted to see how they would fit into the contemporary art world and how they have fared with the passage of time. Neon lures and entices, originally designed to visually pull you in and still doing so even though it has moved beyond its commercial origins. But now, when, elsewhere, almost superseded with the cheap and easy LED light, artists are continuing to develop the language of sculpture, and drawing, through neon to transcend its commercial origins. It flits between function, metaphor and art producing an ambiguity of purpose. Always aesthetically pleasing, a casual word in neon seems to have greater meaning than the same word on a page. Sculpturally, neon fulfils a space greater than its physical footprint. But, extending beyond the confines of the gallery, where the works were not lit until dark, this work at the back door of the gallery (8) seemed to directly relate to the first thing I saw, Creed’s Work No. 231: Things (2000).

All images by Chris A. Wright. Thanks to a-n and Grundy Gallery for the Critical Writing Bursary and especial thanks to Sacha Waldron, assistant curator.