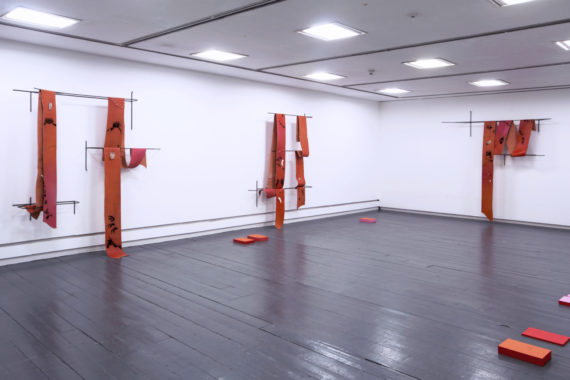 Of particular images, a solo exhibition by the Glasgow based artist, Leontios Toumpouris, is a site-responsive installation comprising works in clay, leather, steel and paper that proposes an investigation into the form of the emblem as a starting point for an independent journey toward perception of reality.

In this exhibition the artist challenges the tripartite structure of the Renaissance emblem, traditionally composed by image, motto and epigram, in order to question the univocal meaning that the interaction of these three elements would ordinarily convey. By dismantling the rigid form of the emblem, the artist symbolically reinstates the previous potentiality of each of its elements and projects them anew into the exhibition space. Such a condition of expectation appears to be designed to act on the viewer, allowing for fruitful imaginative dynamics. In contrast to the univocal meaning that is typically projected by the emblem, Toumpouris’s treatment of the subject matter produces a new organisation of possibilities — a productive kind of uncertainty.

The works in the exhibition cooperate with each other in order to produce a continuous fermentation and germination of internal relationships, which each viewer has to discover. Scrolls on the wall falling down sinuously into empty space establish continuity with mottos printed on piles of paper colonizing the floor, which in turn are placed facing the windows on the world outside. The sense of a process in action is suggested as new affinities are created between freed elements that once formed part of a whole. A sense of new possibility is reinforced by the fictional language represented on the scrolls. Here, signs derived from the convergence of body and clay become a sort of physical onomatopoeia that amplifies the invisible. These allusive/elusive morphemes outline an unfixed code of expression designed to underline the idea of transformation and potentiality that the artist seems to be communicating.

By immersing the viewer in the non-linear environment that emerges from the dissolution of the fixed structure of the emblem, the artist is able to make visible the norms and mechanisms through which meaning is constructed. Acting as a mediator, the artist sets parameters and provides tools in order to encourage the viewer to reconstitute the elements provided in the room and to reach their own understanding of the work. The installation space becomes, then, a sort of laboratory within which the artist puts the critical faculties of the audience to the test.

By equipping the viewer with his/her own tools of definition, the artist shares with the public the responsibility of creation. While he accomplishes the pars destruens of the creative process by questioning the emblem’s structure, it is up to each viewer to fulfil the pars construens through an operational re-arrangement of the elements. Such dynamics intimate that the artist is questioning his role in the production of his artwork. By ceding some of his authority to channel the viewer, Toumpouris opens the way for individual choice and unexpected endings.

Of particular images appears to be an aleatory-responsive installation that allows intricate and flexible possibilities; an ‘open work’ where the tension between bodies and process — the fragmented reality and the fictional language — infused into the space, enhances the authority of the viewer, giving them the choice to make-sense, or to make no-sense, or to decide whether a meaning is really necessary.

Tommaso Ranfagni is a Glasgow-based art historian with a background in the Italian Renaissance. His practice is focused on curatorial activism, the ethics of representation, and questions of community, belonging, and identity. He is currently working on a new project with academics at the University of Glasgow on the global history of poverty and the politics of its representation.