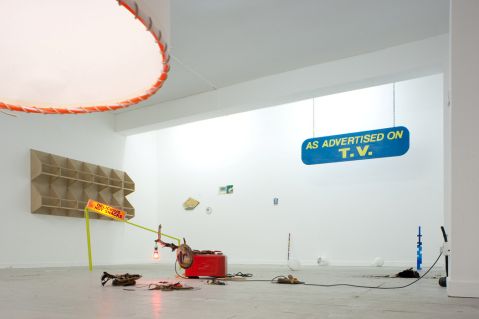 Twelve artists from The Royal Standard in Liverpool, either studio holders or associate members of the group, arrived in Edinburgh from Sunday May 15th onwards, with nothing but their bags and their capacities in making art. The result is the group show ‘Parts Unknown’ at Embassy Gallery, a white-cube basement turn-around representative of Scotland’s East Coast artist-led scene. The show is part two of a city swap and artist exchange (Edinburgh artists affiliated with Embassy had a group show at The Royal Standard in April 2011).

The exhibition is testament of the community aspect of artist-led initiatives, which are proof of how well a city holds on to graduated talent and the inclusive nature of studio groups for artists and designers working across a breadth of mediums. Resourcefulness is key here, the last time I saw The Royal Standard lot was at 2010’s Liverpool Biennale: their work scattered across venues in the city, yet their solidarity as a group still enforced. They named themselves ‘the dependents’ then, adverse to yet reliant upon the Biennale’s infrastructure – as apposed to ‘Liverpool Independents’ a fringe offering of local artist talent out with the Biennale itself.

Here in Edinburgh you got to meet a good selection of the artists and their work, produced during their time in the city up to the opening of the show, all in one place. Found objects alongside constructed and mapped out drawings, a sound installation, and elements of everyday balancing as totems or wands of magnificence (sweet shop coloured paraphernalia sourced from tourist shops in the local area) filled out the space leaving room for light installations and hanging structures towards the centre.

The Royal Standard group definitely made the most of their trip, sourcing, researching and presenting their working processes and their ability to adapt. To this then they are dependent on the support of each other, as one piece of work references the chosen installation of another in the space. This dependency builds a slight curatorial model that sits upon the travelling community they have created, just as much as the materials they use.

Embassy itself works to a slightly different model. Their aforementioned group show in Liverpool entitled ‘Elephants at The Royal Standard’, followed a curatorial construct developed by artist Nicolas Party, who took his pick from Embassy’s most recent member’s show and presented works using his own sculpture as a format for framing and display. ‘Parts Unknown’ would not have come to fruition without a pre-existing network, in fact it is this network that could be seen as a response to Party’s ‘framing’, as The Royal Standard’s artistic relationships set the format of the show.

The Royal Standard’s connection with Embassy is perhaps more solidified now. But the construct of a gallery swap such as this, is something of a waning legacy; moreover it is now often a missed opportunity for artists whose work is just as valid out side of their immediate locale. Yet The Royal Standard’s work at Embassy rings true of how an opportunity overturned and investigated, enables a valid response to an entirely different city in terms of natural and cultural landscape. Leaving Liverpool behind for a week has shown how their work is fostered by a peer group’s proficiency in turning up for the job.

After the private view, upon leaving the gallery you wave goodbye to the artists you have just met (or the works you have just seen) wondering where and when they will pop up next. You recall Mike Aitken’s audio track ‘Rhythm of The Rain’, a sound of somewhat non-sense that hits your eardrums as you enter and then fades as you descend the stairs to the rest of the works on display: Kevin Hunt’s salt covered photo-ephemera and related objects, Mike Carney’s designer edged drawings, Madeline Hall’s collected displays, Sam Venables’s “As seen on TV”, perhaps a nod to Edinburgh’s tourist pull. You remember the ‘Dispersed Monuments’ of Andrew Smith, and thank helium for its anti-gravity balloon display.

Then, half way up the street you realise, Aitken’s sound piece makes perfect sense. Acting as a soundtrack to the bricolage of works therein, it is a brief but solid match of audio to the otherwise visual experience: a new lesson in terms of a different language by artists from another place.