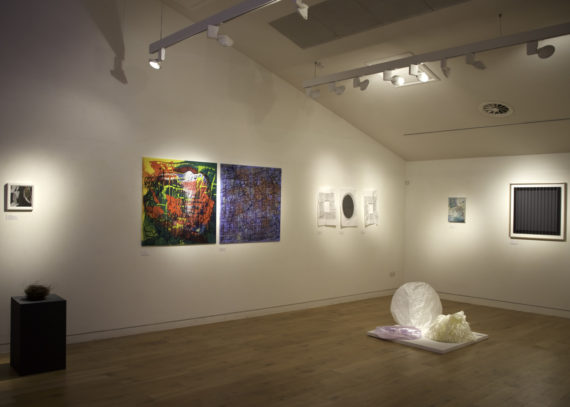 Selected and curated by Kenton Lowe and Tom Penney of Blackshed Gallery in Robertsbridge the Sevenoaks Visual Arts Forum Open is an eclectic and inclusive show, mounted from of a` broad range of content, technique and materials. 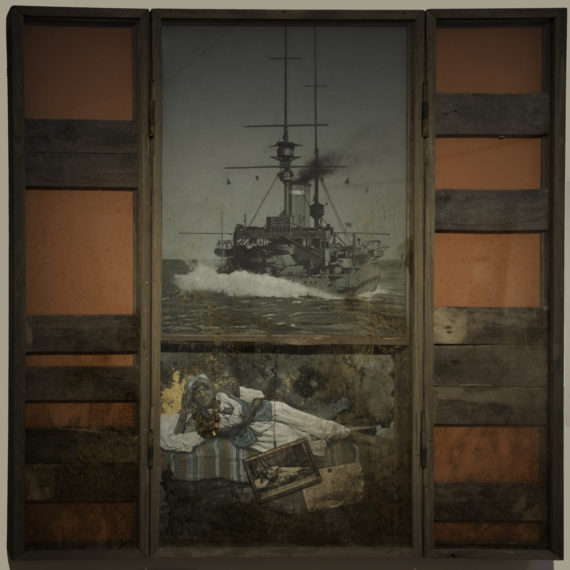 Julian Rowe’s prosaically structured work is uncompromisingly composed, narrative paragraphs bound into visual form, juxtaposed by the rectilinear wooden frameworks that divide and relate them. Abstract passages, striped and rectilinear, engage in a counterpoint of meanings and visual play. He refers to his work as ‘cultural archaeology’ In ‘Sycorax II’ and ‘Sycorax IV’, detail and whole, content and form, form as content, perform an alternating current of reading and experience between and within the narrative and the abstract. He combines found material and painted images to make his observations on British Imperial History. A postcard image from the early 20th century of a North African woman, ‘risque for its time,’ as he explains, objectifies her as she reclines, cut-price Olympia on a divan, gazing into the camera.
The original postcard on which she is displayed is framed, momento-trophy-like and placed below the glass front of the work, fixed to the oil-painted simulacrum of the postcard. Does the painting wrongfoot us momentarily as the image of a woman takes precedence over the image of a photograph, in our capacity for ordering and misordering of value(s)? Franny Swann’s knowing ‘Homeland Security’ is adjacent.
The Department of Homeland Security was created in the aftermath of the terrible events of 9/11. Contained in a Bell Jar, a damaged wasp nest is ‘guarded’ (or is it under attack?), by red wasps.
In the notion of ‘Homeland Security’, does there lay a sinister undertone, covert threat, the term a moral high ground into which the flag is forced? First capture the language. We see, do we see through, the gentle bell jar, apple pie and cookie container, repository of truths self evident?
Meaning is slippery, a slippery slope. If you prick us, do we not bleed? 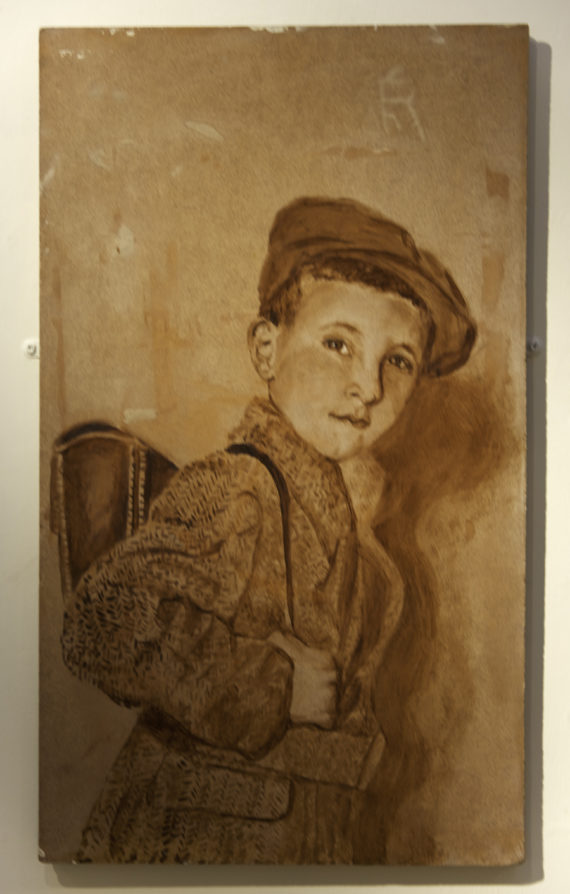 In Andrea Coltman’s work is ‘Peter Aged10 – Hidden child of the Holocaust as a boy of 10’, Peter was born in 1934. His image returns our gaze from its monochrome painting. Dressed as though to go to school, herringbone patterned coat, satchel and cap, the painting was made using paints and brushes left in his estate, on a piece of hardboard owned by him, in sepia, the colour of longing, nostaliga and aching. The little boy looks out at us in innocence. Below the painting, a Slingshot on a pedestal, made by the artist with her father’s Swiss Army Knife, echoes an earlier original made to kill pigeons for food in awful times of 1944.
Are Rosalind Barker’s pieces ,drawings? They are made using a pencil. They have content, but are not depictions. A mirror, A frame, a pencil, paper, each piece comes about, as she notes in her Statement, through coercion, through the forcing of paper to mold and fold itself to alien form and contour. An oval surface, the mirror blinded graphite black, reflects only generalities. Contained by a frame suggestive of something Victorian, mahogany, neither mirror nor image, although drawn not a drawing, its status is suspended, pending.
The pieces, Frames I and 2, similarly, bind tight to a central hiatus, insisting pointedly on loss, absence. The marking that is the frame is formed from myriad short marks-dashes, obsessively done in a manner that denies the original its full identity, allows attendance but denies a voice. The folding that has occurred in the paper attempts to resist, to open out again.
In a contrasting manner, Angela Dewar’s pieces invite us to take pleasure in the material qualities of felt. An immensely versatile and ancient material felt has worldwide application and is said to be the oldest fabric, predating knitting and weaving. Her evocative pieces allude to landscape, clouds, a sense of warmth and softness, and an innocent touching and feeling through the eye. Across the gallery, Maria Marianni Turner’s painting is similarly gentle, an exploration of material through an aerial view of landscape, painted in glazes which emphasise the notion of abstractness through attention to both the formal and the descriptive. Polyfilla breaks the flatness of the piece, adding physicality to implicit space. Christa Corner uses handmade paper through which to engage with ecological concerns in ‘Deforestation’ and ‘Ice Flow’. The dead body of a small branch is sewn into a green and black piece of thick paper, landscape spreading away like wings, rolled paper flows.
Ruth Dent’s work is an engagement with curiosity and play. Her paint runs and dribbles in what she terms the ’broken grids’ which inform her current painterly preoccupations. Working in series, she explores the visual and evocative potential of her material.The titles of her two pieces, ‘The Bluebells are out and it’s Magic’ and ‘In a State of Osmosis’ point to her motivations. Her pleasure in the visual, her responses to the events and processes of nature, underpin a seamless engagement between eye and material, act and experience.
Rachel Wickremer too has an engagement with the nature of materials. She uses Twinwall polycarbonate sheet around which she binds coloured thread to create parallel lines whose contrasts provoke optical effects.
Our worries that arise in the context of digital times reflect those that arose from technological advances in the 19th century.Christina France in her statement, writes that her etching ‘…offers the viewer quietness and repose, a refreshing antidote to our fast moving digital world.’ She describes her notion of the circle as perfect form, metaphor for democracy. Her work connects in polemic spirit with that of Richard Heys whose enigmatically titled ‘Fall From Grace’ , arises from his desire to produce ‘paintings with presence’ through a commitment to richness created by the layering of transparent and opaque colour. He notes, ’ …In the realisation of a finished work I aim to recover mystery and in this world of the known I work standing before the unknown.’
Richard and Christina stake out a position to do with the abstract and the spiritual, the beautiful, and mystery.
Sonia Griffin’s ‘Study of non-colour’ made of clingfilm on a primed canvas , refers to contemporary contradictions in consumer culture. Her sculptural piece is in fact subtly coloured, tints of yellow and violet in the film material, with one that seems colourless but has has a white appearance. This ubiquitous clingfilm is undeniably real stuff, uncompromising in its filminess with a pervasively perverse attractiveness in the forms that Sonia has given it. 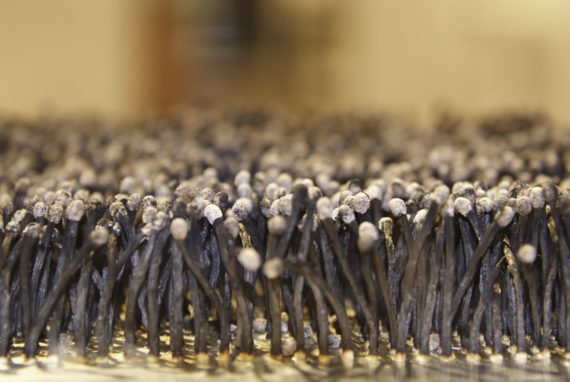 Sue Vass’s ‘Fragility’ is made from burned matches, each of whose whose surviving, minimal stubs of wood stand glued in place on an aluminium surface. The head of a match responds fiercely to its striking. Here massed ranks stand, bending this way and that. Grey heads bow and nod on blackened stems, each twist and turn a response to hidden stresses and tensions released by fire.
Matchstick men, which one of these is which of us? In the making, how many refused to burn and bow? How many crumbled? How many were discarded?
With a nod to the Phoenix, Amanda Hopkins’ piece, ‘Burnt Out’, a nest-like object arises from ‘….debris from torched car abandoned on Filston Lane, Shoreham June 2016, burnt rubber, fused glass, metal tyre reinforcement.’ Variation on a theme of ‘Auto-destructive art’, these scavengings from destruction are now fashioned into the form of a bird’s nest, rust red. In a simple statistical sense, more people may well have seen the shell of the car at the side of the road, than will see the artwork. In our Garden of England, the burnt out car sits as an affront to the drive-by observer, a philistine’s insensitivity in the landscape. But how and why?
Apparently wanton destruction, ecological issues, the problem of beauty, Empire, consumerism, metaphor and symbol, can raise ideological hackles. In the manner of making work, in what the work looks like, in the artists’ styles, meaning arises viscerally, in the mark and in its compositional organs. Those visual dispositions, that are style, have ideological underpinnings; marks are thought. When all the narratives are done, it is what the work looks like that speaks.