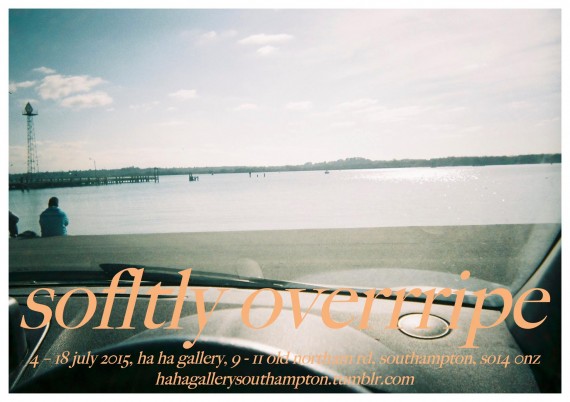 From text-based visual art to conceptual writing, Sofltly Overrripe is a microcosm of the diverse nature of creative work incorporating text. The show’s curator, Lulu Nunn, is the founding director of HOAX, a not-for-profit organisation dedicated to publishing the very same genre-busting classification, both online and in print.

HA HA Gallery occupies the ground floor of a typical Victorian Terraced house; in the first of its two bay windows veteran text artist Kay Rosen has placed 93 vinyl Xs and Os directly onto the central pane. Rosen, noted for her seemingly inexhaustible supply of plays on words, has organised the letters into a grid configuration, a-la noughts and crosses. Or not. Context is provided by the title, Love Letter; these are not letters, they are hugs and kisses. Love Letter is a warm welcome to an exhibition dedicated to an art form that originated amid the dry conceptualism of the mid-1960s.

Rosen emerged into the art world a decade after the beginning of the Conceptual Art movement, as delineated by Lucy Lippard in her seminal reference document ‘Six Years: The Dematerialisation of the Art Object from 1966 to 1972’, and Tim Etchells began showing work five or six years later. Both are exemplary of how each generation amends the ideological and aesthetic values of an established art form; in the case of ‘text art’ the rules had even been overtly laid out within the canon by the likes of Joseph Kosuth and Lawrence Weiner. While Rosen’s work consists almost entirely of text, Etchells’ range includes performance, installation, and film, although language remains his primary concern. His series of Fight Posters comprises ink black texts set against a palate that is elsewhere found only in highlighter pens and hi-visibility jackets. Setting up oppositions such as PEOPLE WITH GUNS vs PEOPLE WITH NO FOOD, and GOOD ARABS vs BAD ARABS, these distinctions and contradictions evoke politically charged news stories and contemporary social phenomena. They also contain the potential to confront the viewer with his or her own prejudices: ‘Women whose Eyes are Bigger than their Stomachs vs Men whose Cocks are Bigger than their Brains’.

Harmazd Narielwalla’s abstract collage, Le Petit Echo de la Mode no.26, takes inspiration from a time before Conceptualism had earned its capital C. Using antique magazine cuttings to present abstract formations of form and tone, the text in his work functions as an additional formal property devoid of referents in the world outside its own frame. This paucity of text is equally evident in James Cabanuik’s Twitching, which consists of a hanging sauna carpet and used towels. When so few words are present, one must give further consideration to the implications of those that are included: SAUNA. SWEAT. TWITCHING.

Contemporary text-based art is often short and instantly decipherable – see Doug Aitken or Ed Ruscha – and Small Talk 3 and Small Talk 6, Jayson Carter’s photographs of the words ‘son of a bitch’ and ‘literally’ as they are projected onto a person’s body, are exemplary of that. Lulu Nunn is aware, however, that text-based art can also be slowed down so that it demands of its viewer more than just a few seconds’ attention. Soraya Fatha’s Heavily, heavenly breath is an audio-sculptural installation that pairs oversized teddy bears with takeaway sheets of A4 paper listing all the words in the English language in which the letters E and A appear together in that order. This physical element is accompanied by an audio-visual aspect – the titular Heavily, heavenly breath – a poem in which each of the phonemes arising from the combination of those two letters is used and discussed, with a subltly building emotional bent.

Himali Singh Soin’s Love Letters to Follies is a collection of a dozen carbon copied, A5 texts which, despite their being dedicated to architecture, manage to evoke human relationships and the myriad emotions implied therein. Being hand-written they possess a personal touch often lost in more polished text-based work; being copies their faded appearance bears more than a hint of sadness. One imagines the artist sitting on low walls opposite these buildings, or sipping coffee behind a rain-lashed window pane (such is the letters’ romance), musing on the building across the street: ‘You don’t kiss you go home and lie awake till you have to get up again’; ‘you wrap around me, twisted, entangled, spinning about my axis, never moving – and always so’; ‘Your body is pixelated’.

Curator Lulu Nunn has produced a mini-survey that demonstrates how far text-based art has come in the half-century since its inception as an art form in its own right. Much of the work in Sofltly Overrripe demonstrates an emotional content more readily associated with poetry and prose than with text-based art, which can often appear manifesto-like in its forthrightness. If Kay Rosen’s Love Letter beckons the viewer in via the first bay window, then in the second – the exhibition’s final space – is its perfect foil; Himali Singh Soin’s Love Letters to Follies doesn’t so much say goodbye as it bids us a loving farewell until next time.