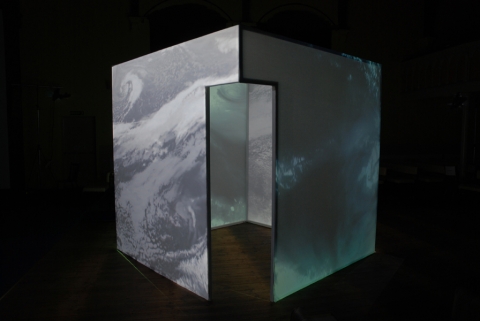 Situated in the interior of Trinity Church, Inverness System is a contemplative and expansive work by Glasgow based artist Del Whitticase. The culmination of a three month residency as part of the ‘Other Side of Air – Arts and Spirituality’ series of residencies in three of the city’s riverside churches, the work combines elements of sculpture, projection and installation to reveal a response to its central theme of spirituality in the modern world. System’s structure; a white cube onto which moving satellite images of weather systems are projected and its site specificity are for me not only about spiritual contemplation but about creating new spaces for engagement with contemporary art. Placing a work of contemporary art in a church setting has implications in terms of audience, drawing in perhaps those who would not ordinarily visit a church and those who might not ordinarily visit a gallery. The opening up of spaces designated for worship by a particular faith reveals a baseline of exploration, that of humanity and the nature of being human. An atmosphere of peace and quiet enables space for personal and collective reflection, bringing weather and natural forces inside the church. The level of direct engagement with a work of contemporary art by the audience within this particular space is hard to imagine in a white cube gallery and it raises the question of architecturally sanctioned access and response to art. Refreshingly here the reverence was for the substance of the work and the questions it raises, not purely because a work is situated within an aesthetic temple or gallery. The way in which religious or cultural buildings are charged with meaning is balanced by the work which takes its inspiration from a universal concept of the spiritual in nature. Weather is a topic that unites us, breaks the discomfort of a first meeting, influences our daily movements, echoes the shift of seasons and is all around us everyday. The piece reflects nature beyond human control raising questions about our global dominance over the earth and our individual sense of the divine. Belief is centred in individual terms rather than being a reflection through symbol or architecture of a particular faith. The images chosen for projection are drawn from all over the world and at first they reveal themselves as abstract, like brushstrokes, black and white tonal movements. There is also a sense in which the images are simultaneously microscopic, can be read like the inside of the human body or macrocosmic, as the earth seen from space. The luminous quality of the projection within the dimly lit church and the painterly nature of the projections moving across each surface evoke a different conception of time than that of everyday life. This work is very much about connection and sanctuary, the connection we all have to nature here within the context of a built religious environment. Functioning physically like a Russian doll the outer architecture of the church houses the installation, accommodated by the removal of pews. The structure can also be entered by the viewer. Standing in that interior space reveals another layer- that of the internal relationship of the viewer to the work and its themes. The creation of site specific work is characteristic of Whitticase’s practice. A work such as ‘Quantum’ exhibited in Glasgow Sculpture Studios (2006) explored the physicality of sculpture and our built environment. ‘Quantum’ played with scale through formal areas defined by colour within the overall structure. Our concept of real and imagined space was also explored in his 1999 work ‘Shaft’ in which a link was established between the viewer on the ground and a direct passage created through the forest canopy to the sky. This work was grounded in the industrial history of the area in which it was created but equally engaged with the spiritual in nature and the tension between real and imagined spaces. In System the artist reveals an approach consistent with previous work including his public commissions but also an evolution in practice, a more interior realisation of this theme not only in terms of physical space but intellectually and emotionally. System is ultimately about expansion of thought and in conception is linked strongly to creative process. What it manages to do is not be constrained by the loaded associations of a designated faith space but to expand them in a way that affirms the value of faith and contemporary art in everyday life. The viewer’s experience of the work is not governed through religious symbol but a universality of experience that binds us all.