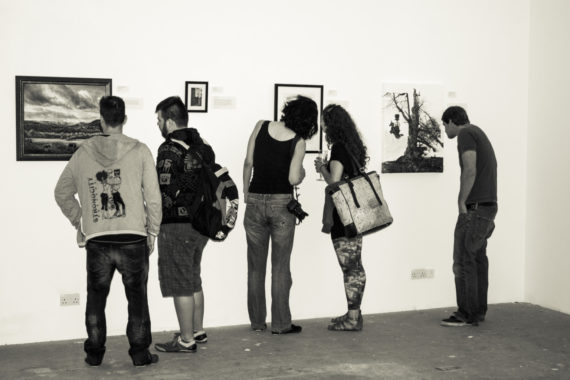 Garry Barker, lecturer at Leeds College of Art and Design wrote a review of the exhibition.  We asked him to give us his thoughts on the show, which finishes on Friday, 19th August.

The Human Condition as an exhibition title that suggests that art can help us come to some sort of understanding of what it is to be human. However, the work on display suggests that something else is now of more pressing importance.

The condition of the world is now fused and moulded with and by the activities of humans. Humans in focusing on their own condition have left the rest of the planet to deal with the unthinking consequences of their actions. It is time to refocus and to think of the human condition as being inseparable from the planetary condition. We will only survive if we come to appreciate and act upon the autopoietic nature of our relationship with the rest of the world.

The images in this exhibition can be regarded as poetic spaces within which we can meditate on what it is to be a practicing human in a time when the highest temperature ever recorded on Earth was measured as being 54 degrees on the 21st of July 2016 in Kuwait. Although these artists don’t overtly set out to confront the various threats that face the world; (global warming, peak oil, phosphate depletion, mass migration, etc.) their work is grounded in a political, sociological and material climate, that means whether consciously or unconsciously, various decisions in shaping images and responding to the material needs of the processes of making, will reflect the specific nature of our times.

As I walked to St Patrick’s studios, I was reminded of much older constructions of ‘the human condition’. I passed through ‘Mabgate’ thinking of that crazy ruler of the Third Race and mother of Oberon, Mab the tyrannical ruler and faerie queen. As I was passing through her gate, I was reminded that at one time other mythical races inhabited the Earth, and that we are late-comers. Then turning onto St Mary’s Lane, a route dedicated to the Christian ‘Mother of God’, I’m reminded that for 2,000 years Christianity had been for many people the umbrella under which they sheltered, a religion that had a vision of the human condition as one of a fall from grace, of an original sin that we all still carry. Finally reaching the studio complex itself, housed inside a building once belonging to St Patrick’s Church, I’m aware that the time of Christian dominance over Western values is now fast disappearing, in this case artists now taking over what was once religious territory.

Perhaps it’s because of these thoughts that I’m immediately drawn on entry into the exhibition to the work of Bruce Rimell, who reminds us of our long intertwined history with the Earth and its stories, his knotted narratives flow with the vibrational energy of matter, his images point to that material flicker that underlies everything and which folds momentarily into spaces of darkness as matter flits in and out of existence. UV sensitive images arise out of the complex surface of his canvas as you scan them with the available UV light tube and we are reminded that underneath all the surface world of perception there are other more complex, unseen forces at work  Rimell is concerned to take us back to our past mythic roots, in order to better understand our human condition, he prompts us to take on a deeper more spiritual awareness. I would suggest however, that we also need to stare hard at the fast incoming future, if we are to preserve our place on this Earth.

Much of this exhibition consists of painting. Painting is an old art form but it can always be relied upon to reinvent itself in the face of changing times. Painters have long been seen as frustrated visionaries, Benjamin Andreas echoing Van Gogh’s need to find transcendence in the very act of painting, but of course discovering that the paint will always be paint, its own material language in the end always reasserting itself over human desires to give it form. Just as we try to control the Earth and shape it to our desires, Andreas’s paintings emerge from the materials he uses. As Milan Kundera wrote, “novels write themselves’, and I would further suggest that the best paintings will also paint themselves, muted greys and traces of perspective grid, trapping his indecisive figure in that moment when it must face the reality of whether or not to step outside that painted door into the real world.

Valerie Zwart’s ‘The Circumspect’ (Bradford) asks questions about whether or not it is still possible to make traditionally crafted images in a media soaked society. In her world Carroll’s Mad Hatter is still metaphorically serving tea whilst nature dies and humans preside over the funeral. Close by on the same wall Susan Plover’s ‘Empty Vessels’ suggesting that humans are no different from shop dummies, never being able to actually shape anything, simply waiting to be clothed by ideas and forces beyond their control.

James Moore’s, ‘You have already gone to the other world’ reminds us that with all our accomplishments all we can seem to do is to turn our eyes elsewhere, Mars is as yet unpolluted by humans, an unspoilt landscape, perhaps the final ‘picturesque’ painting would have to be an alien vision, as our other visions are too mired in what we have done to this world’s reality. It is however a beautiful painting, but in its very beauty we are offered a glimpse of the cancer in the rose.

The figures in Tom Wearing’s Edward Hopper like ‘Apartment 209’, are lost in their work, oblivious to the viewer, they are enmeshed in a painterly surface that partly seduces and yet compositionally withdraws. This double game perhaps intimating the artist’s dilemma, whether to become totally lost in the making of the image, to become one with the becoming of a new found reality, or to try and find meaning by imposing some sort of message on the work. But here lies art’s problem. In many ways it is at its best when it is meaningless. Art works that try to nail down what they are about end up being too predictable, often poor illustrations of doctrine. But does this mean that only by chance will an artwork make that often desired, heartfelt communion with another person?

Rachel Hinds has two paintings on display, one abstract, ‘Jazz Album’ and one figurative, ‘Green and Pleasant Land’, the human condition she suggests is one of shifting possibilities, her ‘Green and Pleasant Land’ is at first sight is a Romantic idyll, the remains of an old industrial town filter down into a green valley, but the sheep and cows that inhabit the foreground of this painting are waiting to be taken to the local abattoir, whilst the industry that once drove the community’s economy has moved on elsewhere. As a distraction it is suggested we may listen to jazz, the abstractions of colour and form opening a doorway into Madame Blavatsky’s grammar of almost total abstraction, a Modernist language that indicated the existence of a level of reality much higher than the merely material. Blake’s ‘Green and Pleasant Land’ is at the same time a vision of ‘Urizen in Chains’, cast down like Milton’s Satan, our world is but a figment of Urizen’s fevered imagination. We now live amongst his scattered bones, our beloved English landscape shaped from the corpse of his gigantic body.

Line Larson realises that in many ways these thoughts are ridiculous. ‘We might all be dead tomorrow’ she cries. The stupidity of painting in the face of a world gone wrong is a type of ‘divine madness’; in a time of the worst excess only laughter can save us. Who would still paint while Rome burns and the ship founders on the rocks? None, but the divine fools amongst us.

Cold and Distant’s ‘A case of Cat-atonia’ sees cats breeding like a virus outbreak and erupting all over a human face, humorously reminding us that our presumed position in the natural pecking order should not be taken for granted. Ruby Tingle’s collage ‘Fungal Bloom’ suggests that perhaps we need to make a deeper pact with nature, become one with animals and plants, jettison the human condition and merge back into the world. But can we hide away from our responsibilities to nature? Sean Williams suggests that nature will fight back. He turns our attention to the back yard, to the non-spaces that are forgotten wildernesses, to those spots that nature is already reclaiming for itself, weeds poking their heads out over the ready ruins of tomorrow, a reminder of how all our mighty building works, will one day be reclaimed by vegetation.

The photograph offers us an alternative approach to the human condition, suggesting an indexical relationship with reality, we are seduced by photographic images that are on the one hand convincing and yet on the other obviously constructed; Kerri Butterworth’s blurred self portrait hovering over a burnt and broken teddy bear, as some form of ghostly reminder that perhaps all objects have souls, a contemporary reflection on the faked ectoplasm photographs taken by 19th century spirit mediums. But in some ways all photographs are like ghosts, Lynn Fotheringham’s ‘Breakfast’ recording a frozen moment when humans become distracted by the moment of eating, that moment now long past, but trapped in chemical time.

Clever Cunst leaves us with a tragi-comic version of the human condition, ‘the human condition’ she lets us know is on the one hand always out of date, her 19th century styled image of a head could have been produced at anytime over the last 150 years and the thoughts that revolve in its brain are those of a post Nietzsche and post Freud world. ‘God wants me to hurt myself’, ‘What if everyone discovers I’m a fraud?’ and most tellingly, ‘I need help.’ Well we all do.

The Human Condition is an exhibition that reminds us that we are all simply materials shaped by environmental forces. The human condition that perhaps these

artists are responding to is one of a particular awareness of time. For a stone, time unfolds itself very slowly, millions of years can go by before it is eroded away or melted down once again into magma, for a mayfly it is but a fleeting day and for humans roughly 70 to 80 earthly passes around the sun. Our perspective is in these terms very shallow but by making physical artefacts that can preserve traces of our actions, we pass on ideas and thoughts to others, and ideas like good wine often become better over time. The ‘Human Condition’ is a timely exhibition if only to remind us that the problem with the human condition is just that, that we over estimate our own importance and that if we are as a species to survive we will need to think less about ourselves and more about the world we have infected.

‘The Human Condition’, an exhibition curated by Rachel Hinds, is on display at ESAs Patrick Studios project space from the 11th to the 19th of August.

Details of the exhibition can be found here: www.thehumanconditionexhibition.wordpress.com