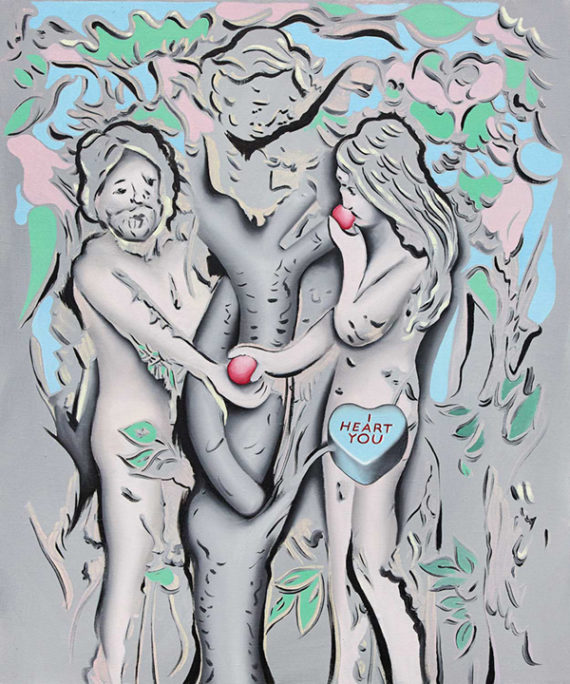 ‘The Immaculate Dream is an exhibition of fantastical landscapes and constructed spaces, dark fairy-tales and silent stage settings. Works by nineteen artists invite us to explore a looking glass world in which pasts are reimagined and futures projected through the various lenses of cinema, technology, science fiction and cosmology. These places are fragile, experimental, romantic, alchemical. All beyond reach…’

47 works by 19 artists in a series of 5 meeting rooms and 2 public spaces is, in the eclectic manner of our times, a conference of styles, techniques, genre, materials and something of the multicultural curated by Rosalind Davis. Its varied  media and execution  highlights the material matter and manner of making something and what the something might mean, form as felt content in itself – how technique ‘appears’, style is manner refined into taste, and taste is judgement in action; there are aesthetic positions  at work, individually  and  curatorially, speaking to a wider social context.

Steven Heffer’s ‘Flood’ greeny yellow, blue, a little ochre, green building shapes outlined by pinky sky and the reflection of a green bridge cut off in mid-span of the river. Odd spatial relationships? Sky gently menacing, looming unsure of its place or space, is both in front of the buildings and behind.   Sky colour from wet sky paint dribbles like an old man in his sleep, dribbles and draws.

His paintings of a flood at Alfriston and a cement works appear conservative, structurally assured, gentle abstract figurations or figural abstractions, rooted in an Englishness of the 20th century which sits uneasily now in the company of Joanna Whittle’s flooded marquees, her paint fluid and sticky, anxiously pushed around, a variously compliant and resistant material. 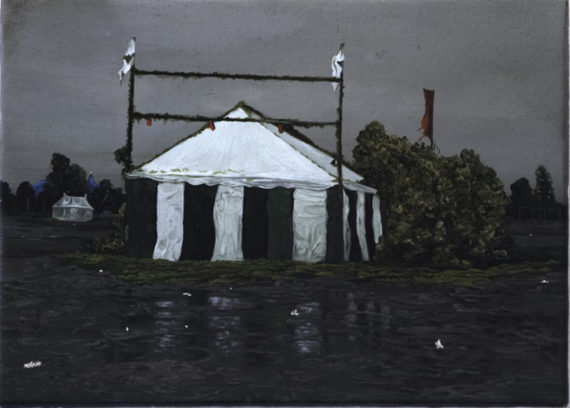 The cement factory, innocent contributor to progress, foundations for living, releases its stream of CO2, unwitting contributor to more rain  steam and speed than was ever dreamt possible. And Robyn Litchfield’s painting,“Ship Creek” of pristine New Zealand forest can now no longer sustain its innocence, agitated  as its waters must be in anxious anticipation of approaching crisis.

Monica Ursina Jager’s ‘shifting topographies 0.5’ offers sight of the consequences, a sometime refuge for those displaced of Alfriston who can afford to buy or have strength to fight their way when the flood rises further, the going gets rough and the battle for high ground gets into motion and the trees are gone.  Terms such as global warming, climate change, seem insufficient.

Graham Crowley’s small paintings in yellow and grey, ‘condensed’ into  white frames  under glass,  intuitively greater in scale than their dimensions, have something of the sublime about  them. 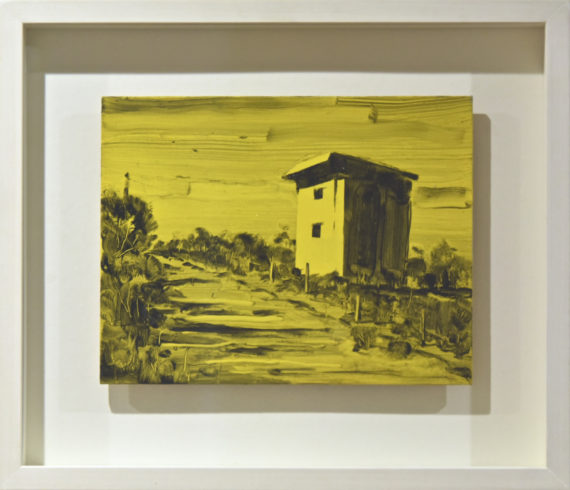 A  yellow ground teased out of  flatness and into space and distance  draws on our capacity to read, and on our reading to fashion what we see, through  the workings of perspective and the brushy implications of context. Trees, barns, shadows…sky earth, things we know, appear to appear from a kind of likeness, brushmarks nudged into vision, willed into the eye, a benign persuasion with maybe a nod to Sizewell’s nuclear power stations, just up the road next to the rising sea.

Elsewhere Guy Allott’s woodcut ‘Robot’ might be the operator  of Michael Coppellov’s  ‘Silicon Valley ‘ control board. There is something of a vain hope for the return of lost innocence in the manner of representation of these anthropomorphised  images. Coppellov’s switches, signs, lights are  dabbed and daubed, a pick and mix of technological sweeties on an anarchic  blue Escher of a landscape, whilst Allott’s reluctant Robot,  a negative space physically and emotionally insecure in the greyness of its indeterminate foreground/background, is a Tin Man on the  Yellow Brick Road to ‘Silicon Valley’. 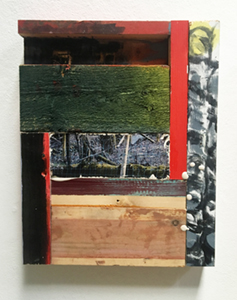 Where might be these photographed places? Google  titles BS35, BS36.and up come postal codes for the Bristol area? But no? Ask the artist and it ought to have been clear – ‘BS’ is ‘Barrier Series’, no reference to global warming, the Bristol Channel, the river Avon…..  a lesson in looking, paying attention and judgement, a reminder that what seems possible may still be unlikely…

Graphic and loose, melancholically, reluctantly,  decorative, Jane Hayes Greenwood’s Adam accepts the apple offered by Eve. Her fig-leaf in this flattened rococo transposition of a medieval carving,  now  a blue love-heart,  proclaims   ‘I Heart You’, unashamedly  decoupling  pleasure from sin and the moral from moralistic stricture,  Love-heart as passionless sign, ambivalent, part emoji, implicitly fickle?’Chemist’ ‘Engineer’ ‘Technician’, Robin Dixon’s nostalgic workforce, painted with the  subdued conversational bent of a 1950’s living room, might find Adam and Eve a little shocking, but in a knowingly, subterranean, bodily way must accept biological connection, anticipate the love-heart, somehow know. The manner of their painting is just enough to set out the parameters of blissful ignorance, a ‘good’ life, to resist the wistful temptations of anarchic desire with  an anachronistic  confidence in how it was  in more certain times pre Roza Horowit’s ‘Trump’ In a scene such that Eve, could she have witnessed its like, might have paused for thought, Donald Trump carries a woman through the Tiaga Forest, with Vladimir Putin looking on. 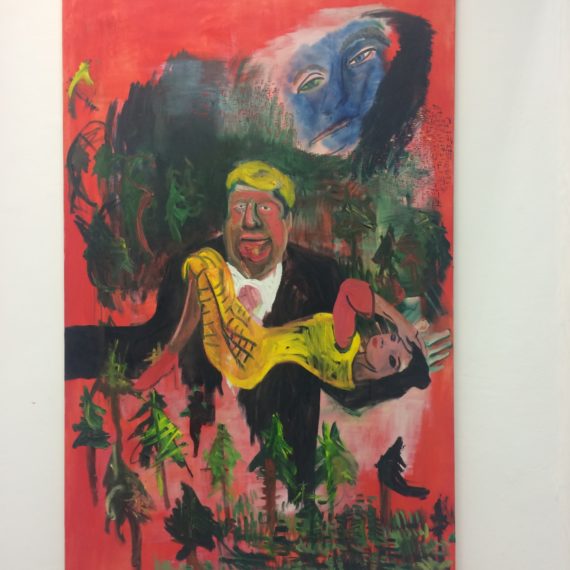 ’Toro’ is the term attached to an image in Cathy Lomax’s ‘Film Diary’ as the presumed heroine appears to lift her skirt in provocative imitation of a teasing matador. A kind of neither/nor/either/or image it is disposed to have whatever meanings a viewer is disposed to bring, to what might  easily be a still of a  woman playing with a child. Her paintings from film stills tease and intrigue. A sense of the  furtive in the cropped images and their quick manner of painting is reinforced by  footnotes – ‘they were in the house of fun’ ….. ‘she had gate crashed’…’..he told her about a sexual experience he had had…’ 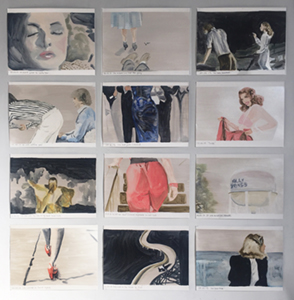 In a further stylistic turn Clare  Mitten’s use of cardboard brings out the best in it, best in a gentle accepting sense. Her 3-D constructions embrace the descriptive limitations of the  material. There is a satisfying ‘just – enoughness’ about them in this pluralism of works, as they bypass existential anxieties, know what they are. 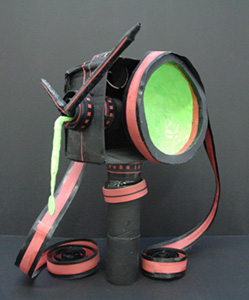 Hannah Brown’s painting of Victoria Park is a poignant reflection on our polarised times, our contemporary condition as we continue our journey around the full circle from Victorian pollutions to our own. Painted with a strong sense of stillness in detail the absence of people in a place visited by 9 million people a year  lends a troubling aspect to the scene. 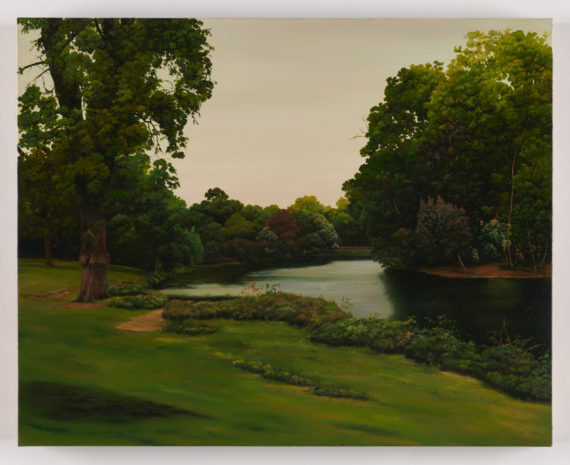 …….’The first official acknowledgment of the need for a park in the East End of London came in the 1839 Annual Report of the Registrar General of Births, Deaths and Marriages, which recorded a mortality rate far higher than for the rest of London, brought about by massive overcrowding, insanitary conditions and polluted air.’

….The report stated: “… a park in the East End of London would probably diminish the annual deaths by several thousands… and add several years to the lives of the entire population.” (https://tinyurl.com/y5t8b9j8) Sasha Bolwes’ theatrical appropriations from Velasquez, humanoid creatures that for all their strangeness are oddly familiar, and for all their familiarity are oddly strange, uncannily alive, exude presence and believability. They cannot  be, despite and because of appearances, ‘disbelieved’. 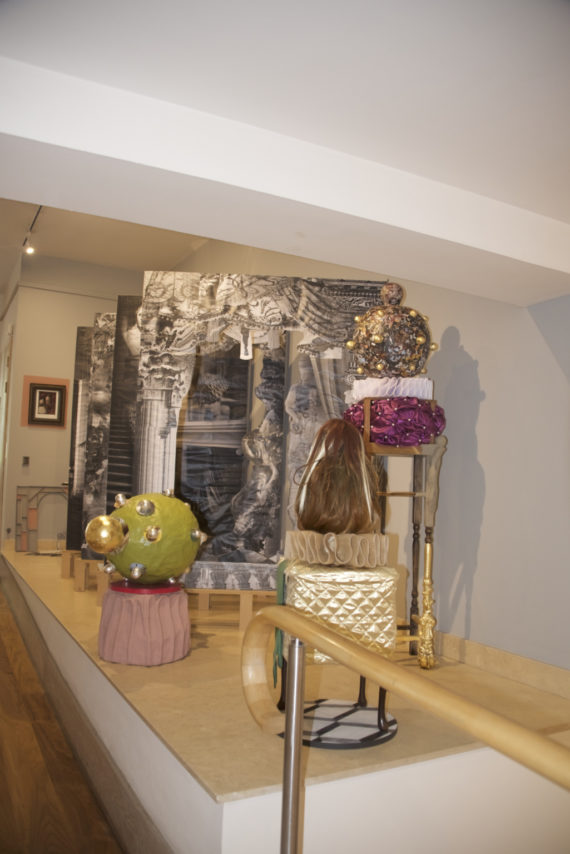 Props and actors wait  for things to happen, the play to start, curtain to rise in an uncannily pregnant historical atmosphere, the whole work  an event horizon just on the other side of coming to life. Painted interventions flow  almost indiscernibly into their source images, convincing  demonstrations of the morphing of one truth into another, model and metaphor for the ways that we believe and are led to believe ’Bobular-in-waiting’ on the other hand, is a handmade alien Miss Piggy, a real thing, (a real thing?) paper and tinfoil, multimaterial cousin to Clare Mitten’s cardboard objects, and from there on, to Guy Allott’s ‘landscape spaceships’, puzzling comings together of unlikely flying machines boarded via wooden ladders, wings fashioned from  wooden flooring, props in a related performance, ships that stand like playthings left in situ after the last game by a long-gone race of children, might have delivered ‘His Gracious Orb/Wanton Fool’ from somewhere in the deep space of Julie F Hill’s Hubble based digital images. ‘Chasms’, folded and crumpled photographs that look back in time. 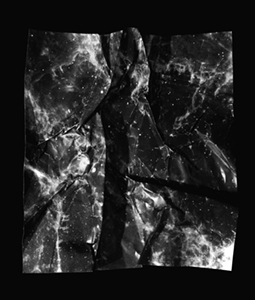 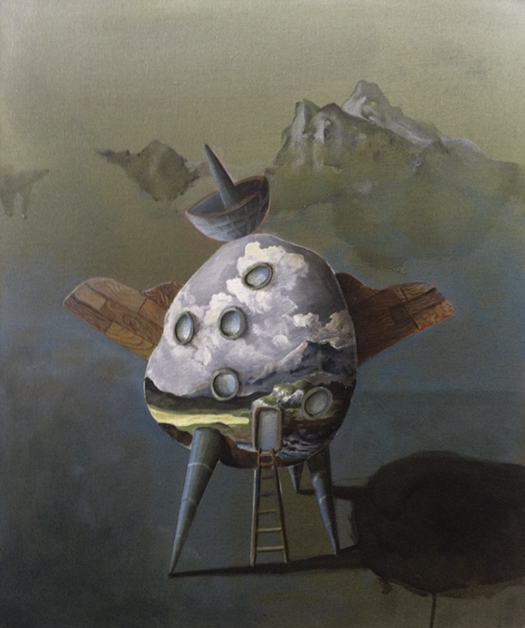 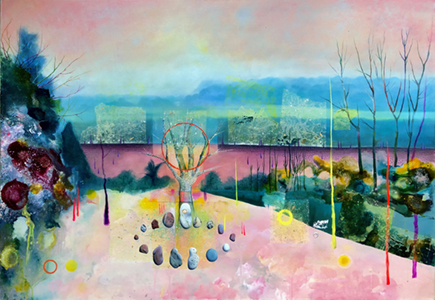 Emily Jane Campbell’s painting ‘Portal’,  an  idiosyncratic landscape of pinks purples violets, yellows and blues,  seems to want to be simultaneously soft and sharp, draw blood and smother, as, softly in a place where no shadows are cast, painted washed illusion presses up against collaged tissue, unreality with the real, masking tape, glitter, gritty texture, a threatening prettiness. A hand-tree hovers  leafless before a circle of ritual stones –  some decorated with foliage, some body-like, suspended in a pinky yellow heaven with blue. 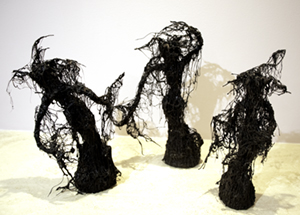 A time of rising water provides nourishment for Carrie Grainger’s ‘Roots’. Forming themselves into self absorbed witch like figures they face each other and dance together, seeming outsiders. Sandra Beccarellis marks are those of an alternative order, in your face, what about this…..what about this….   gestured thoughts marking and making dialectic disputations with surface and structure, think the brush, make the mark, come back again. Creative destruction, destructive creation, now? 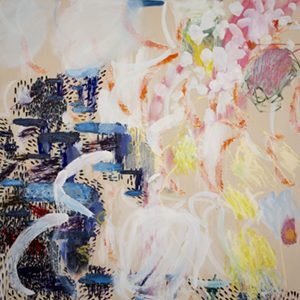 Curatorial concerns, feminist issues , global warming, false news, possible truths, emerge from the stuff with which their messages are made. Nothing is inert, materials are repositories of possibility  –  content is content is content. Matter and stuff speak the work, speak with the voices, accents, tones of their media, of the possibilities of paint, digital processes, and so on, medium as message in itself, something to ‘be’ with. There is a slippery sense of the ways  we are, of the way in which our current social and personal insecurities  arise in the everyday, that sense that our uncertainties and  fears are  rising like a flood around an unknowing  marquee, quietly in the dusk, that Donald Trump’s  busily getting on with things might have consequences for Alfriston.