The Principle of Sufficient Irritation - a-n The Artists Information Company 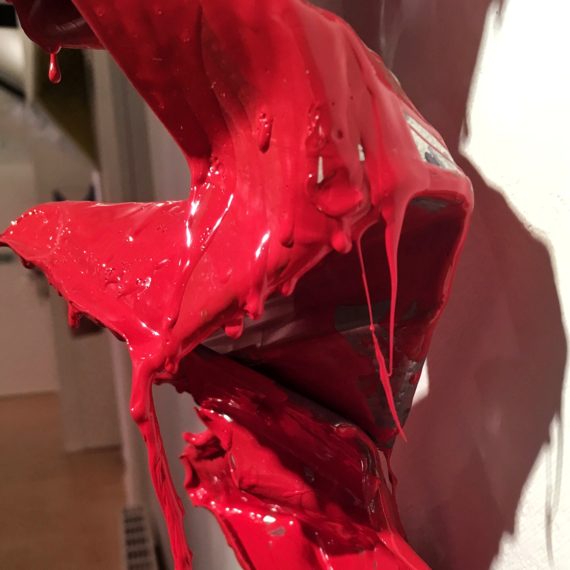 Three artists, Cadi Froehlich, Martin Heron and Darren Nesbit, who were all winners of the president’s price at last year’s open show, showcased their work in the recent exhibition at The Cello Factory. The title ‘The Principle of Sufficient Irritation’ was conceived during one of the artists many discussions during the year whilst preparing for the show. This title was inspired from a short story by Philip K Dick. Within this story he devised the notion that if he could find the perfect ‘irritant’ he could bring inanimate matter to life. This, the artists perceived, formed a connection between their work, as each of their artworks are concerned in differing ways with re-imagining inanimate matter. What is interesting is the way in which they all explore, play with and de-tangle inanimate matter presenting three differing conversations with material objects.

Darren Nisbett photographs abandoned machinery often in derelict spaces and became interested in producing his images in a manner that to my mind, belies the their original reading. By manipulating the scale of the images and using experimental printing processes his work is removed from its original representation of discarded components. His work seems to have become very process driven as he experimented with different materials during the printing process. His final pieces in the show were presented as framed artworks with the photographs printed on aluminium sheets that were scratched and debrided. Thus these metal sheets were now as derelict and degraded as the often abandoned machinery he had originally photographed. Removing the image from its original reading by combining it with an almost 3d sculptural element (metal abraded sheets), the final printed photograph allowed the painterly works to defy a precise and distinct interpretation. This led to an interesting series of abstract works.

Martin Heron plays with scrap metal – manoeuvring, twisting and misshaping pieces of previously discarded metal into resembling something abstract, then finally painting this work. He often allows the paint to dry as it falls, creating drips of what appears to have been molten colour that hang precariously off his sculptures like spiders webs. Martin talks of his attempts to give discarded materials a new life. This he succeeds in doing. However he also talks of his childhood, of being the son of a larger than life, rather strict, dare I say overbearing, scrap metal merchant and his wish to escape this life he experienced as a child and adolescent. I find his sculptural works quite biographical. He seems to be drawn back to the very materials his father sought out, to the material of his childhood. Then he manipulates, and moulds them into something else allowing these discarded pieces of metal to gain a new life just as he sought to do.

Martin’s works brings to mind some of Cornelia Parker’s early sculptural work. In a recent interview Cornelia Parker talks of how she was one of three daughters and with no males in the family her role became one of the ‘son’ whose job was to help her father on the farm. This was a role she wanted to escape from and although a career in art was not one her parents foresaw for her, this is the road she took. Her work ‘Cold Dark Matter: An Exploded View’ is of a shed and its contents exploded – the resulting pieces suspended in a sort of mid explosive time frame is part biographical, as the shed with all its tools and toys have escaped the confines of a building and are now re-assembled into a sculpture consisting of the resulting material fragments. The final sculpture bears little resemblance to the materials original function and become a symbol of the life she escaped from. I wonder if Martin is purposefully driven in some ways to use his work in this biographical manner.

Cadi Froehlich’s interest in our dependence on the technological highway is explored through her often intricate sculptures using various metal wires and cables. In this show she has created a ‘cloud’ of black cables that transmit energy, illustrated by the two small but very important lit light bulbs amidst the large black cloud. Cadi’s concern of how we use the technological age to communicate is very interesting. She makes us think and consider the way in which we often removed ourselves from one to one interaction in this technological age. Her work certainly makes me think of how the super highway of metal cables carrying our innermost thoughts in a blink of an eye has often removed human contact from human communication. There is nothing tactile about this type of communication except the tapping of keys on a keyboard, but no ‘real’ human connection is made. It is the cables that pulse with energy rather than the beating of our hearts; the intonation in our voices can no longer be heard leaving many to guess as to the true meaning of what is being said. Is this why the word ‘miscommunication’ is so often used today? Are we making excuses for our reluctance and perhaps sometimes laziness to communicate in an ‘old fashioned’ way – by actually speaking or touching another human? Or conversely, does the new technology allow us to enter into conversations which we wouldn’t otherwise have had? As a consequence does this present us with new contacts and relationships that would never have happened even in the 20th century? Maybe families have been able to heal old wounds as they can now make tentative steps to communicate in a non-confrontational manner? I know for me this has been true, but there is no doubt in my mind that the super highway has destroyed as many relationships by ‘miscommunication’ as those it has created.
Above and beyond all this one of the consequences of this technological age is the power it has given to authorities and leaders of many cultures, if not all, the big brother mentality whereby we are ultimately controlled by those in charge who have the power to switch off the communication network we now depend on at a moment’s notice.

I thoroughly enjoyed this show and the artist’s talks held on the final day enhanced my reading and understanding of the artworks. Thank you to all three award winners, Cadi, Martin and Darren.
Judith Jones

I studied photography at the Arts University Bournemouth gaining a Master’s degree (distinction) in 2009. I was elected a member of The London Group in 2016 and have exhibited widely in Canada, London and Italy, including The Royal academy of Arts and The Royal West of England Academy in Bristol. Working in mainly photography my twilight series examines the dialectic between the outside and inside and with the conflicts of private and public spaces. They explore concepts of exclusion and isolation, fear and uncertainty. Seemingly mundane vernacular spaces can hold a myriad of memories for us all, some of these spaces we may approach with fear or excitement, or simply a sense of familiarity.