The Water Margin, and the vision of SaySay.Love - a-n The Artists Information Company 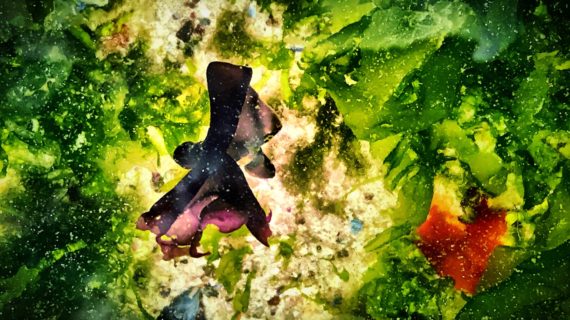 Water is life to us, we cannot live without it and it has shaped our world, marked our pasts and our futures. But it also has a life of its own, as SaySay.Love’s work shows us. “In these images you can see the sensitivity – there is personality, a definite energy in water, you can see and feel it”.

The images are abstract pictures, about 60cm by 100cm, inkjet printed on classic art paper, but they are not art, says the artist. Taken on his iPhone for the spontaniety that allows him to respond immediately to nature, they may not even be photography because they have been drawn out of often a tiny natural event in which the photograph is only a part of its making. Another part is the processing of the image, in which he uses the Apple enhancement tool Enlight to work the iPhone images, bringing out colours and shapes rather than manipulating them with applications such as Photoshop. But chiefly it is the eye and imagination of SaySay.Love.

The images have been seen this year in Cape Town, Amsterdam, Moscow and London. They are not for sale in the usual sense, but those available can be acquired for a donation to the charity WaterAid. And they have had other manifestations, with the South African couturier Jacques Lagrange collaborating with SaySay to create a collection with the images printed on fabric, shown at International Fashion Weeks Amsterdam in May, 2018.

The images, and there are 40 in all each in editions of only three, are part of his mission to make us aware of the preciousness of water, not only as the vital sustenance all living creatures need and is being wasted, but of the intrinsic and beautiful life of water: “Somebody said, what I see in your pictures is your heart and your soul” he says. “There’s nothing more, just that”.

SaySay.Love is the assumed name a former entrepreneur and venture capitalist adopted when he turned his back on the commercial life. He is actually Berlin-born Joerg Duske, 56, who was behind an app that allows drivers of electric cars to find and pay for energy supplies at a touch, sold on to a Finnish conglomerate. He retired at 50 and divides his time between Germany and Cape Town in South Africa, where his mission began.

“It’s very scary,” he says. “Last winter in Cape Town was the third winter of drought, the third winter when there was simply not enough rain for our needs – there are 4m people in Cape Town – and the authorities started to regulate supplies to encourage people to save water. Finally, in March-April of 2018 we halved the consumption of water because people were really engaged to save it”.

It is a stark challenge, how a city of 4m can live without water, and the city announced the prospect of Day Zero. “We were told when Zero comes they will install 200 water collecting points,” SaySay says. “You can draw 25 litres of water a day; divide 4m by 200 and you get a queue of 50,000 people standing there every day and carrying away 25 litres of water – 25 litres is heavy and 50,000 is a lot of people”. As a result, cars stayed unwashed, gardens were allowed to turn bronze, swimming pools were unfilled.

But Day Zero was postponed, and people relaxed. They lost belief in the authorities, the press and media made jokes, Capetonians no longer took the threat of brown-out drought seriously, and consumption has begun to rise again. “But it’s not fake news, because the reservoirs are empty,” says SaySay, with rising passion. “When a city has no water there is no more life. There is no sewerage, cholera will break out, this would be the beginning of apocalypse. We all hope that will not come true, but we need to be aware”.

In December of 2017 the BBC analysed the situation globally and found that Cape Town is only the tip of an iceberg, and that 12 other cities around the world are at risk of running out of water in the next 20 years. Among them are Moscow and London.

The exhibition has been seen in Cape Town and Johannesburg, and an element of its presence in London (where 15 of the images have been exhibited) and Moscow has been the 15 glass bottles laid out together, each with a message from South Africa. “Be grateful for the running tap water,” writes Maria Stones; “Great lesson learnt and a major wake up call for the world!” says Dominique Geyser; “I never thought a running tap would cause me anxiety,” says Anet Ahern.

There is no apocalypse yet on the horizon, but there is still water in all its moods, shapes and behaviour, and all these images are caught in nature. In The Surgewe are on a surfer’s wave, but also on the shoulders of a soaring eagle circling its prey. In The Blueswe see a lunar landscape that on a closer look are bubbles masquerading as craters. Foreboding is a glassy sheet, moulded it seems into a landscape by a sinister paler shadow in the dark deep. The wave of The Moment Beforeis the open jaws of a slavering monster.

But then then the waters can be playful, and Delightis a spray of electric tendrils of light reaching out to us;Specimen is two sandbanks tickled by trickling water, that could be basking fishes or entranced lovers.

All his life SaySay has loved taking photographs and enjoying the effects he could make, and for most of that time he has been unaware of a rare congenital defect he was only told of when his five-year-old son was diagnosed with the same condition, one that means he can only see in two dimensions which limits his concept of depth, speed and distance.

“I don’t know if it has affected the way I see images, because I have never seen them in any other way, but it may be why I am so acutely aware of colour and shape,” he says.

“The photographic vision allows a change in the perception of one’s own life – the ephemeral made still for communing. By means of photography, the present finally lay open before me.”

‘The Matrix of Water’ is open until 26 May at The Coningsby Gallery,  30 Tottenham Street, London W1T 4RJ Open Monday-Friday 9am-6pm and 9am-4pm on Saturday. See more about SaySay.Love’s work at www.saysay.love Donate to WaterAid at www.wateraid.org Call Jessica + 44(0)7939 226988 to purchase works for WaterAid.

Alistair Hicks is a writer and art curator. He was Senior Curator at Deutsche Bank for 20 years and is an international curator.