The Ways of Folding Space and Flying by Moon Kyungwon and Jeon Joonho. - a-n The Artists Information Company 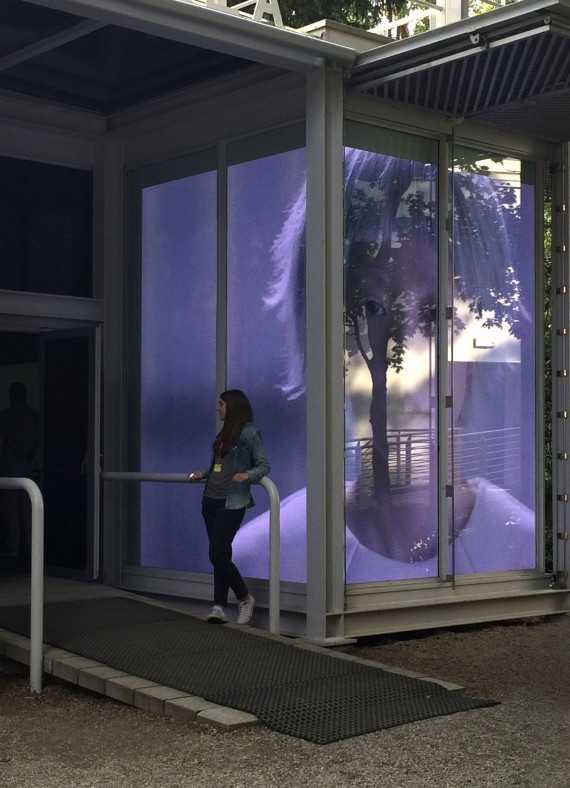 The Ways of Folding Space and Flying, a project by Moon Kyungwon and Jeon Joonho, Korean pavilion.

A caped Venetian walks out of the darkness holding a candlelit lamp, surrounded by small arched windows to the top of the room in which the HD video plays on a tall upright screen.  The sound of metal being struck turns your attention to one of two large screens behind you in the main room, and through an ornate oval picture frame on a highly patterned white on blue wallpaper, a man is hammering metal. This provides yet another window back to the Venetian, as the artisan briefly appears in the flickering light of the lamp.  The William Morris text News from Nowhere (1890) previously referenced in earlier works springs to mind here, and in particular the excerpt “a vision rather than a dream”.  Rather than the heady times of Venetian bustle through trade and the exchange of ideas, we are encapsulated with the remains of the living in what appears to be a hermetically sealed bubble with all the visionary zeal of a utopia turned dystopia.  As the female figure stares back at herself next door, her head disengages from her body via a grid of mirrors tilting at various angles, reflecting not a fractured self, but something more akin to Mary Shelley’s monster, less attached to all its parts than might be hoped for.

The Ways of Folding Space and Flying is the seminal element of a larger project, and seemingly continues the themes of earlier works, in which following a catastrophe on Earth, most of the world is under water, and the majority of humans have died.  Previous texts provide information on this as a world left in chaos, where all order, values, national governments and social systems have collapsed and a small number of corporations maintain a new system of human society competing with one another to acquire hegemonic control of the world.  Survivors are forced to complete dangerous tasks to attain citizenship from any one company – in previous works archiving pollution samples from the ‘outside’, which by now is a dangerously toxic earth.

The female figure rendered in the work, whether droid, or human (she drinks water, so there’s the possibility of organic life still) appears to be one of these survivors, with the ‘requisite characteristics to carry forward what is necessary for human survival’.  She resides in an HD rendered white cocoon, with all her domestic requirements taken care of.  We view her in the Giardini as if trapped inside a killing jar, looking into a laboratory type environment through transparent walls, which in turn reveal the surrounding pavilions in the video projected onto the walls inside.  She’s been isolated for so long that when she tears away the façade from the screen in the main space and peers back out at us, staring in, there isn’t the slightest flicker of recognition – and she’s good at practicing emotional output.

In one repeating episode the tips of her fingers tremble, ever so slightly, as her antennae lights up, and she awakens, recharged.  She continues her small tasks without emotion, running the video enhanced treadmill to stay in shape, drinking the occasional glass of water, with the equivalent of alka-seltzer for food, and following the repetitive routines that suggest an unending circularity.  She appears, more than anything else, terribly alone. 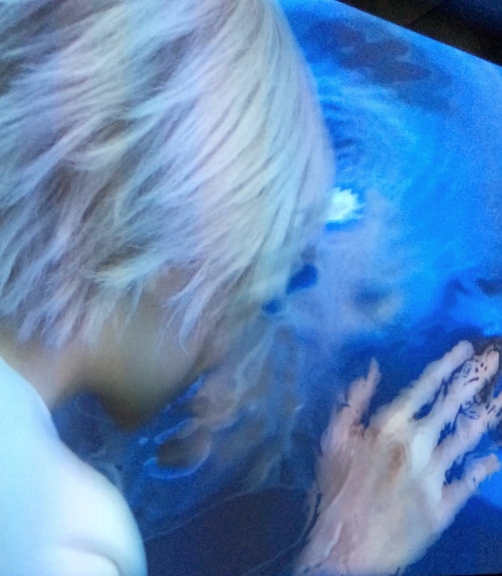 The unfolding multiple narratives converge at a certain point where she becomes aware of a strange blue ball floating above the floor, and curiosity gets the better of her as she plunges her head into the viscous blue liquid of the strange object.  This encounter initiates the next step, as her creative potential explodes via her own screen as she models light beams into a cluster of lines reminiscent of a particularly modern aesthetic (and it’s absence of content).  As her rush of excitement turns to slow recognition of the now familiar motif, we follow her to find a rug on the floor, also present in the exhibition space, upon which it is also figured, pointing perhaps to periods in history where design and art converge.  You wonder if the cycle has just been completed, and whether her creative act has amounted to recreating this motif, perhaps suggesting the limits of art in a particularly 20th Century context, as the concept of the individual, so complicit in the autonomy of art, also seems to have shifted to an altogether different characterisation.  What remains absent is the complexity of new possibilities for art in the context of the 21st Century and beyond, and instead our attention is drawn to who may be paying for her sustained living requirements, and whether one might find that motif on the back of all appliances in the tomb she inhabits.

The dreaming that the two artists Kyungwon and Joonho reference with the Korean words chukjibeop and bihaengsul, where bihaengsul means to levitate and fly, and chukjibeop means a hypothetical method whereby one can travel substantial distances by folding the earth, seems caught in a particularly sticky flytrap.  The video layers continue to loop, briefly conjoining through time, as the slick anodine rendering of a particularly lonely HD hell repeats the terrible end, not of the world, as the lagoon and the Giardini’s pavilions are still out there, whispering soft indictments of national power, but any potential for escape at all.