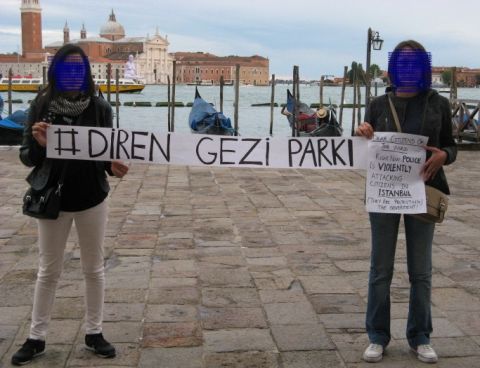 Much has happened in Middle Eastern politics since the last Venice Biennale- so how will the countries that have experienced uprisings present themselves at the world’s biggest art event?

The island of San Servola is a world away from the frenzied pomp of the Biennale previews, where the who’s who of the cultural and economic elite clamour around whichever national pavilion is pouring the most Prosecco, serving the best canapés and offering the most easily digestible art.

Just a ten minute boat ride away – the small, green, fragrant island of San Servola is home to the Arab-Syrian pavilion. Judging by the complete absence of any visitors- it may as well be ten hours away. Perhaps this is a metaphor for the plight of Syria- too difficult, too much effort- so let’s not bother.

Presumably Syria made the financial commitment to partake in the Biennale long before the current crisis began. We can only imagine what happened to the original plans for the exhibition and what became of the organisers and artists who were due to be a part of it. Instead, the curator, the commissioner, the sponsors and the majority of the exhibiting artists- are Italian.

The exhibition entitled ‘Cara Amica Arte’ (‘Art, Dear Friend’) apparently refers to artists from different cultural backgrounds being ‘united in a heterogeneous prism of pop and metaphysics’(1). In the face of 80,000 Syrians having been recently slaughtered this seems trite and inappropriate.

Given the logistics of organising an exhibition from within such an utterly devastated conflict zone perhaps the only alternative was an empty pavilion. But why not invite the privileged and powerful to come to this peaceful island, inhale its jasmine-infused air, stand in an empty space and reflect on why it is empty?

And so to another land that knows all about exclusion. As an unrecognised state, Palestine is not deemed worthy of a national pavilion. Two Palestinian artists show in ‘Otherwise Occupied’, an independent exhibition that is part of the ‘collateral events’ held in hired venues throughout the city.

Aissa Deebi’s film ‘The Trial’ is a re enactment of the 1973 trial of Palestinian poet and revolutionary Daoud Turki, an Arab citizen of Israel who was tried for treason and sentenced to 17 years imprisonment by a state that refused to recognise him as one of their own.

In ‘Giardino Occupato’ Bashir Makhoul invites visitors to occupy the gallery garden by making cardboard box houses and adding them to those already stacked in teetering settlement-style towers. After the largely lavish art seen elsewhere in the Biennale it is hugely refreshing to see a participatory, cheap, simple idea. It remains to be seen how the piece will evolve as the ever increasing boxes are exposed to the elements over the next five months. Makhoul tells me that whilst he bemoans the fact that Palestine is not a legitimate part of the Biennale, it is preferable to have an independent exhibition as the national pavilions are too constrained politically.

Sanctioning by state-run funders is rife. In the Eygptian pavillion, tourism is clearly favoured over any hint of tumultuous times. Apparently even the curator resigned from the project, saying that the selection process for artists was not transparent.

The Kingdom of Bahrain, a newcomer to the Biennale, is more progressive. Drawings by feminist artist Mariam Haji and Waheeda Mallulah’s images of a hijab clad girl in unexpected settings, point at the isolation and oppression of women at the hands of religion. The catalogue states that Camille Zakhari’s fragmented photographic collages of lives torn apart refer to the dislocation experienced by immigrants. In the light of recent unrest in Bahrain these images could easily have an alternative reading.

The Iraqi pavilion doesn’t shy away from politics either. In ‘Welcome to Iraq’. Abdul Raheem Yasir’s cartoons are humorous critiques on Iraqi life and politics. In the photo series ‘Saddam is Here’ (2010) Jamal Penjweny depicts Iraqi citizens holding a mug shot of Saddam over their faces- most striking is a man in a butchers with carcasses strung up around him, but with no blood on his clothes. The series suggests that the influence of the dictator lives on in everyone’s lives.

Penjweny’s deeply poignant documentary film ‘Another Life’ tells the story of Kurdish traders eking out a terrifying sub-existence smuggling alcohol from Iraq to the Iranian border on donkeys- the only work that they say is available. ‘I wish they would shoot me in the back’ says one young man who is tired of risking his life, having somehow evaded the bullets of customs police for 12 years. ‘You get paid for it, you pay with your blood’ says another, as the end of the film proves. Is this the kind of life that the Kurdish fruit-sellers in my local market were returned to when the UK Border agency recently made a sweep on the market? How selling fruit for a pittance in the freezing UK winters must have seemed like heaven.

The British Council, who are partially funded by the Foreign & Commonwealth office, censored Jeremy Deller’s work for the British pavilion featuring the phrase ‘Prince Harry Kills Me’. A move that Deller agreed to and that suggests that the royal family, the military and the British government are above artistic criticism.

On the last evening of the preview I pass two solemn faced young women standing silently by the canal, a long homemade banner stretched out between them reads “DIREN GEZI PARKI -Dear Citizens of the world, Right now Police is violently attacking citizens in Istanbul (They are protesting the government!)”.

I ask why they don’t hold their protest within the Biennale walls where the rich and powerful are gathered. They tell me that they asked the Biennale authorities if they could protest silently outside the Turkish pavilion- they were refused permission.

The Turkish pavilion’s exhibition by Ali Kazma, whilst ironically entitled ‘Resistance’, is all about how we manipulate and control our bodies. Kazma’s images of body builders and tattoo parlours will now be replaced in many minds with images of Turkish bodies being controlled by water cannons and tear gas.

Due to open in three months time, how will the Istanbul Biennale fare now? Entitled ‘Mom, am I a Barbarian?’ it states that ‘the notion of the public domain as a political forum’ is its focal point (2).

How will Turkey present itself at the next Venice Biennale? Will Turkish artists also be reduced to pawns in an attempt to try to resurrect their countries 29 billion dollar tourist industry?

As I watch passers by engaging with the two young women’s protest, the Venetian sun has appeared for the first time in days and is setting on the other side of the lagoon behind them. Ready to Rise Up again tomorrow..