26/03/21 we had a session on our exhibition proposals, see initial notes from session below. In relation to this module we have to create some installations or drawings/collages. I was really interested in creating both drawings, maquette and actual installations. […]

Carrying on from Richard Serra and Carl Andre, as part of the series of minimalist works, I included that of  Robert Morris. Who died only 2 weeks ago at the age of 87. His work was also typically macho and […] 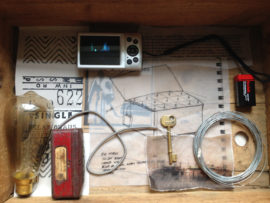 Create a box that describes your current practice

‘tell me about your mother…’ began during a one year residency at the University of Nottingham in 2012/13. The project seemed to be a natural progression for me (my work having previously focused on my relationship with my son), reflecting […]