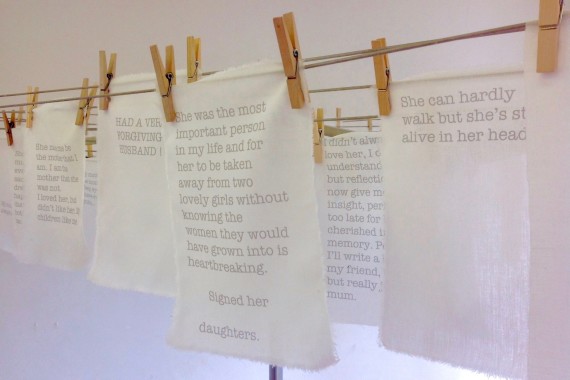 ‘tell me about your mother…’ began during a one year residency at the University of Nottingham in 2012/13. The project seemed to be a natural progression for me (my work having previously focused on my relationship with my son), reflecting upon the mother’s position from the perspective of the child as an adult.

During the residency, I began by collecting stories, thoughts and memories from students, tutors, artists and friends; recording their experiences through videoed interviews and discussions. These were used to elicit ideas and source material, and towards the end of the residency, I was able to show some of the outcomes during a solo exhibition at Banks Mill Studios, Derby. 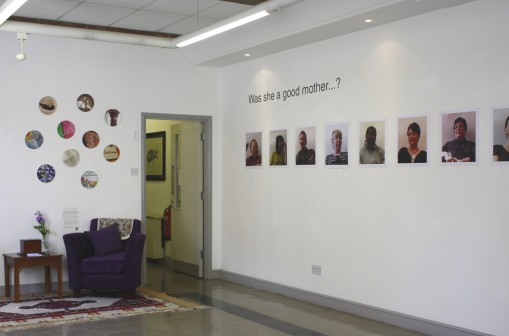 The project then began to grow, as interest in the subject area increased. However, there were weaknesses – I was aware that using video to gather content was both limiting and restricting, and so I wanted to find a way for others to become involved in a more anonymous way. I adapted a wooden box, commissioning Phil Neal to carve the project title into the box lid to give the appearance of a ballot or suggestion box. I then used this to collect written comments, and it formed part of an installation, which I began to exhibit throughout the UK. 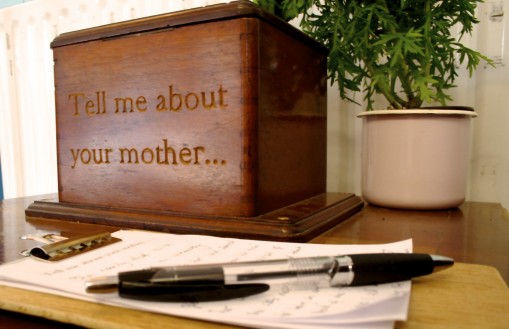 The installation also consisted of a purple armchair, a lamp, several rugs and a small table; my intention with this pseudo-domestic setting was to create a familiar and comfortable atmosphere in which people would feel able to be more candid and open, and therefore the contributions would be real and honest. I found this to be very successful and I began to accrue an impressive collection of small paper sheets, each with a unique experience, comment or memory.

I choose to display some of these at different venues, alongside the installation, although the presentation has differed depending on the location and setting.

Having spent several years working on this project, with public interest increasing after every exhibition, I reached a point when I felt external assistance would be beneficial as well as valuable; hence applying for the Re:view bursary.

In my proposal, I identified two specific areas: professional development and artistic critique, and had several people in mind who might be both able and willing to help me with the project.

I was fortunate to be introduced to Elizabeth Hawley some years ago, and having had discussions with her in the past, approached her with regard to the area of professional development. I found Liz to be immensely insightful and pragmatic, with a great skill for coaching without imposition. I am very excited to be having our first meeting tomorrow…