It has been a real struggle finding local glass working facilities. Having done an AA2A residency at De Montfort University Leicester in 2018 I  had hoped to work with their brilliant Glass Technician, Jill Ellinsworth again but unfortunately this would […]

Came across an old article on the ‘National Museum of Scotland’ using QR codes as a way of getting visitors to better access and engage with their collections. It got me thinking how I could somehow incorporate QR codes, especially […]

As there are so many great animals to choose from and research for potential connections, my choices are a bit random. I feel like I am spinning a wheel and waiting for the dial to stop on a particular species. […]

Fruitful conversations and online research have lead to quite the reading list! I’ve begun “Museums in the Climate Emergency” by Steve Lyons and Kai Bosworth and by the time I finish that I believe I’ll have myself an argument or […]

It’s been quite a week! I feel I’ve made lots of progress although admittedly much of it has taken the form of scribbled notes, sketches and thoughts ripening into ideas in my head. It was good to touch base with […]

Discussing feedback and evaluation ideas with friends and family. Public comments are really important to me and I have found that if I invest the time and effort in the design then I get a higher response rate. If I […] 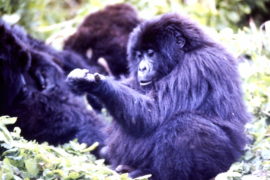 This A-N Bursary Time Space Money will allow me to work closely with Lapworth staff responding innovatively to the museum’s fossil collections. It will enable me to explore the environmental potential within my work through collaboration and learning new techniques.

I’m interested in the notion of Nothing, and what nothing is? I imagine that when I look into darkness or pure black, the absence of light is the boundary of the universe, creating a memory of what it was like before Being. My […]

Tues 21 May It’s hot already so I make an early start and head out east towards the cemetery (an old family habit). It is huge, scruffy and busy. Shoulder high wildflowers sprawl across the site, littering the paths, choking […]

Sun. 19 May Start the day with breakfast in the garden and S, who runs the hostel brings us warm cheesy dough pastries straight from the bakery, greasy and salty they are ballast for the day ahead. His lovely wife […]