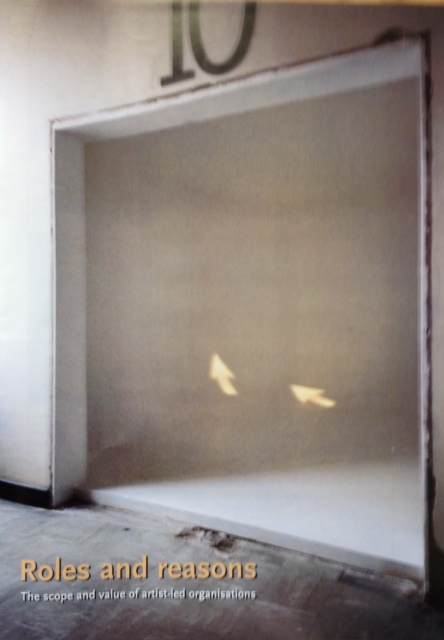 These and the case study summaries total some 60k words of text and charts which do not readily translate to a blog post format.

Within the case studies, similar aspirations are attached to the work of artist-led organisations. These are said to “create ambitious projects which involve a wide range of audiences”, “make an excellent contribution to delivering arts provision in the community”, “play an active role in stimulating and contributing to debates… on visual arts practice and intervening in the wider architectural fabric of the environment…”, “[help] people develop confidence, new skills and abilities they didn’t know they had… opening up new opportunities for individuals and groups” and “providing important resources for artists, schools and others in the community”. On this front alone, artist-led organisations would appear to have the ability to offer significant contributions to future visual arts provision, and thus be eligible for A4E funds.

Artist-led organisations, however, can claim to be playing an important role within the arts environment as a whole. The case studies demonstrate that these groups are concerned with developing new ways of producing and presenting the visual arts and to do this, are committed to building and sustaining relationships with communities of people and other interest groups. It can be argued that a greater investment in such work by the arts funding system is justified because it not only contributes to the overall vitality of the arts but supports the generation of ‘cultural capital’, the product which arises when a strong sense of artistic vision, ambitious approaches to the creation and presentation of work and the willingness to be experimental are combined with a passion for self-development and creative success.

Given the likely impact of the newest lottery scheme, it is relevant to comment on the potential for artist-led organisations to access it. The Arts for Everyone (A4E) scheme (1) will from 1997 offer a valuable source of funds to all those concerned with audience development. The scheme will fund one-off projects which:
• encourage new audiences to experience high-quality arts activity
• encourage and develop participation in arts activity
• enable more young people to be actively involved in arts and cultural activities
• enhance creative potential through training and professional development
• support new work in appropriate context and to enable it to develop its audience.

Significantly, A4E Express aims to work on the notion of ‘a lighter touch’ than is generally the case within the arts funding structure. This is because those who have developed it have recognised a need for arts activities to be engendered by a much broader cross section of arts and community organisations, and that the methods generally used by the arts funding system to solicit and assess ideas may be off-putting to those who are not currently on client lists. It is estimated that A4E could double the number of applications the arts funding system now handles and by doing so, have a major impact on the scope and nature of arts activity in the country within a relatively short time-scale. Overall, implementation of this new programme suggests there could be a gradual dissolving of the existing hierarchical arts funding systems and structures in favour of methods which ensure that arts provision permeates in a more grassroots manner, within and outside the urban centres of population.

In this way, the philosophy underlying A4E has distinct similarities with the underlying principles of artist-led practice. Both are premised on the requirement for the arts to have an impact on, and relevance to, audiences which are more broadly defined, with professional arts practice providing the key resource. Both also seem to have acknowledged that the arts funding system has developed a tendency to proscribe arts provision, rather than to formulate strategies in response to the artistic activity and creativity around them. Notions of unpredictability and therefore the excitement of the new also pertain to both. A4E describes this as the intention to “add a new kind of energy and innovation to England’s arts scene…” and “refresh the arts other funding systems cannot reach, by opening up… new opportunities”.

(1) See Arts for Everyone information booklets

There are, however, tremendous differences between the ability of a new group and a well-established one like Artspace to handle the development curve which is necessary. Artspace has had many years to develop its organisational and communication structures and work out how to manage studio space which houses artists with a range of interests and who come and go according to their career needs. A new group needs time to assemble the right mix of personalities and interests, to hone its vision, to assimilate the skills and contacts and, above all, to decide if it wants to think that big.

If it does wish to access lottery funds, with its requirements for formal constitution, an artist-led organisation has to move very quickly to sharing both leadership and vision with others who will have their own motives for getting involved. If such a collaboration becomes a meeting of minds, it is all to the good. But if it doesn’t, the danger is that an organisation is established which may not ultimately be in tune with the artists’ vision and which artists will subsequently reject. This raises the issue of the difference in speed between the way that arts managers and artist-led organisations operate and develop, with the underlying assumption, perhaps, that artists tend to act too slowly and need to be chivvied along to fit various deadlines and strategy plans.

Conversely though, the holistic approach which artists take means that decisions on one aspect of activity need to be set into the context of their practice as a whole, and all aspects of its impact carefully considered before major decisions are made. It may be in some cases that a group will decide to remain small and flexible, even if it means it loses opportunities for public funding. Within the case studies, for example, although Red Herring would like a permanent studio base, within the group there are mixed feelings about whether to pursue this in case their working practices and the ethos of the group are unduly influenced by the requirements of funding bodies.[1]

However, it could be argued that if artists want access to public funds, they simply have to get real and accept the conditions attached to them. Some comments within the case studies reflect such opinions. An alternative view however, is that it may be that a more vital and responsive arts infrastructure will be developed in the long-term if the value of artist-led organisations is more fully acknowledged, and a more flexible and sympathetic approach taken to enabling such groups to fulfil their artistic vision.

This may include reviewing the conditions under which funds can be made available, as well as the processes for monitoring and accounting for them. In addition, as the requirements for dealing with and accounting for National Lottery funds appear to be particularly complex to handle for smaller-scale organisations where staffing levels are deliberately kept low and much work is done voluntarily, it could also be argued that a more ‘user-friendly’ system needs to be evolved which recognises this.

This also raises the issue for the arts funding system as regards future investment in the work of artist-led organisations. The commitment of artists to achieving artistic vision has resulted in a considerable amount of valuable work being achieved on low resources. It could be argued therefore that directing additional resources to this area of work would help to avoid the ‘burn out’ in artists which is caused by an over reliance on voluntary work, and would represent a good return in terms of providing an on-going stimulus to the arts environment overall. An assessment of the level of funding which is required to enable artist-led organisations to sustain and develop their artistic practice and achieve their potential would therefore be timely.

However, making increased support conditional on creating permanent institutions may be counter-productive. Because artist-led organisations tend to grow up in response to a particular situation and are seeking to influence and make changes to that situation, it is reasonable to assume that will last only a short time, and the artists move on to work in new contexts. Such groups should not nevertheless be considered as failures, nor financial support be regarded as a waste of money by those who championed the groups. It may be, though, that it will be worth investing again in the key artists, not least because they have demonstrated they are capable of finding creative and original solutions to aspects arts delivery.

Although they are hard-pressed in terms of work-load, it would be beneficial for arts officers to look for ways of locating artists-led practice as a whole within their arts strategies, rather than dealing essentially with specific groups which they fund. This might be achieved by encouraging forums at which ideas and projects are discussed. By offering advice and suggesting useful contacts, groups would be provided with moral support for their work, even if cash grants were not always available.

The large new sums available to the arts through the National Lottery are set to have a huge impact on future arts provision overall in the country and this presents particular challenges for artist-led ventures. As the case studies show, this source is highly significant to artist-led studio and resource-based ventures which previously had access to few sources for capital development.[1] Undoubtedly, lottery awards have been invaluable to a group like Artspace Bristol which has been able to use the grant in conjunction with other funds already raised to progress a development strategy which has been honed over many years and which, so far, has remained broadly in tune with the needs of the artist-constituency. This group’s success will encourage other existing groups to follow suit. At the same time, the arts funding system has noted Artspace’s success and, recognising that studio provision plays a major part in the retention of artists in an area, is encouraging artists to form into groups and follow their example.

[1] The Foundation for Sport & the Arts has been a good supporter of artist-led ventures and between 1992 and 1996 awarded £662,705 for studio and resource development. In comparison, National Lottery funds through the Arts Council of England has already provided almost £2.4 million for similar activities.