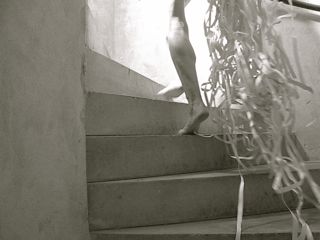 It is important not to ‘will’ slippage.

The building breaths differently today, just the end wall is still covered with a polythene skin. From behind it, fragments of speech, directions given in a low key, and a slow granular scraping, the occasional screech of the winch.

I have been loaned a projector. It is like picking up a musical instrument after a long time of not playing, for whatever reason.

I slip images across object, wall, floor, from pillar to post. Play, capture, dissolve, shift, miniaturise and stretch. I project another walk, a lambs heart, a bucket.. a dissolve of time and spaces, substance and solid, some illusion. ‘The order of remembering’ springs back into my mind.

I project a layer, a film of the polythene skin moving, fluid, onto a stone pillar, its opposite. It seems to dissolves the structure before inhabiting it, and becomes mesmerizing. I look around and see other polythene ‘skins’ hooked around the organ, a painting, the far wall. They hang like discarded clothes on the back of a chair. Some kind of dissaray. The beginning of an investigation into the push and pull of the interior of the space, of exploring its elasticity, its resonance perhaps.

My barefoot walking happens at the end on this day. Maybe a reverse step to propel new motion, and so I walk backwards in order to make a new move..

Nicole Zaaroura is an artist working with photography, sound, moving image and installation,  to explore through documented performative acts, notions of intimacy and distance, the meditative and discordant, in both public and private locations.  It is a practice  rooted in encounter, and an investigation into the brutal tenderness within journeys.