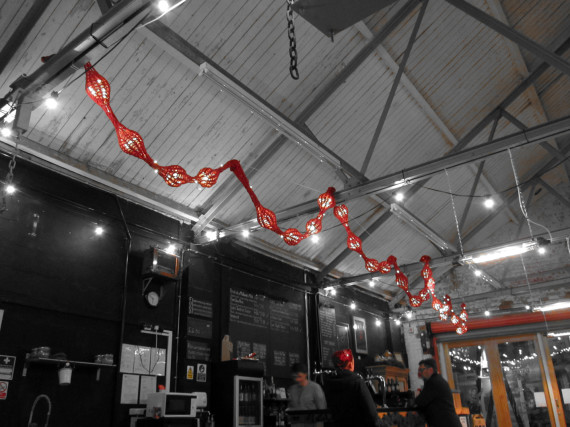 Sarah and I are very lucky to live in Coventry, a lot of culture happens here and at the beginning of October we were treated to the Festival of Imagineers and a visit from our very lovely friend Ceri. On Saturday 1st October the ran was coming down, a quick check on Twitter that the rain hadn’t out the performers off and the festival was still happening.

We headed down to University Square to see the first performance Urban Astronaut by Highly Sprung. This is a performance I seen glimpses of but never the first performance, it was great to see the full piece. The Urban Astronaut looks at what the world could be like in the future with serious air pollution problems. A female dancer explains through dance that the rich have left in rockets to other worlds and those who couldn’t afford it are left, some with more money have astronaut suits and others don’t. The female we are watching doesn’t wear a suit and is nurturing the earth, growing plants and collecting water, it feels she still loves the planet. Some time into the performance the Urban Astronaut arrives he is suit wearing along with his companions, his companions walk and they propeller him up and down on a travelling time machine. At first they destroy her world, pull her plants and home apart but she starts to show them that the world is okay and they don’t need suits and masks and slowly they begin to see. Eventually the Urban Astronaut is suit and mask free and dancing in formation with female. It is a beautiful performance with a powerful and easy to understand story. It was also interesting to see the performance taking place in heavy rain and how well the performers dealt with it. When Sarah and I are creating new outside work we should consider how it would work in the rain.

After the performance we headed into the Herbert Art Gallery & Museum who were celebrating the Festival of the Dead. The gallery was a hive of activity with Drink & Draw, street dance and crazy hairdressing from Osadia. Osadia was performance hairdressing, the two stylist didn’t appear to say anything and we’re dress fantastically in evening gowns, they did members of the publics hair in absolutely amazing styles. 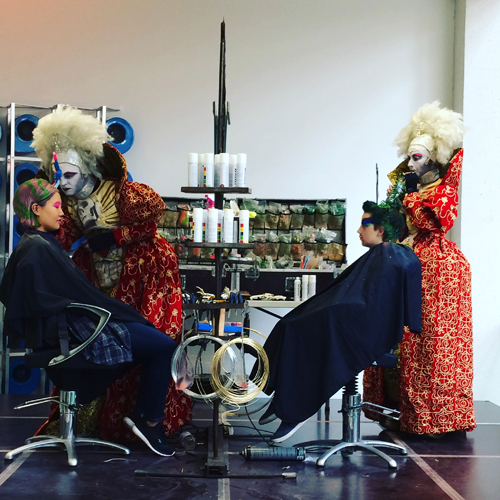 Back in University Square we watched Wheel House. Wheel House is a converted German Wheel, props have been added to create the feeling of a full home within the wheel. The performers go about their day to day lives living in the wheel. Through the performance you watch them work through the struggles of living within the wheel, the most moving was when the female character fell out while sleeping. I really enjoyed the performance, visually it was brilliant, watching the acrobatics taking place in and around the wheel was a lot of fun. 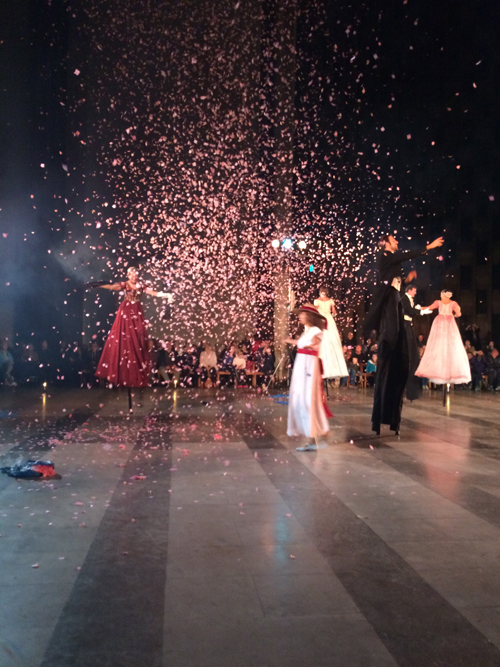 Orchestra of Samples by Addictive TV

The final performance of the festival was Orchestra of Samples by Addictive TV. This was a brilliant performance, while touring Addictive TV have recorded hundreds, thousands of musicians and filmed them playing. They have now mixed the recordings together, you have a few musicians playing together at once with all of their videos playing on a screen behind the mixing desk. This really changed the music the musicians where playing, you would get some very traditional music and modern together creating one sound. I loved the way this twist was created, taking individual musicians and then creating a whole new product from them. Perhaps this is something for Sarah and I to think about.