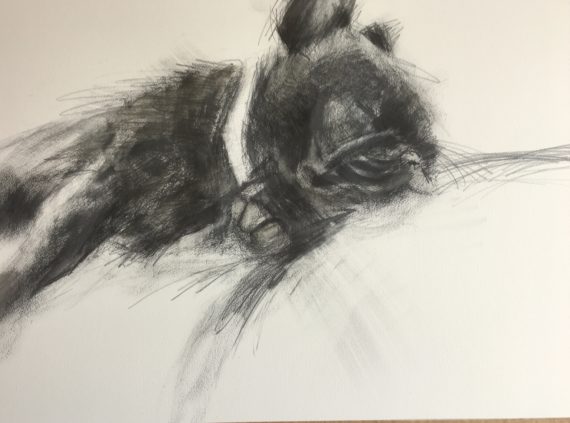 When I began this residency, I promised myself I would not overthink. I would not attempt to resolve conceptual concerns. I would remain open to possibility in everything I did. And I would only do what I wanted to do, not what I felt I ought to do. But in the first couple of days of feeling vulnerable, consumed by unhelpful vague fears of public humiliation and failure, it was easy to forget those promises, and to forget why I was here doing something I really wanted to do. I had to keep reminding myself: this is supposed to be fun! Fun without responsibility for producing any resolved work.

And I got there. It became great fun, playing without purpose, indulging in anything I fancied making. If I became fed up with a particular direction, if an experiment just didn’t resonate, I felt no stress about having to resolve the idea. I just moved on. In this way, it’s possible to generate a lot of work over five weeks.

I’d decided halfway through that I would present the work in an ongoing working studio setup. No editing, no re-presenting, no unmasking of edges. Discarded ideas propped up around the walls, the work table covered in jars of paint, medium and solvent, still full following my conversion to Dulux midway through. The larger pieces are framed not just by masking tape but by little watercolour and graphite studies and experiments.

I look around and realise everything has been generated out of my head in just five weeks. It’s gone from nothing, not existing, to a theatrically exuberant takeover of this vast space. Baroque forms in free fall, an ambition realised to paint forms entirely from memory, abstracted figuration pushed to the limits.

It’s another stepping stone on a continuing journey with blind corners every half mile. What a privilege.