Creative Blind Dates: Speaking from a personal perspective,  that’s the easiest way to describe phase two of the Art Builders.

The More official description might be each school which took part in the Big Build at Dreamland in Margate is now paired with two Animate artists to create a new installation on a subject and in a venue of the school’s choice. The ‘Art Leaders’ are the 25 children from each school who participated in the Big Build at Dreamland are now leading their own schools project. We are in the Easter Holidays so when they return, we will be looking to start hearing what the ideas each school has for their own Big Build, and the suggestions for where to build it?

The blind date bit is the pairing of artists together for delivery.

I will be working with Lucy Stockton-Smith with Ellington Infant School in Ramsgate and Esther Coombes with Hoath Primary School which is very rural in the Canterbury district.

A creative journey to unfold as I have never worked with either of these artists before so new friends and working relationships ahead. I have met both of them one or twice now in recent team building scenarios organised by Animate Arts. The last meeting, we were reminded of the Ted Talk given by Sir Ken Robison in 2006. This entertaining talk highlights that the current education system doesn’t enable creativity but somehow rather sadly manages to teach creativity out of children! I remember when this video came out in 2006 it was championed by many organisations I was working with.

See the link below to a youtube video of his address at a TED conference.

Thirteen years later I can’t see that his advice has been used much, if at all. His observations are just as relevant, if not more so now. So inspired by this video Animate Artists create a series of banners and placard’s advocating for more creativity in schools.

So the big build was just over a week ago now, over two days eight schools in Kent travelled to Dreamland in Margate for The Big Build.

What was The Big Build? A lunar landscape complete with a moon buggy and rocket control console all made from cardboard. All the artists involved had made cardboard space helmets ready for the event and wore their space suits during the build.

My main responsibility was really to ensure the moon buggy was structurally sound as it would need to be picked up and moved across the newspaper lunar landscape in a stop motion animation process. I created a chassis from carpet tubes and axles which were pinned together with sticks of rolled up newspaper. These rolled tightly in a new mangle type machine to make sturdy rods, (very useful for the construction of ambitious creations at a later stage).

Things went well enough on creating the framework, I had children pushing rods through holes folding the ends over and taping things down.  Time was very short and I was under pressure. When things were complete I looked across to see if my instructions to the school had been carried out? I was very relieved to see one wheel completed with two almost finished and a forth with a lot to do. This wouldn’t take long and they slipped onto the axels like a smooth formula one tyre change. Other schools were tasked with all the rest of the lunar buggy details and it soon took shape. 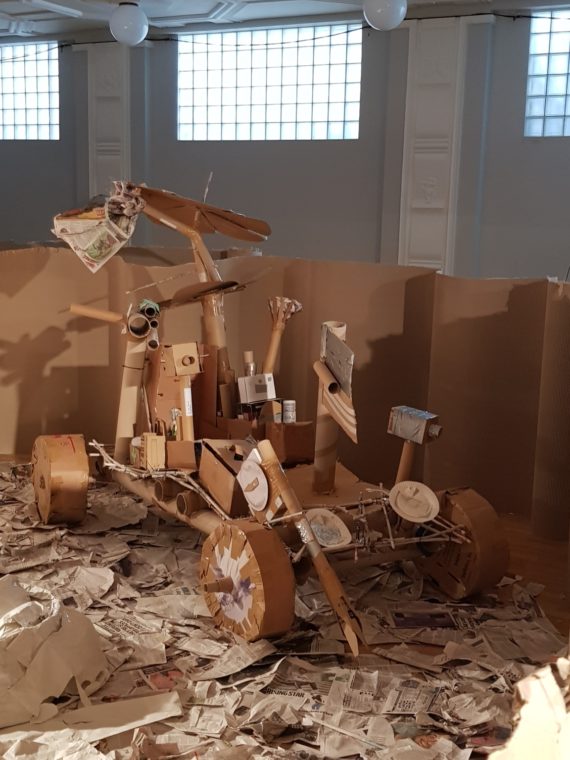 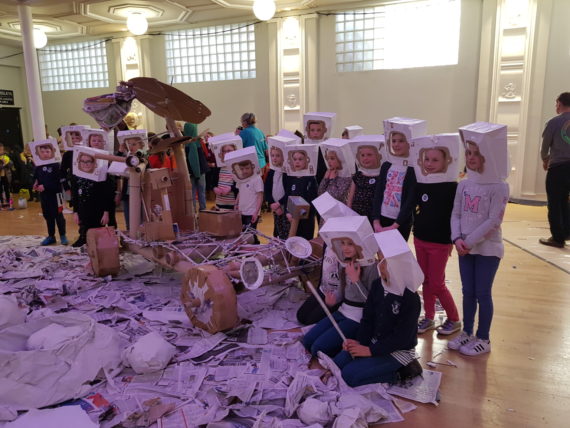 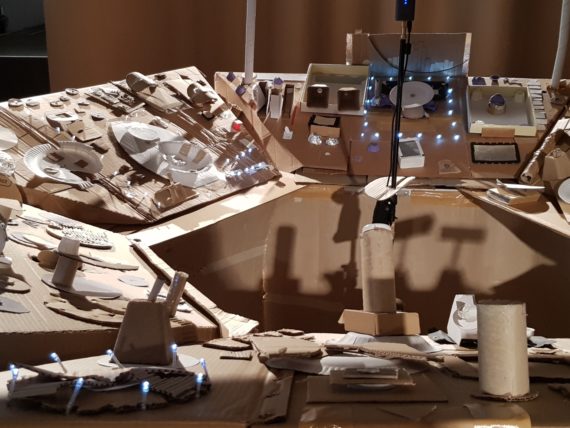 The whole thing looked amazing as never at any point till the end when it was all assembled did anyone know what things would look like.  The whole thing filmed in 360 degree VR remember and when Tim has edited the video I will post the link. For here is the taster again, move the mouse across the screen for the full 360 effect.

Here is a little story about the most powerful memory of the whole build for me: While I was manning the ‘tool station’ this was where glue guns, sharp knives, saws and drills were used. Pupils came up to the tool station for more complex construction problems and us astronauts would fix it and pupils go back with the completed parts. Now it was like working in a pub on a very busy Friday night with clients 2-3 deep at the bar trying to get served, with quick exchanges/instructions taking place, followed by rapid making, cutting, gluing and sticking while you wait style. This is the moment that will probably always stay with me as a reminder of what art is and what working with other people is like!

A small quite boy waited patiently I could see him standing quietly  and thought it will take him along time to get served as he was not good at navigating the mele. I beckoned him over to me. He gave me an L shaped piece of very strong cardboard. This had likely been used to protect the edges of a flat screen TV while in transit. On it was drawn a small circle, I asked if he needed it cut out? ‘Yes Please’. I looked at the task and thought there is no way I am going to attempt this with a craft or Stanley knife the card is just too strong and it would take quite a while and have a low quality outcome. So I remembered I had brought with me a set of hole saws. I chose the smallest one 19mm. It was a perfect fit and I hadn’t used them yet and felt glad I had brought them now. I drilled a perfect sharp hole into the L shape card thinking I wonder what he can be making with this relatively complex part. I gave it back to him and he took it looking at me turned around and walked away. I was already on the next task. A minute or two later I saw the boy back in the que and beckoned him over as I thought he needed help and couldn’t get going on something and time was passing quickly. He gave me back the piece of card saying ‘ I wanted the other bit’! 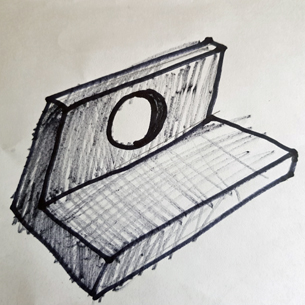 Preparation Day for The Big Build had many highlights and generally felt like having fun with friends. Started with loading up a van, fit to burst with cardboard as well as making new friends on the Animate Team. With the serious preparation for 8 primary schools arriving over the next two days all completed and ready. The underlaying vibe was let’s test out our costumes and see who looks the funniest? We posed for a NASA style group photo. 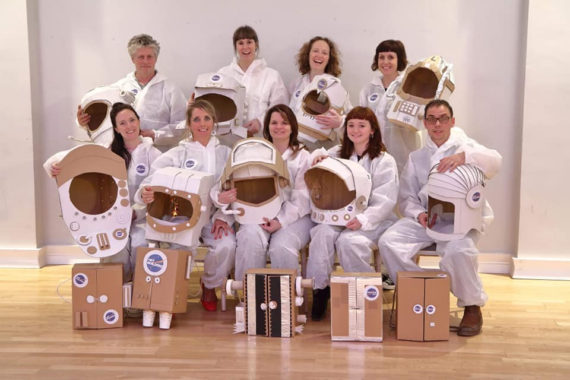 We went walkabout, this must have turned a few heads!

I have to mention that a really important part of this project is the documentation. This is pioneered by Timothy Leek using 360 virtual reality photography. The preparation day enabled a little experimentation with the equipment before the event and a few fun trail runs. The funniest was a small animated film (click on the link), titled Space Dance Timothy Leek where we all practiced our space walking. The youtube video is worth watching. If you watch on a phone you can move your finger across the screen and the 360 vision follows your movements. If your watching on a computer then the mouse movement will dictate the video view. Try it, it really works and is very amusing. 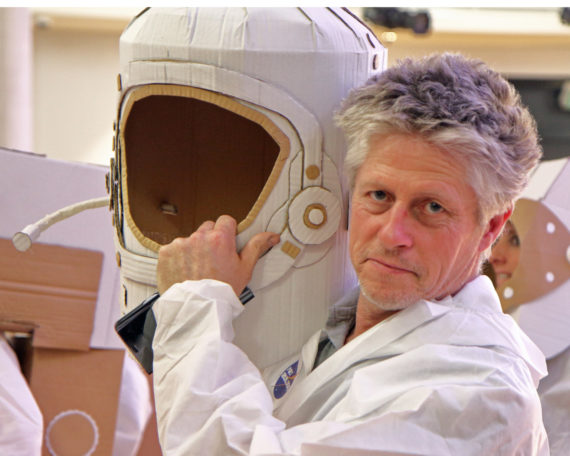 We did find time to prepare some of the build ready to save time as actual build time on the day was short. My main task will be to construct a lunar moon buggy. I did manage to construct the axels and find the right size cardboard tubes for the chassis. 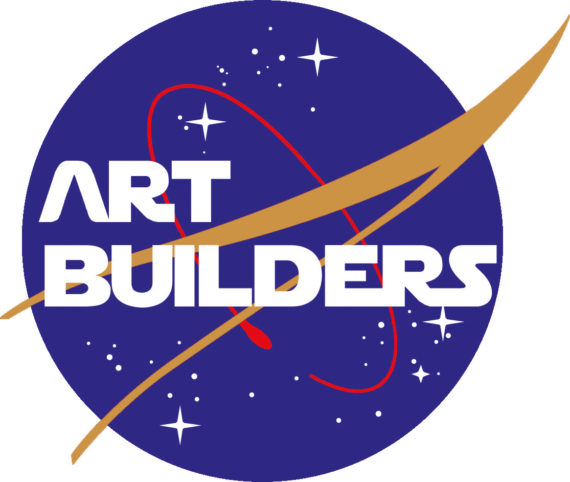