I entered my studio today and find an unfamiliar smell, which i discover comes from a baby beaker full of off milk. I vaguely recall bringing it in last week. It’s been another week of illness with Abie up most of most nights with a temperature and fluey symptoms. In this state its a toss up between what gets done and what gets left undone, so housekeeping takes a bit of a back seat both at home and in the studio.

A week after I wrote that sentence I am back in the studio, after being struck down with the bug Abie had. And then he got a vomiting and diarrhoea bug. So a lot of laundry and not a lot of sleep. Plus we are moving house next week, so there are boxes everywhere.

Coming to the studio feels like a space to breathe. I’ve been reading about the installation artist Ann Hamilton’s work, trying to trace the evolution of a practice. Today someone knocked on my studio door to borrow my key and we ended up having a conversation about how to define your practice. She had also worked with installation but had found it difficult to find the right opportunities so was turning to working with groups and on public art projects. We talked about how to tread a line between defining yourself too specifically as an artist and thereby missing out on opportunities, but also the need to have a recognisable practice. Working thematically is one way of negotiating this but its often hard to link everything together until after a piece of work has appeared. I don’t feel like being a mother defines my practice, but it has brought new aspects to both the way I make work and the ideas I’m interested in, not least feminism.

I’ve finally got an exhibition date for the piece I’ve been working on since last year, its going to show in April at St Thomas’s Church in Hanwell, the place we met the group and which was designed by Edward Maufe, whose wife Prudence Maufe worked for Heals and through her contacts brought in many well known artists and designers of the time to contribute to the church, so it feels like quite an honour to show the work there. I found a fascinating article she wrote for the spectator in April 1923 entitled ‘Married Women and Work’. Here is a brief extract:

“should she wish to start independently the greatest difficulty is to find a position in which she can organize her own time. As an employee she will find this almost insuperable, for in nearly all professions open to women there are certain fixed hours which have to be observed, and experience teaches that if these hours are really hard and fast, a married woman with children cannot fulfil her obligation in the treble life she is undertaking. But directly she herself becomes an employer, or can afford an assistant, she can undertake many responsibilities which would otherwise be impossible. Every married woman knows of the many serious and absolutely imperative occasions when her obvious duty is at home—in cases of sickness, &c.—so that if she is bound by some eight hour contract she cannot conscientiously do her job at home, but if she is allowed to arrange her own time, by organizing her work in advance, and doing much overtime herself, these emergencies can be met.”

Prudence goes on to explain how she developed her own freelance career as an interior designer while juggling childcare, household and getting paid help when she could. Its pretty amazing to think that almost 100 years later, some things have not really changed that much. 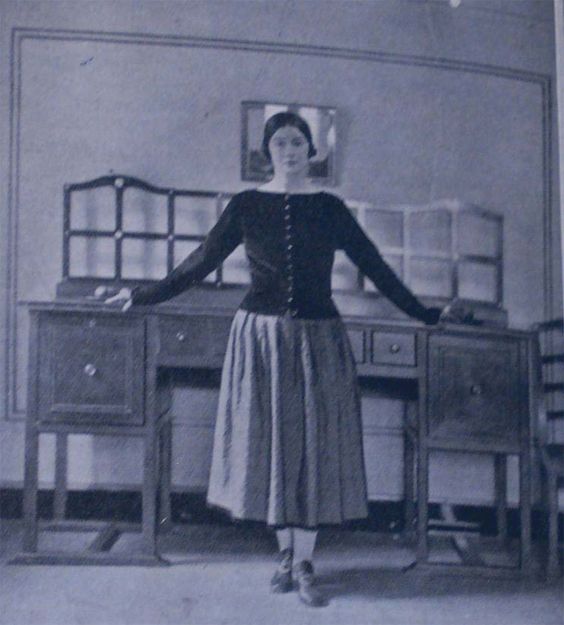 Katy Beinart is an interdisciplinary artist who examines themes of history, identity and place. Her work is research based and site-specific, and often evolves through a participatory process. She trained as an architect and is interested in readings of both built and natural environments.