I’m currently making work about the plight of refugees stuck in Northern France, articulating my concern for those ‘living’ in dreadful conditions from a child’s perspective.

I have made a child’s coat in paper form which attempts to express the vulnerability of children caught up in the crisis. I’m developing the idea of the coat, trying to transom this familiar garment into a tent-like object so that the viewer sees coat and tent almost simultaneously.

I figure that I only need a few universally recognisable tent-like features to make this work  but trying to realise this idea has been difficult and I came to a standstill in the studio today. I decided to come back home and do some research into tent design.

Remember that I  have been constructing garments from pattern pieces so I’m thinking in terms of a series of paper shapes to try and create  particular 3D form. So I googled ‘tents’ and picked up a few suitable designs which I sketched, and got side-tracked by the most amazing designs and images of glamping.

I wasn’t quite seeing the shape I had in mind so googled images under ‘Dunkirk Refugee Camp’. I realise its awful there as I have been following the situation and have seen media photographs and documentaries but looking at these images, after I’d been working in a objective problem-solving way towards my work, I was hopelessly saddened. God its grim, really grim. I’m not a political person but I feel utterly dismayed by the callous way the inhabitants of the camp are being treated. Their conditions are inhuman and the authorities are by consequence inhumane.

I could hardly continue to scroll down through the images. But I have done, and have sketched the sagging layers of canvas over domed frames. I have been camping for many years and have often sat in the tent on chilly evenings during the summer holidays surrounded  by damp clothes and wishing I was at home! Camping is not great even for holiday makers so how it must be for these refugees in freezing and muddy conditions  I just dont know – it looks horrendous. And there are children ‘living’ there…. 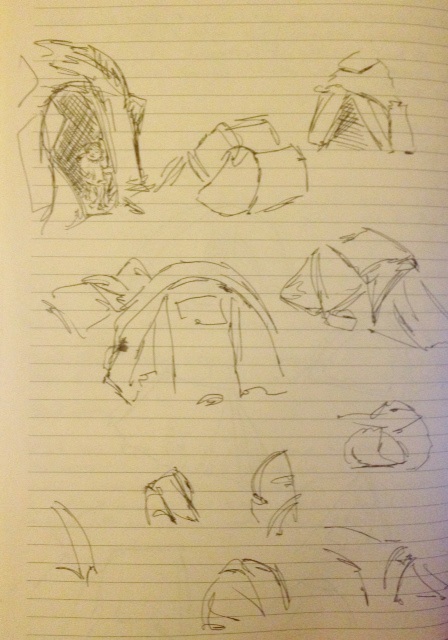 My sketches begin to capture the impossibility of the situation and I’m beginning to see the direction my work needs to take, how I can use the layers of paper to suggest the sagging canvas, the broken tents.

I don’t know however if I have the stomach to do it without wanting to cry and cry – I feel so sick about it all. I think I will need another day, a stronger frame of mind to get on with this one.

I’m following Help Refugees on FaceBook for straight talking informative updates and photographs (mostly on the situation in Calais).