I’m not good at this type of project record; my writing up until now seems to oscillate between formal reporting structures (public, but a given quantity, and easy to de-personalise) and informal email chatting (private, wide-ranging and meandering, open-ended…). Blogging an award seems to sit somewhere between these two poles, and has lead to my making copious notes, but not posting them. In an attempt to stop over-thinking things, my plan now is to

“Begin at the beginning,”…”and go on till you come to the end: then stop.”

So, how did I (we) get here? The award itself is for a collaborative action research approach with fellow artist Ruth Jones, to develop the “Agency of Visible Women” an Intersectional Womxn Artist Network based in Southend-on-Sea that itself developed from a group exhibition that Ruth curated, bringing many women artists together. 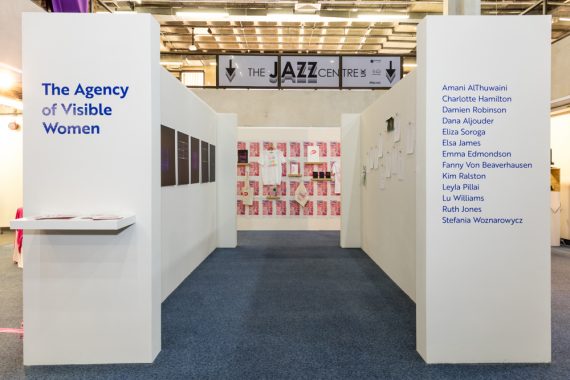 And we kept talking…and thought about what else we’d like to do…and applied. Our aim has been to develop the Agency beyond its initial stages through research including visits to other community-based groups, hosting consultations with women artists, and publishing our findings in a collaborative artist publication, developed using risograph, which we would learn as part of the project,  detailed in the next entry. 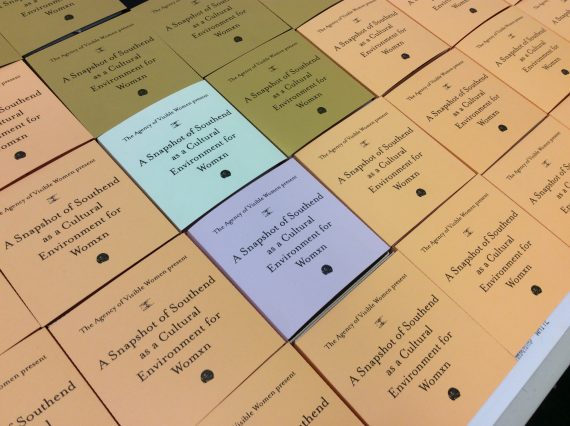 We’ve now reached the point where the project is complete; we have learned risograph skills, consulted with women artists, held workshops, gathered feedback and created a publication…but over the course of the project we experienced some shifting and expansion which means a less than exact finishing line.

While the publication is completed, we’ve been fortunate to continue developing the partnership with TOW. This lead to them offering us an ISBN number, which gives the publication an added level of credibility to others. We’re also discussing a formal launch event with TOW which – due to elections, festive seasons, and TOW being closed until late January – will take place after the formal ending of the project. We also (I told you we had been busy…) have a digital version of the publication, which will most likely be available via the TOW website in line with the launch.

We didn’t originally plan to push the publication this far, but the open structure of the bursary, and particularly being given the funds up front, meant we have been able to encompass ways of working that would in other circumstances constitute risk, or at the very least leave us out of pocket. This in turn gives us a level of visibility that is a great boost to the project as a whole, which would not have been possible without AN and TOW. Although the final report goes in to AN shortly, I hope to add a blog post detailing the launch. And if you’ve stuck with me, thank you for reading this far – but you really should read what our artist groups said as soon as we can make it available!

The pandemic prevented a physical publication launch but with its increased resonance to the current creative environment we have released the digital version free, and in a range of more accessible formats. The limited edition publication is available to buy (if you know anyone with any money!).

Covid-19 collides with pre-existing inequalities so that different groups of women will be disproportionately impacted. The majority of artists and creatives were already living precariously with insecure income and low pay; the pandemic has increased this precarity. In an AN survey, 93% of respondents said that they, their practice or career had been affected by the pandemic, with 60% expecting a 50% reduction in income. Therefore womxn creatives are likely to be doubly affected.

Creating a publication from the collaborative research stage wasn’t a linear progression: we’d been thinking about format for a while and wanted to reflect the wider non-linear approach we’d taken. So we had a concept before the workshops, but only followed this up when we had the research findings.

In many ways it’s a simple concept; both of us having worked in different capacities in the arts, we both felt that traditionally formatted reports don’t seem to reach the people they are discussing. If you’re short of time due to family or carer responsibilities, or – like most artists – have a second job or have to work stupidly long hours to support your practice (or if you have the jackpot of both…) then long wordy documents don’t meet your needs. We needed a more accessible version that didn’t presume to have a magic answer for everything.

Ruth posited a format based on Tarot cards; that each card would present a single statement/comment/idea/reflection and so the order could be laid out and changed by every individual. Working through the comments we realised that we’d need double-sided cards, and that there would be a lot of them. I began trying out some container formats and came up with a matchbox style prototype (box that slides out of a sleeve). We spent a long time – a loooong time – formatting the image and text files for the cards, the  inner sheet, the sleeve, and the box, but finally were confident this was ready to roll. More long evenings lead to double-sided A3 riso sheets that in turn required cutting and trimming. Once again we divided the workload, with Ruth working on the cards while I cut the sleeves and boxes.

And now we are nearly there…. 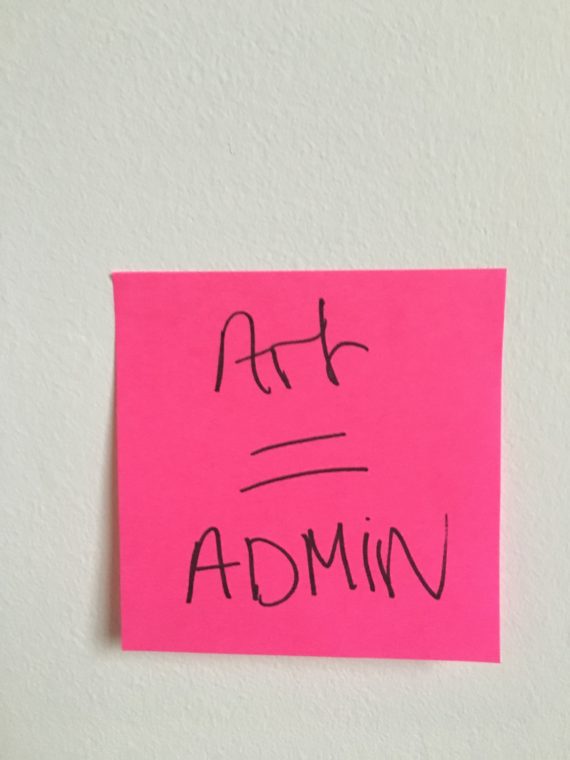 A key aim for the bursary supported work was to host two intersectional creative surgery consultations with Southend women artists to review what the Agency of Visible Women could provide for women who often feel excluded from the artist community. The findings would in turn be translated into a collaborative publication.  While developing our riso skills, we discussed our approach for this in a lot of detail, wanting to ensure that these events didn’t turn into a way of exploiting women’s knowledge and experience. Having both been to numerous ‘consultations’ where everyone gets paid except the artists, we wanted to find a new structure that wouldn’t follow this route.

The format that we both were drawn to was the the rather sneered at “coffee morning”, which would provide an informal framework to allow women to mix and discuss ideas while also experiencing some small aspects of self-care and time to themselves. We drew on the Agency experience of hosting reading groups, including one group I lead for women with disabilities, to inform our thinking about timing, location and access. Our experience has been that many women with disabilities have hidden impairments that require a different access approach, particularly for anyone who currently doesn’t self-identify as disabled. We looked at the best way to use the access element of our budget, deciding to employ a local young artist we both knew to support and help facilitate the sessions – and yes, we paid her, so a double win on access and artist pay. We also ensured plenty of cake – we know plenty of situations where artist workers make sure everyone else is looked after, but they never are; a slice of cake can’t make up for that, but it’s a starting point.

We had a great turn out at the sessions, and got lots of positive feedback, and fantastic contributions; what struck me was how many of us are experiencing very similar obstacles, and yet we’ve been conditioned to think these are linked to individual ‘failings’ rather than systemic art sector issues; we’re not working hard enough, not talented enough, not ‘whatever’ enough. So similar to the language used around all other areas of women’s lives which exhausts us and keeps us passive. And definitely something we want to communicate.

We’ve had some fortuitous timing with this project, most notably that our decision to work with risograph aligned with The Old Waterworks expansion of their printmaking facilities to include – a risograph! Although I’m no longer a studio holder there, I’ve maintained contact with the organisation as well as links to many of the fantastic artists based there (Ruth being one). TOW, as an artist-led space, have an innate understanding that artist’s lives and practice don’t operate in a straight “career progression” line, and their work developing events and facilities available to artists – at all stages of their career – is part of making this a community space as well as as a creative facility.

Anyway, back to the risograph…

TOW’s risograph acquistion was accelerated after the Rabbit’s Road induction, so it was only a month later that Ruth and I were able to begin our first tentative steps into independent working. I have a background as a printmaker and a printer, and while I’ve deviated into the digital world, it’s a medium that calls me back. To start the ball rolling I created a digital image based on a page from Vincent Steer’s 1934 “Printing Design and Layout”. I know how nerdy that sounds, but as all the typeface examples in black are ornamented in an orange-red, it seemed a perfect choice to work with to match TOW’s risograph colours of orange and black. This was merged with a found advertising layout image showing a woman on one side and a fragment of  a Charles Atlas ad on the reverse, which I scanned and merged digitally. 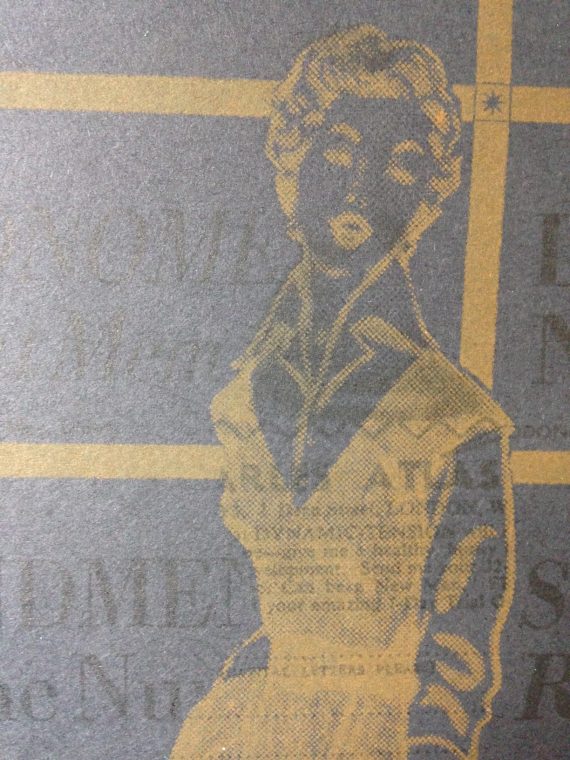 The images were separated out into layers for the two colours, each in black for making the riso master. Working this way allowed me to think about the relationship between digital techniques and the new riso skills I needed to develop.

Ruth and I experimented printing with a wide range of papers in terms of colour, texture and weight to better understand what works best; the mix of block colour, text and halftone in the image helped us think through the different riso settings to get the best outcomes. We’ve saved these prints as a form of database to refer back to through the project, but posted the images on social media, getting some great responses, particularly about the necessity of an “Excursion Waste Basket”.

Collaborative learning and development certainly reflects back to my own practice and experience. As a d/Deaf artist I’m usually excluded from networking and development opportunities – unless I expend considerable time and effort negotiating access (with no guarantee of success) for opportunities that many artists take for granted. One of the reasons I was so drawn to the Agency was my sister artists’ willingness to consider how to include me, and this in turn feeds my innate attraction to collaborative and community approaches. The sharing of experience and knowledge is also developing my understanding of intersectional issues; not only broadening my knowledge of issues that impact on other people, but also developing a deeper understanding of how I am personally impacted. I’ll add thoughts and examples of this through my blog posts.

The first example is related to blogging (and a partial explanation of why I have copious notes but am back-filling in terms of actual posts). At the start of the project I spent some time looking at the a-n blog structure, as well as my website provider’s blog mechanism, but neither really seemed to meet what I wanted in terms of reflecting the shared working process with Ruth. We set this aside for a while, and then began discussing virtual information sharing (with the intention that this would then feed into our individual blogs). I was keen for some kind of virtual noticeboard that would allow us to share information as and when we wanted to without the persistent pestering that email dialogues can become. Ruth’s discussions with another agency member threw up Miro, an online colloboration programme, that would allow us to do just that.

We both feel that using this noticeboard approach mitigates the fractured nature of our working/personal lives (would be nice to have focused time to…well, focus…but few people do). It’s certainly something I’ll keep working with after the project is completed.