The research trip allowed me to reconnect with NY based artist Lizzy De Vita. I met Lizzy during a residency/masterclass in Warsaw called Creating through Collaboration. Space. Body. Camera. led by Grzegorz Kowalski at CCA Ujadowski. This workshop opened us up to each others practices and mutual interests in performing in Visual Arts. I was invited by Lizzy to take part in a performance evening curated by Chiarina Chen called To Stage at 67 Ludlow  .

Working in relation to Lizzys performance, I worked out a series of performance sketches that may riff and jar with Lizzys performance. Our work is very different in aesthetics but the core interest is the body. The performance I presented began with a developing score called Finding Base then led to a performance reading of Letter to Hotbird3 (script) . After the text is read the script is then soaked in water and thrown upwards. I decided to work with the image of continuing a gaze between myself and the mushed up script, with this I began to push the image of myself to deterirate/degrade; like a fading photograph, as each muscle pushes the bodies structure to tension the body slowly decays downwards to the ground until the connection is gone and I am unable to see the letter. This slow movement is something I have been working with in the durational performance A boy stands in for a rock and vice versa first performed at Collactive Gallery.

I was very happy with the performance that challenged me to work instinctively and fast, working with how the audience were situated and what other factors were occuring, a live stream of an electronic music producer was playing throughout the performance.

Movement Research is an organisation based in New York, they run workshops, classes and Laboratories on Movement and Dance as well as residencys and performance opportunities. The development of M.R. was closely linked to the development of the Judson dance Theatre and the performances that went on there. M.R. currently organise the performance evenings at the Judson Church. I visited two of the free monday performances which present works in progress by a range of emerging dance artists.

Each week I took part in KJ Holmes M.R. class a Gibney Dance called Body Mind Image. As a somatic practice the classes were aimed at personal physical inquiries around your bodies structure.

These classes were great and the returning to each one aided my understanding for different forms of using the body as a research tool. Each session focused on a single body part; The foot, The spine, The sacrum and the head. Using the Body Mind centering principle of Isolate to integrate, we worked as a group and individually to explore the possibilities and consequences of moving the specific body parts. Through explorations to then diagram studies K.J. emphasised how this explores research on macro and micro levels, the movement studies allow us to come at the anatomy with experience to contrast with and after a fuller image of these body parts and what they do.  Below are some images taken from scoring my experiences of working with each part and the anatomical studies.

I was excited to visit the Kitchen in New York, as its place in Art history as a venue that pushes multimedia and avant garde practices, So many performance artists and dancers from New Yorks past have presented work there including, Vito Acconci, Charles Atlas, Lucinda Childs, and many more.

The first visit to the Kitchen was for a performance by Ieva Miseviciutè called Tongue PHD, using the format/structure of a PHD paper and presentation as the starting point Miseviciutè proceeded to present a performance lecture using sculptures/props, text and movement to explore the tongues relationship to perception, being and functionality.

The stage is a tongue. Ieva is a tongue. There is a clothes rail with sort of tongues. As you sit down there is a print-out the programme notes/ Phd cover and contents page. Then you look at the print out again and the sizing is irregular, elongated…tongue-like. When the performance began the opening scenes were reminiscent of the dancing sequences of the Black Lodge in Twin Peaks, fading in and out to find Ieva in a different position and movement – this became a signature transition between sections of the performance – then the lecture/Phd began, then dissipated into strange scenes of movement and text using the Tongue as an analogous form, as much as it is a flexible malleable organ also. After the opening scene, Ieva pointed to the Phd contents page and explained how the page could be referred to throughout and you may see the topics presented in order, at different times or all at once! The following performance shifted through different ways of being and thinking about the tongue in relation to our own experience of the world. Ieva merged herself into sculptures and extended herself through this into a more empathetic study of ‘tongue-ness’ giving more weight to a muscles abilities and its evolution/history presented the a body part as more than its base use. Looking back on the performance I can relate this form of research as performance to something akin to the movement practice of ‘Mind, Body, Centering’ and one of the principles; Isolate to integrate. I really loved this performance, It fused a large mix of approaches and each complimented the other seamlessly, the balance of theory to practice was excellent and never felt the performance becoming a dry lecture this is owed to her humour and performance quality, Staging, music and lighting were never simple but worked incredibly. 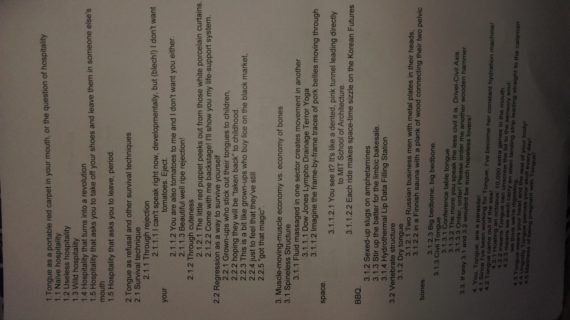 For a trailer of the performance here >>>

Sketching and notating some of Simone Fortis improvisations and performances including Huddle.

I was beginning to lok at notating details important for me, and how this can be done live, Some aspects lack a sense without the live work but this dissonance is interesting and something I could maybe play with, within my own work.

The first 2 images relate to Huddle and the other images are notations of pathways and postures of an ‘Animation’ or improvisation demo by Forti. Essentially the score consists of;

1 – choose an object. (she chose a Water cooler tank)

4 – choose 3/4 images from text, to work with in an improvisation of movement and words.

This one was great, and hard to detail the changes that happen, looking at Fortis “dance constructions’ you understand why Forti would have chose an incredibly large water tank; its an object as heavy and ‘body-like’. I find it really fascinating in Fortis work how she can find a sense of equilibrium between using and performing objects.

The Jerome Robbins Dance Archive is housed at the New York Public Library for the performing arts. Part of the Lincoln Center for Performing Arts including the NYC Ballet theatre and Opera house.

The dance archive is the largest archive in the world devoted to dance. Its span and range is overwhelming and after 5 minutes of being in there I realised I would be returning here many times during my visit (5 in total)

My focus on exploring the archive was mainly in the post-modern dance scene of NYC of the mid sixties; looking at Yvonne Rainer, Simone Forti and Trisha Brown along with others that moved around the Judson Memorial Church scene.

A secondary and very basic task for myself was also finding a sequence from Merce Cunningham (his archive was gifted to the JRDA after passing). Having read a description of a sequence where Merce interpreted/performed a version of Duchamps painting Nude descending staircase no. 2 I was excited and determined to find this sequence. My reason for hunting this down was from having finished an exhibition at Collective Gallery in Edinburgh, I used this painting to develop a site-responsive performance as part of my installation (more info) .

The archive is very strict on what can and cannot be archived, all film work is viewed only on campus, even if the work has been digitized. The second photograph is as much as you can see within the digital media section of the archive.

This presented a problem for me already about how can I document this trip and the experiences i have with the work I have researched in the archive. However, this is part of the problem performance has inherently, and maybe this can become part fo the research also. At first I was reluctant about the very tight limits around how one requests to view a specific work; waiting for the request to be filled, watching on a square CRT monitor, in a cold room (FYI no large jumpers in the archive!) is not the ideal situation to experience a piece of dance. However that was it! it a was a reminder of ‘this is not the work, this is a mediated form of it’ sometime a 3/4x removed mediation if the work has gone through two digital processes (>vhs>dvd) the distortion alone reminds you of this ( some did look great with the degrading of interlaced video). This problem brought into ways I may explore documenting performance and look at ideas of notation.

I then had 2 challenges; Find the Merce sequence, find ways of remembering and holding onto watched dances. The following posts will expand and discuss these challenges and problems.

The first visit, there was no prevail of the footage of Merce Cunningham. Although I had found out which performance the sequence came from; Walkaround Time,  Jasper Johns used many of Duchamps works in the set including Bride Stripped bare by her Bachelors, Even. These were printed on large inflatable plastic cubes to be performed around and behind.  The archive held multiple performances and rehearsals of the company, The first footage I requested was of two sequences in rehearsal and another performance in rehearsal.

Discrepancies are abundant in recalling some of these details.

In rehearsal at the Joyce Theatre the company performed around a styled ballet barre, one body traverses the width of the the stage toward the upside down trapeze like barre. Stepping behind themselves, a deep lunge begins the crossing, a series of exchanges in footing between three or four positions the female move between crossing and uncrossing her legs, lunging/stretching to lifting/pulling. As they reached the bar, a male has been making their way across. As they meet the male begins to lean onto the others side. The phrase continues with a descent and we end with the two bodies lying on their sides on atop the other.

This seemed to be very different to the work however funnily enough some of the shapes/positions were similar to structures made by Philip in our performance. Through looking through a lot of work by Merce, I continued to find very interesting images working groups of bodies into lumps, object-like forms. For work that I felt had a very strong aesthetic, I really like how images such as the colour one below drew stark contrasts using these honed/trained bodies.

Trained as a Visual Artist however my practice has strong in uences from my background as a Dancer (Breakdancer). Incorporating Hip-Hops methodologies of sampling and use of gestural image making. Using a range of sourced material from Film, TV and Literature Working in Visual Arts and Dance contexts my work is focused on the body as a site for analysis and reflection exploring its ease in shifting between subjectivity and objectivity. www.markrbleakley.com