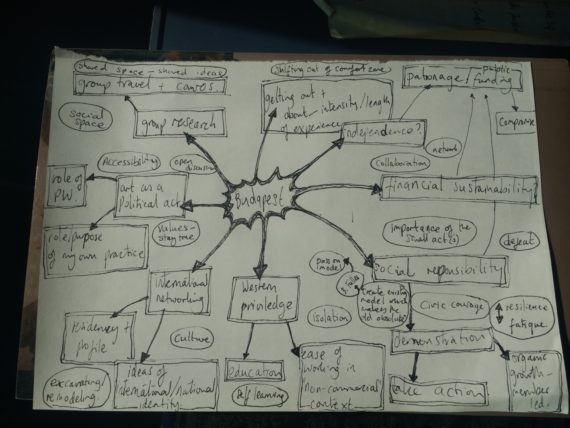 First stop from the train was a trip out of town to Art Quarter Budapest (AQB). This trip was a direct follow on from the Transylvanian Hungarian Exchange: re-appraising folk and the contemporary talk held at Castlefield Gallery in 2017, which had in part inspired my interest in the Budapest delegation as an artist and fervent fan of the city’s Neprajzi Muzeum. In actuality, the delegation gives me much more to think about in terms of my role at Paradise Works and I’ve parked the folk art interest until later this year.

The huge complex inhabited by AQB was owned and partly funded by one man for the specific purpose of housing artists and art spaces. Philanthropy was cited but it was difficult to gauge the full details of how this came about and worked in practice. There didn’t appear to be any signs that the owner was waiting to cash in on a nest egg once the city caught up to the former brewery’s site on the edge of the city. Studio holders receive subsidised rent and income is bolstered by a number of small businesses – inc. a chocolatier, nail bar and gardening supplier – who pay full fat rent. AQB’s residency programme is self funded but was seen as an opportunity to bring international funds to cover the opportunity rather than a self-funded ‘art holiday’.


This idea of artists in residence bringing in their own funding was shared by Budapest Art Factory, an artist led space run by Márta Kucsora, Dóra Juhász and Sándor Szász, similarly on the edge of the city in a huge former factory building.Art Factory are completely independent and operate outside of any state or arts funding. They are supported by the building’s owner who has enabled them to be in their current premises for the last 15 years and whilst the current site is due for development, this relationship has ensured that the landlord is helping the group rehome in another building from their portfolio.

BAF highlighted the importance of building and maintaining relationships with stakeholders in the city, and were clear about their commitment to maintaining financial independence. The political landscape in Hungary means that most artist-led spaces we spoke to will not engage with, or accept any state funding. BAF talked of swapping paintings with collectors in return for residency accommodation, or selling work to generate income. Given the reliance on Arts Council funding within contemporary arts in the UK I couldn’t help but think that we are not developing important skills in negotiation, and that an un-funded approach necessitates engaging and developing an audience for our work in a different way. Of course, the idea of independence in either camp is compromised in some capacity – art collectors will be more interested in acquiring paintings than say, riskier, less commercial works such as film or performance – but I’m interested in what conversations need to be had and with whom to help develop more financial sustainability beyond short-term project grants. This interest is of course based on the assumption that the arts need to be subsidised in some way, but who to foot the bill?