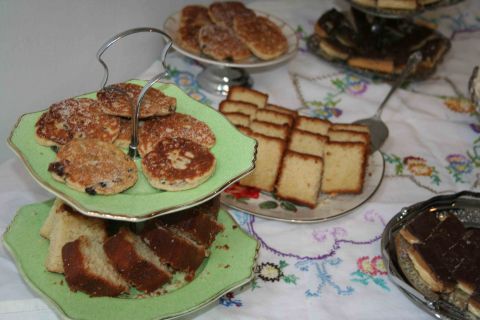 I wake up and it’s Tuesday already. Where did the time go? Must I go back to reality? Can’t I stay in the Cerbyd bubble forever? I idly prepare breakfast and warm drinks as Cerbyd slowly stir. Melancholy campers begin to take their tents down for the final time. The first of the Cerbyd meetings is called and we gather round. The discussions turn to what we are and could be. We have all shared in something special this is agreed. We have all become closer to one another than any of us first imagined possible in such a short space of time. We become caught up in fine details that have no place in the first meeting and I push for confirmation of what Cerbyd is. The possibilities of Cerbyd are defined as follows:

1) Cerbyd as Collaboration – with members of the community groups or Cerbyd. Or with the places we visited.

2) Cerbyd as Collective – working together towards Cerbyd’s shared aims

3) Cerbyd as Individual – individual responses to the journey and to any subsequent Cerbyd related experiences.

5) Cerbyd as Unification – as a way of losing individual artistic identity and creating work under the banner of Cerbyd.

The Mantra from the Cerbyd meeting borrows from Evel Knievel If it is possible, it is done. If it is impossible, it will be done. There is no time for nostalgia as the bus is packed and loaded one more time. The first half of the journey down to Cardiff is a somber one and it is not until Kathryn’s iPod is employed that spirits are raised.

Stirring renditions of Beyonce’s All the Single Ladies with a clever quiz related lyric change If you like it, you shoulda put a wig on it! Seated dance routines and hand jives ensue, the group peek then sleep descends over Cerbyd land as the wheels on the bus roll us towards tea at g39. I text Sean our ETA and he confirms there will be bunting.

As we pull off the M4 Brian and I decide now is the perfect time to play The Specials’ Enjoy yourself (It’s later than you think) causing an almighty sing-a-long on the bus. Unfortunately our eagerness has gotten the better of us and we have underestimated how far we are away from our destination. The sing-a-long deteriorates into a hilarious droning parody as we run past Cardiff Castle and into town.

We come to our final stop on the side of St Mary’s street, the group unload and say their thanks and good byes to Gillian. We arrive at g39 to a heroes welcome, bunting, welsh cakes, tea and coffee galore. Emotions run high with tears and embraces. Sean and Helen wearing pinafores is a moment to treasure for all eternity and I confide in understatement that ‘Yes, it did go rather well’. Brian and I are off again, dancing to a different beat as we head back to Gillian to return the bus. The total distance travelled is clocked at 1,037 miles but this is just the beginning.

There is a lot of improvisation with the cooking this evening and a real emphasis on the fast as we’re running late. Ben decides to get everybody’s shoes out and start taking photos of them just before the rain descends. We draw names from the hat to decide the quiz teams for the evening and by the power of Springsteen we speed to Llanbardan. It is soon very clear that some of the teams are taking the quiz more seriously than others. Lucy has arrived with a large plastic folder that presumably contains her team’s revision notes!

And now to introduce the teams- the Quiz Wigs with their team captain Lucy, Ben, Rosa and Megan. Tom’s Tarts with team captain Tom, Louise, Femke, Tomoko and Kathryn and finally Brian’s Swollen Ankle Paul, Gillan, Charlotte and team captain Brian. The obligatory team photos are snapped and pumped up we head into the heart of the Black Lion to commence battle and flex the cerebral powers of Cerbyd collectively.

The Black Lion is a stereotypical pub in a small village in West Wales but not one local bats an eyelid as the Quiz Wigs enter looking like extras from the Rocky Horror Picture Show. I spy the Cerbyd Quiz poster up behind the bar and get the drinks into quench the thirst of my erudite colleagues.

The quiz kicks off with Martyn the Quiz Master in total control. There is one rather contentious moment where things threaten to boil over. The disagreement typically involves art, specifically the name change of the Tate Britain. After some unnecessary and frankly embarrassing heated shouts from members of the Cerbyd team things start to settle down again. Martyn sticks to his guns and is not swayed.

A great Quiz Master never allows the facts to get in the way of a good quiz. Louise’s knowledge of the first testament is rather impressive and the half time scores in reverse order are the Quiz wigs on 34, Brian’s swollen ankle with 37 ½ and Tom’s Tarts in the lead on 43.

After rushing to cook and eat dinner, shock sweeps across the faces of the Cerbyd contingent as it is announced that there will be lunch at the half time interval of the quiz. It’s proper old school pub quiz grub too. Sausage, chips with buttered bread come out on silver plated platters and everyone from Cerbyd gets stuck in. None more so than Tomoko, who has only recently discovered the ground meat goodness of sausage. Cerbyd return for the second half of the quiz plumper and slightly sleepier than before but quickly the brains are ticking over again as Martyn fires the questions off.

The final scores are in! In last place is Brian’s Swollen Ankle with 53 ½, the Quiz Wigs come in second on 54 but Tom’s Tarts are the run away winners with 59. My team celebrate respectfully and there are three cheers and a pint of bitter for Martyn for being quizmaster and such a willing host. Needless to say the regular quiz teams score handsomely and leave Cerbyd in a league of their own.

Before we leave there is time for the wigs to be put to great use as a look-a-like competition featuring the Cerbyd captains keeps the whole pub amused. The penultimate day of Cerbyd’s adventure is nearly up with the group wanting to stay up late and savour every last moment but not one of us can muster the energy and soon we are sleeping soundly. ﻿

I am certainly not someone who claims to hate Mondays but if I were then Mondays, that fall within Cerbyd time would have to be renamed. They could be Cerbydays instead if it did not sound so unimaginative. The light streams in through the yurt and wakes us early. Breakfast is full and restorative and we head off down the road to meet the Llandysul Paddlers for some early morning kayaking.

I sit out the kayaking with Lucy – we are bad ears and pregnant respectively. Cerbyd absolutely love their figure hugging wetsuits. Queue some celebration and bonding as one by one they reveal themselves in neck to ankle rubber or more accurately neoprene. I am Graham to Lucy’s Cilla.

The group are given a health and safety briefing then play some games which first involve lunging then test their speed, agility and reactions. Cerbyd just about pass and after a long week it’s obvious why. I do a quick prayer that no one dies to David Hasselhoff and start filming the group rowing around the practice pond. Both Ben and Megan pick it up quickly and are navigating their way around but soon the whole group are ready for the rapids.

The gauntlet has been thrown down and I feel like I am filming a children’s TV show like ‘Get your own back or the why don’t you club’. Disappointingly there is no sign of Dave Benson Philips. Taking it in turns the group hit the rapids showing their competency. Only one or two roll their kayaks and it would be rude of me to reveal which! Those who roll expertly regain their prowess and finish the challenge well. The groups do a second run of rapids and again they are impressive. As the group get out and in pairs carry their kayaks up the riverbank they are obviously exhilarated by the experience.

Once back on dry land and out of their wet suits Cerbyd rush off to The Power House for an event organised by Mike and Sara. It seems the whole cast of the Archers has turned up to the event too. Cerbyd replenish on tea and biscuits before being led by Mike in regression through the events of the week that is very taxing and emotional for us all. The Cerbyds, Aldridges and Archers head back to the Old Mill for a spot of lunch and soon we are off on our way again. The good food and extreme sport cause many of the group to take forty winks on route to our final campsite at Devil’s Bridge.

We set off down winding roads and I am aware that very soon we will have to go back to normality. In fact, it will be sooner than the group think, as I’ve arranged for Mike & Sara to put us up for the night. They have kindly offered, in a good ol’ fashioned community spirit kind of way, to cook us a hearty meal and give us beds for the night.

As we approach the Old Mill in Llandysul, I smile to myself knowing the warm welcome the group will receive and deserve. The warmth and comfort of the house for a time seems alien but Cerbyd soon get used to it. The food is excellent and is quickly and gratefully devoured by all. The group is extremely tired from the exertions of the past week and after having a few thimbles to drink retires. The Cerbyd rebels, of whom I am one, decide that sleeping with a roof over our heads will compromise our experience so we head out to the yurt to drink a little more and sleep.

The night is punctuated by playful arguing between a rather tiddly, gin soaked Louise and Ben. I throw my ore in every now and again with Megan and Briaan playing peacekeepers. It is all well natured and a result of a long day. A young local lad going by the name of Jet becomes an honorary member of Cerbyd for the evening as we eventually all sail off to sleep but not before Jet is made to reveal who his favourite Cerbyd member is. It is Tomoko.

Louise deserts the Cerbyd rebels in the middle of the night and thankfully, we find her asleep in the comfort of the house after our search party got a little sleepy. I was particularly glad that a ferocious badger had not mauled her.