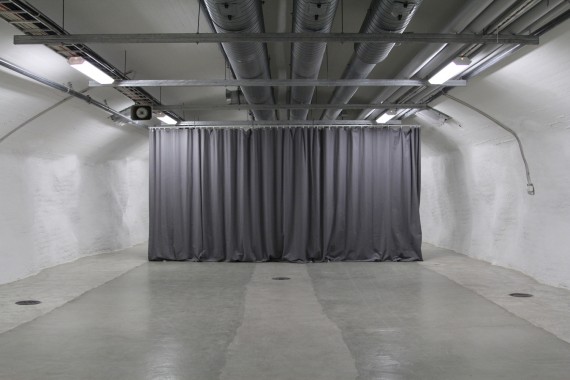 The first three days at Vapaan Taiteen Tila were spent installing the exhibition that was to form the backdrop for an explorative discussion between two artists. The gallery has recently moved, and so what was initially going to be a relatively small exhibition of work had to be adapted for a colossal former air raid shelter, essentially a seven meter wide by ninety-two meter long tunnel carved out of the rock underneath a park.

Monday included a lot of head scratching and further planning. As the gallery has no usable wall space, we worked with the gallery technician to build freestanding walls. The entrance was defined from the exhibiting space by a large curtain, and has become a space for discussion and analysis between the two artists and audience members.

Five artworks were developed / installed in relation to a specific curatorial strategy. The embedded video provides a tour of the exhibition, which opened to the public on Wednesday evening with a well attended preview. The resulting discussions between the artists will be developed in to a text over the coming weeks.

Next week, Flis Holland and I will embark upon our collaborative project. Beginning with a week long residency / exhibition that has been secured at Vapaan Taiteen Tila in Helsinki, we hope to use this time to develop an ongoing research led project that can be presented across Europe over the next 5 years. This collaboration was initiated during the planning stages of a solo show of Flis’s work at Hanover Project, a gallery situated in Preston that I co-ordinate as part of my role as Fine Art Lecturer at UCLan.

In her practice, Flis Holland investigates the compulsion to return to locations that are no longer physically accessible, and their relationship to the places we currently inhabit. In particular she is interested in the use of scale reconstructions as a means of revisiting, further facilitated through the use of photography. I select and digitally archive places in moments of apparent stillness, unpopulated yet acutely defined by traces of human activity. Capturing failing architectural structures in apparent decline, I interrogate the relationship between digital technology and notions of presence, absence and temporality.

Whilst my practice strives to archive transient real time events, Holland seeks to reconstruct images that were never taken, moments that were never documented. Can the memory of a place be confined to a two dimensional digital representation, and does the construction of a replica in real space bring you closer to the space once inhabited? How can we better understand a site that no longer exists, that is no longer accessible and that can only be imagined?

The relationship between place, archive and memory will be explored at Vapaan Taiteen Tila, a subterranean ex-bunker in Helsinki, Finland.