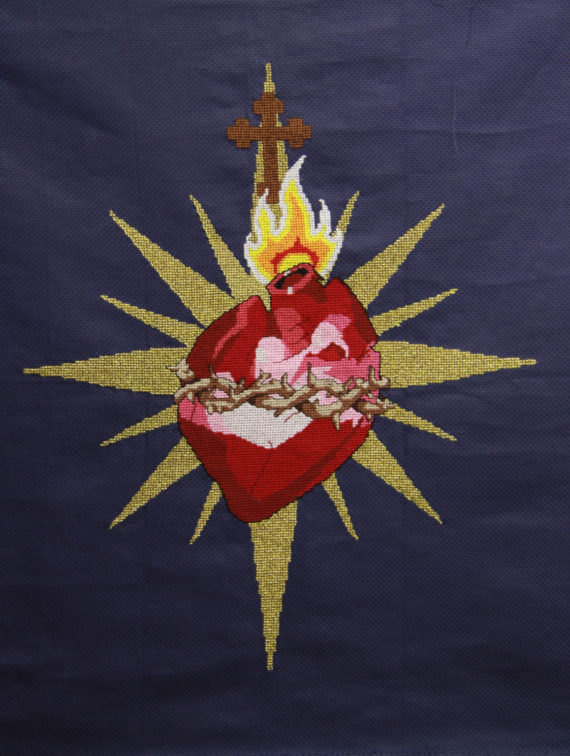 My first big Contemporary Art Cross-stitch project began late in 2014. I applied for and was awarded funding for the project, which involved free Contemporary Art Cross-stitch workshops, a participatory project, and the undertaking of my own large scale piece of work. In this blog I will be writing about my own piece of work, entitled The Thread of Life.

This project was inspired by my work Labyrinth (see previous blog post). I had been thinking for a long time how amazing it would be to cross-stitch a full size maze, which could be hung from the ceiling with long threads hanging down to the ground forming pathways which you would walk around. For many reasons this would be impractical, but the idea stayed with me. 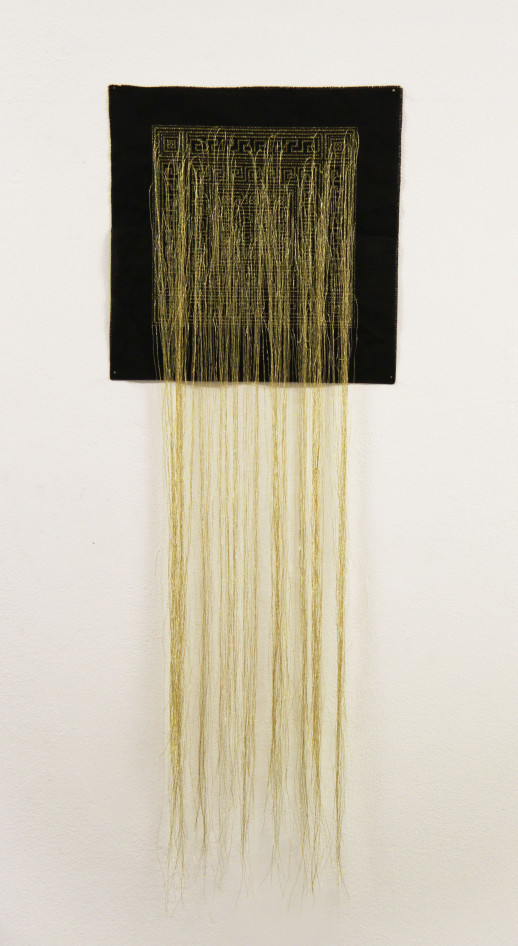 I also had been thinking for a long time about the Three Fates from Ancient Greek Myth, who are said to spin each person’s thread of life, thus determining how long they would live for. This made me think of our DNA, and how that can determine what happens to us in life.

These ideas came together as I started to think about making work in cross-stitch which is appropriate to the medium. I started thinking that Aida, the grid like fabric used in cross-stitch, would work very well as a kind of mosaic, and I started to think about crumbling Byzantine domes with areas of exposed plaster. I decided to put the theme of the Three Fates and DNA, together with the idea of work suspended from the ceiling with long threads hanging down to the ground. I wanted to use gold metallic thread to give an ethereal feel to the space created inside the threads.

I gave myself one year to complete the project, which was a conceptual piece of work based on the idea of time. I like how unfinished cross-stitch work looks, but had never had a reason to present something unfinished before, so this was the perfect project. I think that, in unfinished work, you can appreciate the craftsmanship rather than just looking at a finished “picture”. This piece of work would be presented exactly as it was left after one year’s work. The fabric was painted with clay to give the look of a crumbling Fresco. 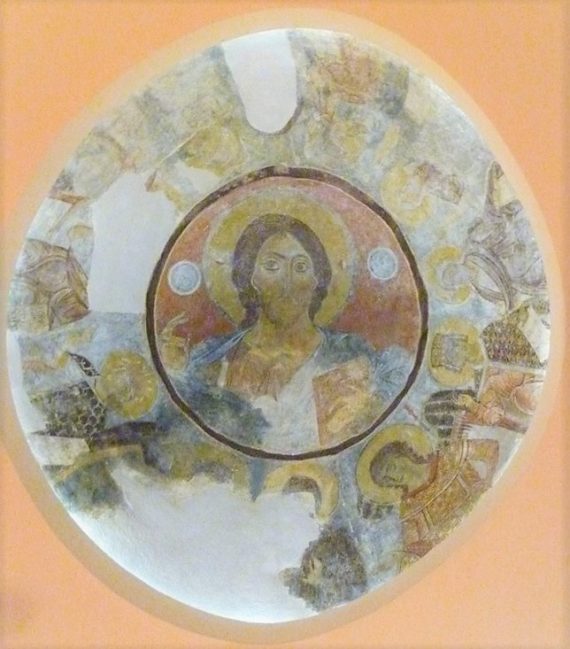 Motifs of the tools relating to the Three Fates and their names were incorporated into the pattern. As was a heart, which I use in my work to symbolise death, and conversely life. A DNA strand runs around the edge of the pattern. The colour palate is based on traditional faded fresco colours, of blue, yellows and terracotta’s. 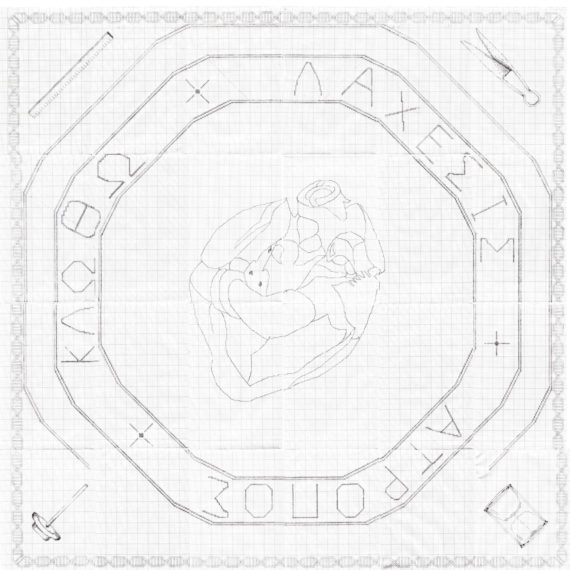 The Thread of Life Pattern. Graphite on 24 sheets of paper. 2014

The pattern was drawn up on 24 sheets of A4 graph paper and the finished work is approximately one square meter.

In my last couple of blog posts I have written about how I want to use cross-stitch as a form of contemporary fine art. In the past this has got me in to trouble with cross-stitchers who have misunderstood my meaning, so I wanted to write a little about my understanding of cross-stitch as a contemporary craft.
In recent years, cross-stitch has had a makeover, and I think it’s fair to say that in some circles cross-stitch is “cool”. The traditional view of cross-stitch is an old fashioned craft, making samplers or perhaps buying kits to make nice, rather twee pictures, but the revival and reinvigoration of craft in the 21st century has changed this. 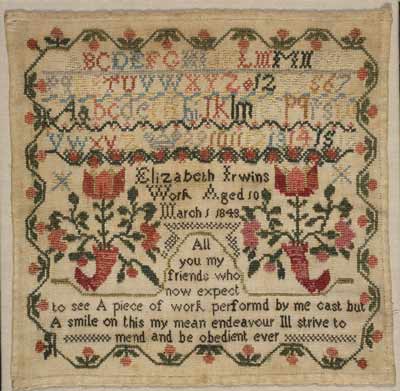 It seems we have the Victorians to blame for the old fashioned reputation of cross-stitch. Before them it was a much more fluid form of embroidery, with its ancient origins in the decoration of household linens. The Victorians came along and added rules and formulas to how cross-stitch should be done properly, and this legacy is still with us today. For example, a “row” of stitches should be created by going from left to right, and then right to left to create the crosses. There is very little room for free hand interpretation if you want to do it “properly”. 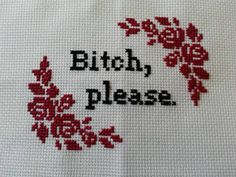 From a kit designed by Subversive Cross-stitch.

The contemporary patterns and kits are a kind of parody of this old fashioned sampler style. Brands such as Subversive Cross-stitch offer witty and edgy cross-stitch kits in the style of the biblical quotes of the past.

There are new designers creating cross-stitch works and patterns, using wonderful materials and embellishments, and creating a new look for the medium. As a form of craft it is fair to say that cross-stitch is reinventing itself for a modern world. This is great, and I’m sure that many people discover cross-stitch they will develop new skills and a passion for the medium.

However, this is a separate world from my own practice. I am no expert in contemporary craft, or what is happening in the world of cross-stitch, because it’s just not my area. I am interested in making artwork suitable for a contemporary art gallery setting, with little or no reference to the traditional form of craft and the connotations that go with it, unless it is relevant to the work. I see the only reason to make a work of art in cross-stitch is because it is the most suitable medium for that piece of work. My Contemporary Art Cross-stitch works have to have a sound concept behind them, and it is by no means a case of making a nice picture. I don’t care about the neat backs of work, working with sewing hoops, and the other general rules that go with cross-stitch. The sense of pride many cross-stitchers feel in completing a kit to a high quality standard is by no means my aim.

I feel that, for cross-stitch to be taken serious as a form of contemporary fine art it must be treated as such, without basing itself in contemporary craft. It is not fashion, nor a reaction against the style of whatever went before it, it is just the realisation of a concept.