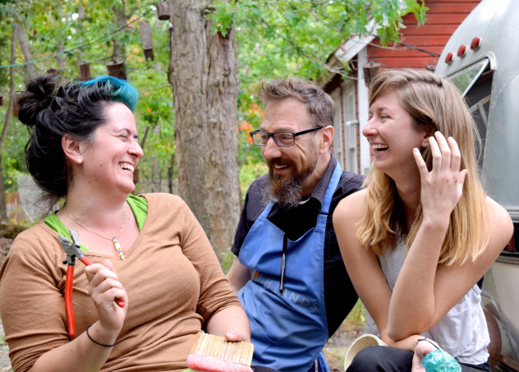 The Fellowship came at a frightening time, politically.  In the UK, the Brexit debacle had just happened, and in the US we were in the final months of the US Presidential election, which would deliver a victory for Donald Trump.

Perhaps the driving force behind both of these disasters were deliberate campaigns to foster a sense of fear of the other.  Not only were citizens encouraged to fear the foreigner, liberals and conservatives were being hammered with propaganda to make us fear each other.

It was an atmosphere of fear, and this fear was reflected in the media, social media, political rallies, in conversations, and on the street.  And the fear generated in one segment augmented the fears in the others.

In the thrift/charity shops I bought mirrors and laser etched the text “I’m afraid of you” onto all of them.

There were grand etched mirrors in gilded frames, make-up mirrors, medicine cabinet mirrors, full-length mirrors, children’s mirrors with things such as “angel” printed on them, stainless steel ‘safety’ mirrors, vintage mirrors with black spots, mirrors that served as decorative accents, and mirrors with no adornment whatsoever.  Each mirror suggested a gender, age, socio-economic status, and taste.  Some were mirrors to be used, and some were purely decorative; some were of good quality and others cheaply made.

The idea was to create a mirrored chamber, where these diverse mirrors would reflect and echo the text, the viewer, and anyone else who was in the room at the same time.  Again, time and facility constraints prevented an installation, and most of the mirrors are stored in a house in the US awaiting exhibition.  Some were installed in the exhibition Embracing Narrative at the Portsmouth Art & Cultural Center in Virginia during the international Glass Art Society Conference in 2017.  Another iteration will take place at the Royal Scottish Academy in Edinburgh in early 2018.