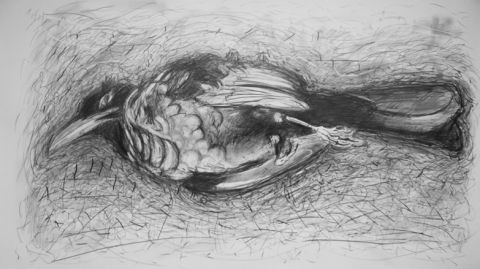 My original blog was a step into the unknown. It has meandered around in my head whilst I have been working and has given me a reference point around which to think. My work has changed since I started. The Dead and Dying Flowers are on the shelf for the time being?

My mother  told of a day when she thought she had won the football pools and excitedly told my father. He in turn pointed out to her that the document that she showed him was her record of results and was made  after the games had been played, and did not match the failed predictions of her original crosses. There followed a period of bitter disappointment for which he was held responsible. I wonder whether this switching of forms was a simple mistake or was a necessary dream which created  passing relief from disappointment; she dreamt the joy that she could not experience. It seems possible that the making of, and hopes invested, in artworks can be prone to this kind of necessity, and  that it might provide motivation to live the life of this thing called ‘artist’.  The ‘cashing in’ of an artwork in terms of meaning and quality is a more protracted process than the short term matter of collecting on the pools but retains the  capacity to nudge what might be real to one side to enable a temporary suspension of anxiety.

My mother was something of a lost soul, never really finding herself, having to make do with the unending ebb and flow of disappointment and hope. She felt an affinity with the sea – quite a common thing.

Walking along the beach up and down between the tides is what I do, defined, channelled, directed, by the extremities of low and high. My beachcomber looks back over his shoulder,  nostalgic, searching for purpose in his lines. And looking back might metamorphose like the pools coupon into a looking forward, hopefully knowingly.

Applying graphite powder like this is quite hard work, rubbing, smoothing, fixing and repeating the process over and over. The result is this mouthwatering skin. My skin. I traced the marks from the first tentative recognition of my mother’s presence in my drawings, formed the skin and damaged it. A loving damage? Wire wool rubbed a sore spot, a needle scratched and picked away at the surface. An erasion produced a surprising effect.

‘Straitjacket for a Child’

Simply, or only, a graphite rectangle bisected by a line? Ambiguous, the line is made of the same material as the support; it is the paper, transforms the one body into two, two rectangles held still by some magnetic attraction?  Stillness is the surface and at the heart.  Two graphite rectangles are a straitjacket for the child, its stillness a claustrophobic binding. Magnetism? The straitjacket does the work.

In my beachcombery approach to things I find words to sit with whilst I look around.  A problem with theory is its density and scope, and I have always to play catchup. I visit, as it were, between the tides. I picked up this word  ‘punctum’. It’s a funny shape and it could come across as a little bit arty. Its origins are in anatomy, meaning a sharp tip. My understanding of Barthes’ use (in Camera Lucida) is that the punctum is that detail of a photograph which ‘wounds’ or ‘bruises’ the viewer in  a way that engenders empathy between viewer and object. Graphic, graphite, photographic, the drawing may not be a photograph;  a tentative feeling for the idea connected me with what I was doing.

At the time that I was making this drawing I was  scrabbling around in bits of Lacan and Hal Foster to try to understand ‘The Real’.  I came across the notion of it being prelinguistic, undifferentiated experience and this as I made the white space sit between the two areas of drawing and it chimed with my feeling of what the Real might mean. There is a particular emptiness for me in this line. It seems to be there and not there – both act and consequence, an ambiguity. I am drawn to the line which in turn and turn about, draws me, the drawing a mirror into which I look, as as I look.

My mother died in early January this year. She was 91 years old. Thoughts of her, my relationship with her, her forming of me, my being with her, came to reside in the white space that both divided and united the two ‘halves’ of the drawing. Feelings of division and unification reiterate in my consciousness, and a sense of the irreconcilable. And back to my mother. She was a fierce person. She frightened me for the whole of my  growing up and beyond. She meant to, but kindly; she thought that she was doing the right thing. One of her stock childrearing phrases was that ’….you have to be cruel to be kind.’ I used to draw. I copied cartoon cards – Snow white, the Dwarves. She was so impressed. She showed off my talents to friends. She was proud of her little boy. But she used her pride; I was a light that reflected upon her;  the line was being drawn and redrawn in the distance, contradictions, and ambivalences, of our closeness.

I browse around. Much of the stuff is difficult for me. Often I am just looking at words. I looked up Hal Foster on ‘The Real’, crossed to Lacan and ‘The Real’, Found lacan.com, read ‘The Rustle of Painting’ by Barry Schwabsky, linked to David Row’s painting/website. (Art online cannot come across like the ‘Real’ stuff hanging or standing somewhere, but Row’s work struck a chord with me.)  Solid and wordless in itself,  it could be ‘felt’, looked at. I followed up with more of Row’s thinking via  www.davidrow.com The gap between the words in the conversation that occurs with other works and the gap between the object and the conversation had with it by the artist, the gap between the words and my understanding, the gaps between the possible wor(l)ds, leaves me struggle room, like a loose straitjacket.  Looking at words fits with the idea of being a kind of artist beachcomber wandering about between high and low water looking for stuff. It can be a word, or a piece of painting, an apparent connection between things and myself. It goes in the bag.

This is an image of an object.

The object is material.

The material supports an image.

The image forms in a medium.

The medium is material.

The image of the object is material.

The material of the image is a medium.

Medium and material are real.

The real is wordless.

The material of the object is paper.

The paper supports an image.

The material of the image is graphite.

Graphite and paper form an object.

The object has a name.

The object is a drawing.

The drawn have names.

This is a felt object?

Felt between the lines?

Felt in the spaces?

Felt through the names?

Felt through the material?

What is drawn is not there.

Do names settle lightly on material,

There are occasions when I ‘paint’ with a sense of the perverse. Deliberately provoking an argument, I prod and poke paint and defy it to become a painting. I seem to want to paint so badly that something purposeful might arise, this art thing somehow there despite my doing my best to prove that it isn’t, painting sustained by feelings of wilfully pleasureable annoyance. There is something deeply childish about it all, like making a mess in order to attract attention, something Freudian in the smearing of paint. ( This a both confession and description? ) Usually I get to a point where I am ground down by my annoyance and I bin the work. But despite the anxieties of it, it still LOOKS like something, has an appearance, maybe a personality, where its connection with stuff called art begins to crystallise along the edges. My stuff doesn’t mean anything other than what it looks like. I dislike the basic designy art class notion of ‘mark-making’ but if I’m not careful, or more to the point, if I become too ‘careful’ that’s what will be the outcome – designy stuff. And paradoxically, all I am doing is making marks? But I am really not doing that. I am marking, figuring and disfiguring, a surface . That is why ‘mark-making’ is an academic exercise, whilst marking a surface is an engagement with something. To paint is to walk a tightrope where the superficially similar in terms of acts disguises deep differences of motivation and meaning; I can stand before a work that I like and watch as it metamorphoses into a nice design for a rug.