In level 5 last year I decided to go outside my comfort zone and create an installation with umbrellas. The reason why I decided to create an installation is because I have always worked two dimensional up until this point. My artist inspiration was mainly Jackson Pollock and his “drip” technique. After completing my eleven umbrellas and displaying them the way I wanted to, looking back I was not satisfied with the outcome of what I had created. Once the installation was displayed I realised that it didn’t look finished, looking back now I could have created more umbrellas with various materials and spread them out across the wall to give the feeling that the installation was the only thing you could see.

But now that I am in my final year of university I have thought long and hard about what I want to focus on in my studio practice. After carefully consideration I have decided that my focus this year it going to be documentation of process and how it influences the work. 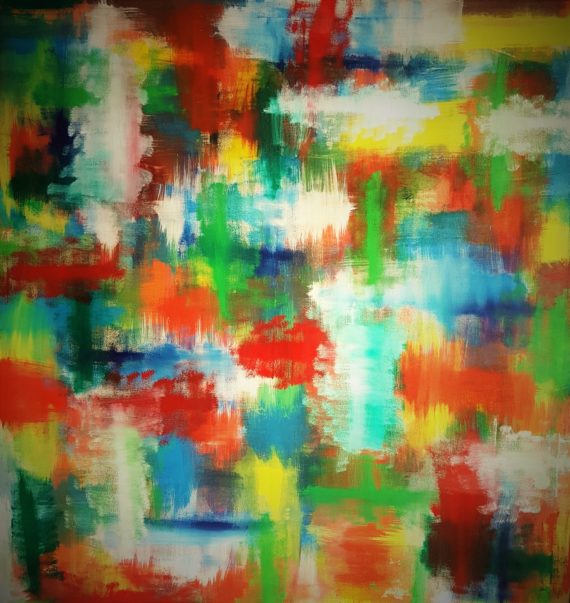 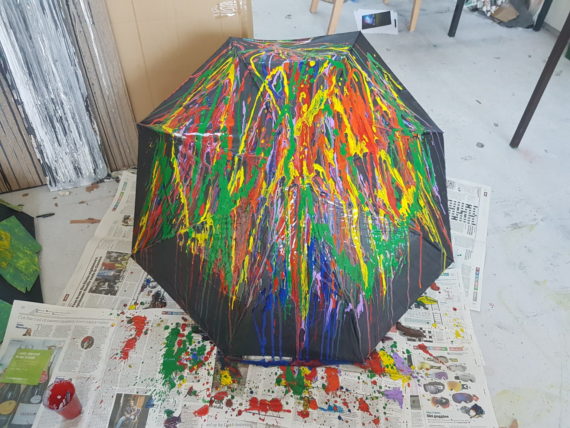 As I said in the previous blog post I wanted to create a installation of my studio space, I shared this idea with my tutor and as a result of that the part of the installation that was going to be my table with my paints, palette and tools, is now going to become a three dimensional print of the objects. The reasoning behind this is because then that way the objects will not just be stuff on a table it will become apart of the artwork.

So with that in mind the artists that I looked at were Iris van Herpen and Fischli and Weiss. Starting with Iris van Herpen, she is a fashion designer that always pushes the boundaries on what she can create within the fashion industry. Iris is one of fashion’s most talented creators, within Iris’s designs she uses a combinations of traditional and radical materials. One of the more radical aspects is three dimensional printing, not many people are comfortable using technology with fashion but Iris was the pioneer of this. Herpen’s intention is to use the techniques of traditional and technology to create a series of clothing that combine the past and future.

Even though I am not creating clothing for my degree show, I can relate to Herpen because of the way she is using old and new methods to create a series of art. I am creating multiple paintings with the traditional method of acrylic on canvas and then I am using the three dimensional printer to combine the two elements together.

At this point the idea was coming together I needed to find an artist that related to my work and what I wanted to do for my installation, this is were Fischli and Weiss came into the equation. These artists can transform a simple room into something extraordinary. Fischli and Weiss have the talent to use everyday objects, and combine them in such a way that the viewers have to look at it in a completely different way. Their work has a palyful, childlike atmosphere about it, which makes the installations so much more intelligent. One of their installations was called ‘Room 10,’ while looking at this room you would think that it is just a workshop full of tools and rubbish. But if you take a closer look at the installation and the objects are actually three dimensional objects of the original.

Like I said with the previous artist I can relate to Fischli and Weiss because they have made an installation that would just be a room full of stuff to an installation that has multiple art techniques. This is what I want to achieve within my final piece, I do not want to just place my tools and paints on the table I want to use different processes to create one installation.

I have found, finding artist’s to relate to my work was difficult in the beginning. Most of the time I do not generally think about the artists that use the same style, colour, technique or process.

The thing that most interested me about these artists are that they are all very different, some of the artists are about the colour used, the process itself and texture. With having all these various different artists I always able to use processes and techniques that I have not used before, so with that in mind I began to experiment with some ideas. The one technique that I wanted to use was creating texture within my work, I have noticed previously looking back at my artwork over the years that most of it is quiet flat. I was thinking to myself that if I added texture it would add a different dimension to my work, the only problem was that I like to use acrylic paint which drys quickly and is not easy to move once applied to the surface. But I still went ahead and tried to create texture with just acrylic, the result in doing this was that the more paint I added the more shiny the surface got in the end the fabric almost became a vinyl texture which is not bad but not the look I wanted for my artwork.

Using Ian Davenport as the next artist to inspire me, I decided to use his technique of dripping paint and I used my acrylic paint watered it down and then began pouring it on to the canvas. When I began using this process I noticed that I would have to create several layers of drips to get the texture that I want. I think in the end I created about fifteen layers and it did create a depth to my composition because you could see each layer but in the end it was not what I wanted as my end result.

I have been playing with the idea of creating an installation of my studio space. I came up with this idea because my artwork is all about processes and how that influences my work, so I thought instead of having one or a series of works on the wall as a final piece I would create this environment that people could walk into and feel the atmosphere of an artist working. The reason I thought of this idea was not just because I use process as my main element to my work, I did not want to present a polished piece of work that just shows just one process that I used through my year at university because I did not just use one process and I do not believe that I can get that across without presenting it this way. Like I said in a previous blog this is the part of the process that makes me more stressed than I need to be.

Composition within Jackson Pollock’s artwork is something that is not just created with one element, there are a combination of elements that Pollock juggles with, but with composition it is not just about the way Pollock puts the art together, it is also about the scale of the painting whether it is in a frame or not.

As Metzger’s points suggest that creation something in any medium that the artist can find always included process, which generally takes the structure of something more than just merely juggling the materials.

Even though Pollock’s paintings are created with different materials that range from everyday objects to paint, the layout of the composition is thought about in detail, as Pollock uses black paint to almost sketch out the initial outlines on the painting before throwing on more materials to create detail. (Cole, I (1999) Gustav Metzger: Retrospective, Art ass Process: A Baker’s Dozen. Oxford. Museum of Modern Art, Oxford pp. 31-38)

I can relate to Metzger’s point of juggling multiple elements to create a structure of a painting. I have found that working with process as the main element to my work a lot of parts need to juggled to achieve what I want. I have to think about what tools I want to use, the colours of paint, the technique and also how much I want to apply to the canvas in the first place. In a way it is almost like having a routine to you own work, things about what parts you want where and do you want a lot of materials on the canvas or not. It is definitely a thought process that I go through every single day.

In my dissertation I briefly touch upon the process of traditional western art that do not so much include the processes of making as representation or evoking of temporal experiences of more than pending duration in the content of the outcome. Traditional ‘history painting,’ which is designed to tell a narrative through expression, gesture and motion, comes into this division, perhaps even more conclusively than in generally realized. (Cole, I (1999) pp. 31-38)

When I was writing this for my essay I thought that it had nothing to do with my work and how I was creating it because I was thinking more about the process and how that effects the composition as a whole. But now that I look  at the writing more carefully I can see that my artwork does actually fit in the this process pretty well. My artwork is expressive and has motion throughout it. As well as my work Jackson Pollock’s artwork also fits into this process. Pollock would apply layered pigment in the most irregular ways, the paint would either be poured, dribbled, flickered or splattered across the canvas, Pollock would not use the traditional method of using a paint brush to apply pigments, he would use sticks, trowels, and anything he could get his hands on. The one thing that Pollock does well is that there is no central point to the painting, every inch of the canvas is covered equally, the reason for this is because Pollock would constantly move around the canvas which was on the floor always. (www.metmuseum.org/toah/works-of-art/57.95/, (no date)

Thinking about the processes in this way makes me realize that no matter how much I want to get away from Jackson Pollock and the styles that he uses, there is a correlation between my artwork and Pollock’s.

Using Metzger’s natural process, it suggests that painting of a flat surface can be used to create organic substance and detailed content. (Cole, I (1999) pp. 31-38)

Applying this process to my work makes me realize that creating a composition on a piece of un stretched canvas seems to create a more organic piece of artwork than if I was to plan every single bit of detail. Looking at the work that I have already  created makes my think that the outcomes of each and every one of them is organic in their own way, I do have to say that there is some structure to my compositions for example the size of canvas, the paint and tools that I use to apply the paint to the surface of the canvas. The format is definitely an important part of the process, as the format of the artwork is just as important as any other element involved in creating a composition, the size can influence the way the spectator or the artist themselves see the art when it is finished.

Metzger also suggests that another one of his points is that documenting the process of artwork is where the artist is being recorded and photographed to document the progress of their work. This type of process has been used in different types of art like music and theatre to show their development. Documenting process became a big part of the art industry people were becoming more interested in the way the composition was made than seeing the final composition that the artist created behind closed doors. (Cole, I (1999) pp. 31-38