I discover I have been exploring reverse engineering as I am trying to create an object which already exists physically – the needle. However as the needle in the video (the source material for this project) has been altered to become the no pointed needle it for me becomes a new object that doesn’t exist physically. Although the object image can be printed and measured through a video still print. There are technologies which are used in reverse engineering such as 3D scanners (which can create a CAD drawing of an existing object), which in this case wouldn’t work because there isn’t anything 3D to scan, as the object only exists digitally as moving image or a video still.

The no pointed needles came out the machines this week to much excitement. After all this time of thinking and trying to visualise this very particular object I can now hold it in my hand. I have two sets of objects, one from the Plastics RP machine which has two nozzles which dispense liquid plastic according to the design specified. The other set comes from the machine which prints a layer of binder on a plaster type surface again to the specified design. The outcome in both cases are physical objects which can be handled.

The days at Hethel start with a conversation exploring questions, approaches, vocabulary, and plans of action. It transpires both artists and engineers have the concept and practice of WIP. In art it can be used to describe well work in progress obviously but can also mask the work we don’t want to finish, can’t finish or the work we never intended to finish. In engineering Derek was explaining WIP is viewed in terms of economical cost, as work in progress means labour, parts and space all being used up and the product hasn’t yet reached the customer. In engineering it seems important to be reducing WIP by reducing the number of operations (or procedures). Economies of scale come to mind, but not sure how that affects WIP or not.

The aim of today was to get a no pointed needle form that could be made longer or shorter to create a series of images/objects. Mirroring proved to be very problematic as identifying planes from objects with mirroring is something I think the software didn’t like. The point of the mirroring was as Derek pointed out to follow the way I had made the original video, by moving a needle in front of a mirror (plane) in a video camera. The first sets of drawings were abandoned due to mirror and plane issues so then we started again with much more success. It was interesting to discover that when they make clay models of car bodywork/shapes they make half up against a mirror – most cars are symmetrical (some notable exceptions the names of which i cant remember now). Symmetry works well in manufacturing – well is more cost efficient it seems.

Much excitement on my part as a series of no pointed needles were achieved and saved as STL files and sent to the RP machine. It was quite difficult to document the process as there is much movement in the machines but see images of work in progress. I was thinking as the machine was making the parts / objects that previously making had been a fully engaging physical process requiring constant attention and dexterity. Now we can set RP machines to produce while we do other things – it’s similar to rendering time in video, I image many a cup of tea has been made as video’s go through the render process.

We swapped more reading matter today, I have left Derek with 3 catalogues, Future Factories – the design work of Lionel Theodore Dean, by Paul Atkinson, Membranes and Edges by Michael Shaw and Gordon Burnett’s exploration of cultural issues through digitally crafted objects from a year in Australia. Each offer a different ‘art and design’ perspective on CAD/RP processes. In return I was offered (and accepted) TCT (Time Compression Technologies) magazine, a HAAS machinist’s CNC reference Guide and a rather chunky and splendid Machinery’s Handbook from 1979 – which includes all sorts of tables and charts including logarithms (both common and natural) I don’t know the difference they had phased the learning of these out before I reached that stage in secondary school.

The RP objects are cooling and setting in the machine and I will go tomorrow to extract.

Things being made too well & the exit nozzle with no exit

Some of the changes in UK manufacturing and difficult to track, Peter Mandelson would have us believe that manufacturing is a growing sector in the UK , where as the figures seem clear there is less work – how so. Well it all seems to come down to automation. Yes manufacturing is growing, we are making more things again, but the fact is this making is done more and more by automation (see previous entry about CNC milling machines in engineering which after loading and setting can be left to make the part).

From makers to machine minders

Derek was suggesting that the changes in manufacturing are also because we make things too well here in the UK that manufacturing suffered as the durability outlasts the possible replacement demand. The traditional lathe in the workshop was made in Colchester– we know this because the name is blazoned on the front, the same was found on all the older machinery in the workshop (not so on the newer CNC machines). When Derek and I were discussing the workshop machinery a week or so back he said that in the UK we used to make a lot of engineering machinery. That production moved to Taiwan in the late 1970’s. Don’t know where production is focused now.

Talking of things being too well made, my CAD skills are developing. Working with a set of existing drawings I added surfaces to an ‘exit nozzle’. Up to now we have been working with solid forms and then removing/cutting areas to make the desired shapes. In the exit nozzle approach the sketch is created and then a surface is wrapped over the form. The only thing was when I got to the end of the instructions the exit nozzle had no place for liquid to exit (someone forgot about their design intention there!). So I added one. We are going back to solid modelling next week when the no pointed needle moves on.

Find being in this engineering environment is influencing my working language, as I asked a Foundation student what her ‘design intention’ was for her final show,. It’s not such bizarre terminology for an art and design course but I never used it before starting this residency. Its possibly going to be more difficult to drop a ‘boss exude’ or ‘lofted surface’ into the conversation.

I’m starting to record the many warning notices I get as I instruct SolidWorks to do things it thinks are unreasonable or under/over engineered perhaps.

We had an interesting conversation on Tuesday about if being an artist is a vocation or a profession. I said for me it was a profession and it was suggested ‘was I only in it for the money?’ If someone is a professional are they really only in it for the money? Lets cross disciplines again to for example a surgeon, they love what they do but also want to paid appropriately for their investment in learning and developing a high level of knowledge and skills and their contribution to the subject.

Emily offers insight into the investment and returns shifting equilibrium.

So yes we were discussing the professional and the vocational, and the conversation went all over the place including ‘passion’ and that it is passion that drives artists and engineers (deduced from our small sample group) the drive to explore, learn, progress ideas and approaches within the discipline. Wonder if I should call the exhibition (at Hethel) at the end of this residency work ‘passion’ would perhaps be intriguing to potential audiences.

I was trying to explain the differences between the hobby artist (the fun & enjoyment model – vocation?) and the professional artist (the advancement of the subject – profession). I was saying that being a professional artist doesn’t reduce my passion for the subject it’s just I have (as many others artists have) invested both time and money to get my work to where it is today and it is about an exchange and not doing things for free. I wonder if the expectation to work for free extends to the engineering sector, I am thinking probably not but will ask next week. The performance artist Joshua Sofaer said in AN years back (and I have remembered it several times) ‘ I decided I would no longer work for free’ and it doesn’t seem to have done him any harm. When I worked with my mentor Richard Layzell we discussed ‘earning a living’ quite extensively.

I was intrigued to look at vocation and profession in the online dictionary – see image.

In terms of vocation I never felt a ‘calling’ to be an artist, but I have always been interested in ideas and thinking about things thoroughly and extensively beyond normal definitions and i found early on that art practice allowed me to do that. In terms of profession I have always loved learning and specialised learning, developing new knowledge (hence this residency project), I have been thinking about PhD study for a while now but as for a topic I can’t decide.

Oh and then the conversation moved into selling mugs (or not) and integrity – more about that some other time i think. 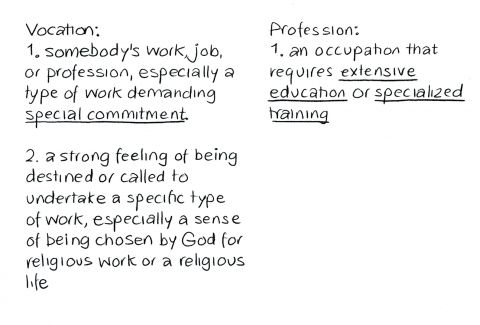 Today we are part way through Paul’s story about fish food (no engineering reference in case there was any doubt) when we are joined by Ben. He is another engineer interested and exploring the intersection between engineering and art, here to discuss ideas and what I am trying to do.

We watch my video where the no pointed needle appears and I have a number of stills printed out. I say it will be easier to work from the stills as I’ll be able to make measurements on the paper and I even have my own ruler. There is a burst of laughter as my green plastic, rather short ruler makes an appearance. I thought it would be good to make a visual comparison to the digital callipers that Derek uses. Lots of people still refer to these are Vernier’s (an older measuring system) which annoys Derek greatly unbeknown to Ben who immediate refers to them as said Vernier’s. I suggest that Derek have a ‘Vernier’s swear box’ for such occasions. Old habits (and terminology) die hard I imagine.

So many subjects, cross discipline dialogues and questions of ‘vocation and profession’ from today (and some CAD also), will blog them over the coming days as I unpick my thoughts.

Lastly for now, Derek did point out leading on from my last post about ‘finishing’, that engineering is another profession that doesn’t finish either. Each job or brief is the best one can do with the knowledge and resources available, which in turn presents new ideas to be further explored and tested. It’s the passion for the subject and exploration that means it’s never finished only periodic concluding points before progressing again.