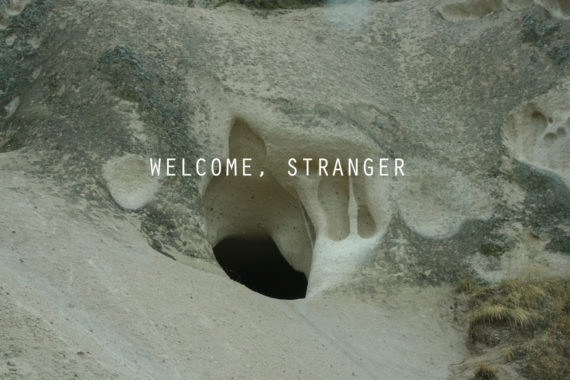 Having spent all this research time looking at different ways of approaching game design it was time to learn how to take the project one step further – into the realm of 3D. Being trained in photography and video editing I know programmes such as Final Cut Pro, Photoshop and Premiere Pro fairly well. I’ve also spent many hours looking over my friend Arnau’s shoulder while he created special effects in AfterEffects for my short film The Return from Annwn. But creating 3D shapes and spaces wasn’t something I was familiar with at all and the point of this project was in some ways to learn and explore what for me was a completely new medium.

Earlier this year I met artist and 3D graphics wizard Kris Lock. His and Jo Sweeney’s film The Vase in the Container was shown at Whitstable Biennale this year and is an impressive feat both in content and in the execution of the graphics. And luckily for us Kris said yes to teaching me and artist colleague Antonia Luxem how to start our virtual journey. 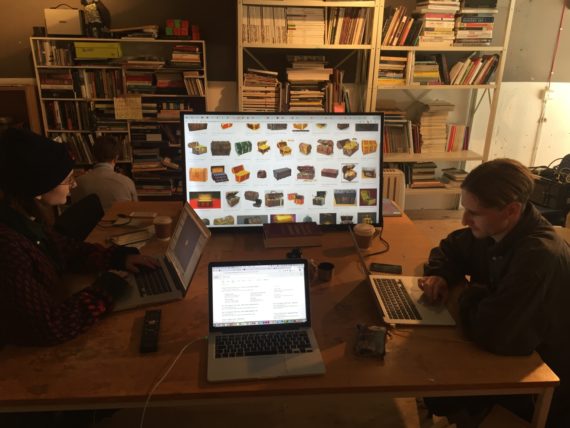 He suggested we look at three programmes in particular, all of which are free or have a free trial before you start paying. First we would learn how to create 3D-rendered objects in Blender. These were then to be imported into Substance Painter where we would give them their texture and surface finish. Lastly, the object – or digital asset rather – would be imported into the games engine Unity, where you can make navigable game landscapes to explore. We’d planned to spend an introductory lesson on each and then go from there but perhaps unsurprisingly, it all took way longer than we thought it would!

Starting in the autumn we had a couple of lessons on Blender. The idea was to start completely from scratch so we knew what was involved in making digital assets in this way. We started with an arbitrary item that one might find hidden deep in a dungeon – a treasure chest. 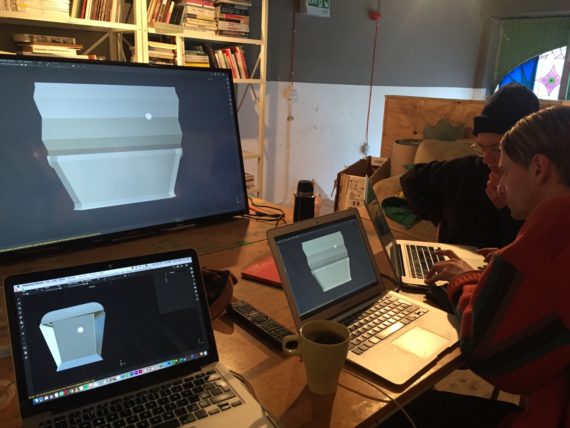 First we found a 2D image of a treasure chest which we sculpted a 3D object from, extending the image surface into space to make it an object you can zoom in and out of, spin around and generally view from every angle. This took a lot troubleshooting as it seemed that every time we changed our angle there was a missing plane or point in the object – or I’d gotten my horizontal planes crossed with verticals and so on. As with all computer programmes, learning all the commands and menu systems was also quite a challenge – especially as they are different in all three programmes!

We then learnt freestyle sculpting, which is where the concept of polygons came in – a polygon is the point in the wireframe that a 3D object is made out of. Having an object with a high polygon count means that you have a very detailed object, which is great for freestyle sculpting and makes it look great, but it also means that working with the object takes up a lot of computer processing power. So this is a juggling act. We essentially made some wicked looking handles for our treasure chests using a high polygon count and the sculpting tool and these almost broke my computer! 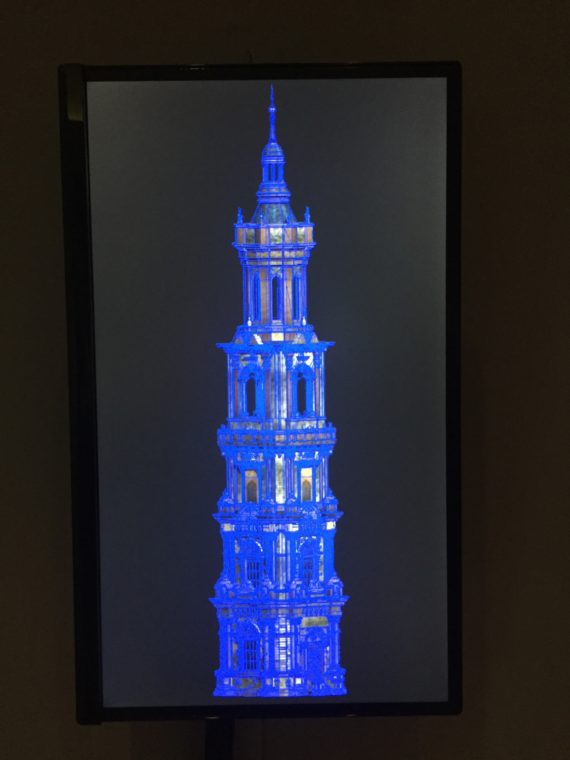 Without going into too much detail, Kris then taught us how to animate our objects using key frames and I’ve got to say it was really satisfying at the end of the session when my treasure chest lid opened and closed on its own. When you import the objects into a games engine, you can essentially trigger your objects to move according to certain actions, all details to think about from the very start when you are designing the object and the storyline. As with most programmes there are also numerous ways to do the same thing, and we also experimented with rigging animation, which is better for more natural effects such as body forms etc. 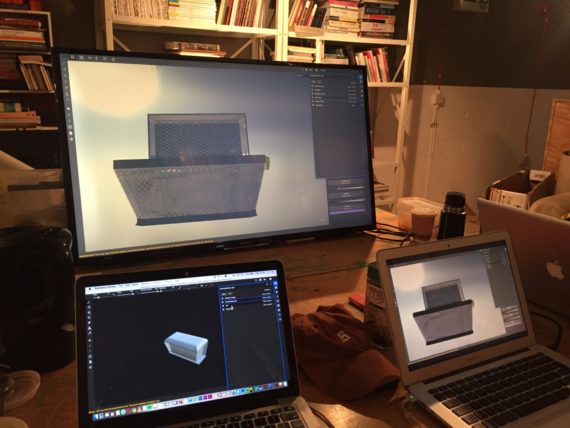 In our next session we imported the treasure chest into Substance Painter and played around with its texture. In order to do this you have to first explode the object onto a 2D plane in Blender, known as UV mapping. Pretty tricky to get right the first time around as both the proportions and the planes and edges tend to get tangled. What really struck me with the whole process was the amount of time it takes to do things properly and I’ve definitely got a new found respect for what goes into creating computer games. What I also liked about Substance Painter (apart from all the amazing textures it has) was that you have to bake your mesh maps rather than render. Pretty cool. 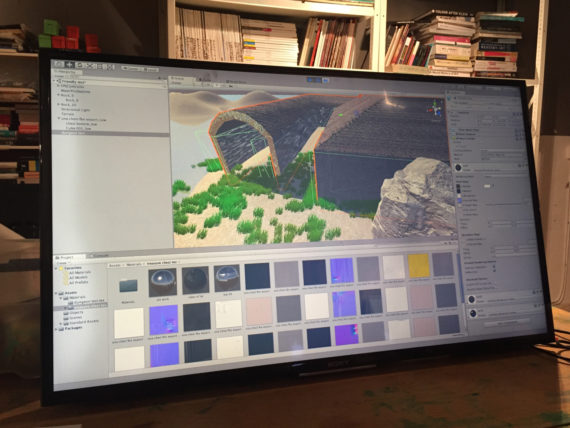 The idea when we started was to have a fully fledged dungeon environment with various objects and props that we had made in Blender and that we could then bring to life in Unity. Because of the sheer amount of time it took us to make objects this wasn’t quite to be and we didn’t have that much time to experiment in Unity as we would have liked. We did learn how to start making a terrain and a first person character that you guide as a player through your journey – and we got to place our cherished treasure chest (with opening and closing lid) in an environment, but there is lots left to explore. 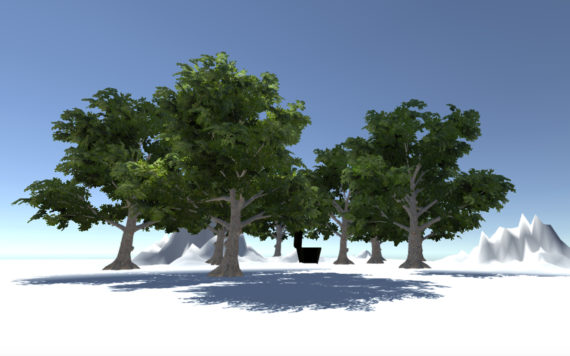 Luckily, there are tutorials online and we are going to have a few more sessions with Kris so that we get to grips with Unity as well as its various customised add-on programmes. Then there is always the option of using downloaded assets when creating environments to save on time, which is apparently is pretty standard unless you have a huge team of game creators behind you. What has been really valuable is gaining a basic understanding of what it takes for someone to make a virtual environment, so that whether I make something more advanced myself or in collaboration with someone, I have an understanding of the process. I still feel there is lots to explore technically and to experiment with before making any judgement on whether the medium itself works for the project I have been working on and am looking forward to taking the project further in the new year.