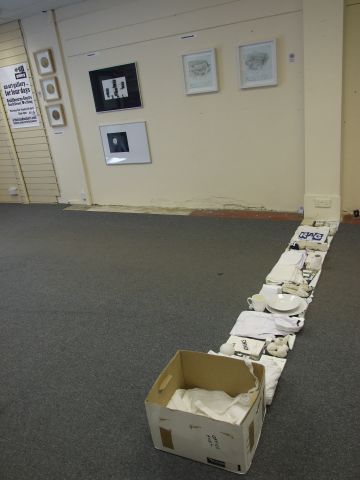 A few weeks ago, I had a call from a civil servant, wanting to know what the Empty Shops Network was all about. And – persuaded that it had some real benefit – he wanted to know how government could help. We bounced a few ideas around, and both laughed at the idea that we might actually be seeing evidence of the civil service working hand-in-hand with artists.

And then … well, you probably know the next bit. Hazel Blears MP has announced government support for empty shops projects, with £3 million pounds given to local authorities to give as £1000 to artists, groups and other community organisations wanting to use empty shops. It's one of the ideas we discussed.

Seems the Empty Shops Network is being listened to.

So yesterday, I headed for the grim north and spent a day in Coventry*. It's an amazing city; rebuilt in the 1950s and 60s, after being decimated in World War Two. It's an interesting mix, big tower blocks and small streetscapes following (I guess) the layout of the original medieval city.

I love 1950s architecture, all red-brick, post-war optimism and chunky signage. The 70s and 80s stuff not so good…

But with a whopping 30% of town centre shops owned by Coventry City Council, it's a prime site for artists and empty shops. Coventry Artspace are already using two, but we're now discussing a bigger project, using shops in key locations to bring life to the city centre.

And it can work; the vibrancy of the Canal Basin is testimony to that. It's a big building, the second biggest listed building in Coventry behind the bombed-our cathedral, and it's full of artists, new media industries, successful small businesses and exciting designers. The canal, a five-mile dead end from the main Birmingham Canal, is alive with traditional boats.

And more shops have been built opposite the main warehouse building. Our guide was film-maker Dom Breadmore, enthusiastic and passionate about the Canal Basin and fighting to get the area leading up to it redeveloped.

And how did this big creative hub, with a turnover now of millions of pounds a year and employing probably 200 people, all get started? Well, there was this empty commercial building and this bunch of artists who wanted to use the space…

*We're in Worthing; over the Downs? You're up North.

It's gone … the Pop-Up Gallery has done it's thing. It stirred things up, created a buzz (both online and in the real world), fired people's imaginations and then slipped quietly away late on Sunday afternoon.

It won't be forgotten; there's a gallery at artistsandmakers.com
a picture in the local paper, and a forthcoming feature in the Sunday Times Magazine.

Meanwhile the Empty Shops Network has featured on the RSA Arts and Ecology site, in this week's New Statesman and is in a forthcoming an magazine.

*For the Pop-Up Gallery, five days in the Guildbourne Centre cost £9.64.

I like the idea of shops you find in a back street, hidden round a corner, that you can never find after your first visit; that element of magic in the humdrum of retail.

And this week, in Worthing's Guildbourne Centre, we're adding to that with a Pop-Up Gallery. We got the keys to an empty shop on Wednesday; opened Thursday; we'll close the doors on Sunday and vanish. We're showing installation and painting, bubblewrap and core samples, drawing and photography, archaeology and concrete.

It's had a great response, with nearly 100 visitors on the first day. And while some were passing shoppers and teenagers who hang out in the shopping centre, many had the made the journey into Worthing town centre to see the Pop-Up Gallery after a short, sharp marketing blitz on Facebook, Twitter, the Artists and Makers website and local radio.

It's also created a buzz amongst artists and creatives in the town, and become the place to hang out. There was ample takeaway coffee, great conversation and the smell of collaboration in the air. 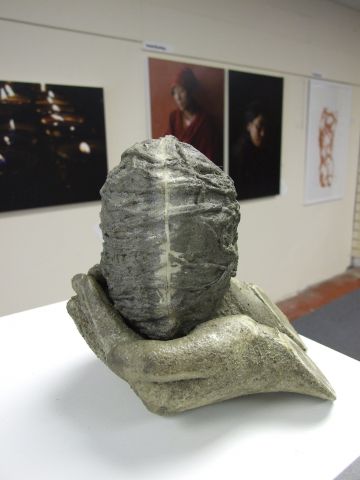