My first day back to work. ‘Place’, an ‘exhibition in a book’ by Tacita Dean and Jeremy Millar often helps me re-focus after time away.

Dean and Mililar’s synopsis of A K Dolven’s project looking back describes the complex, reciprocal relationships between our sense of identity and our understanding of the natural world. But how are these relationships complicated when the ‘nature’ around us is understood to be artificial, prescribed, constructed?

(I have recently read ‘The Garden of Mirrored Flowers’ by Hu Fang, a dreamy novel that follows an architect as he designs a theme park for a new Chinese city, inspired by online computer games and classical literature including the Quing Dynasty novel ‘Flowers in the Mirror’. A disorienting read, it is hard to navigate the layers of fictional spaces, imaginary walkways, dream gardens.)

A few pages on are images of Roni Horn’s Becoming a Landscape, and text exploring relationships between the body and its surroundings:

‘In stating that “the view is not separate from the viewer”, Horn recognizes one of the most important relationships in an understanding of place within contemporary art: a desire to re-enact the land with meaning, or to examine that area of overlap and coincidence between inner and outer spaces.’

“When space feels thoroughly familiar to us, it has become place,” says geographer Yi-Fu Tuan. A sense of place grows through familiarity, through processes of acquaintance? I begin scanning my 100+ new slides of Culpeper (which arrived from the lab just before Christmas) and consider this particular process of acquaintance – which is meticulous, repetitious; it involves examining, capturing, fragmenting and re-combining tiny details of a place to establish new relationships with it.

I really enjoyed A K Dolven’s show at Wilkinson last year, especially her video installation selfportrait Berlin februar 1989 Lofoten august 2009. It is evocative and giddy, it describes the sensation of being in a space and also inside your body. I loved its textural quality too, the colours and the grain – these qualities keep coming to mind as I plan my double-exposure animation sequences of the garden. 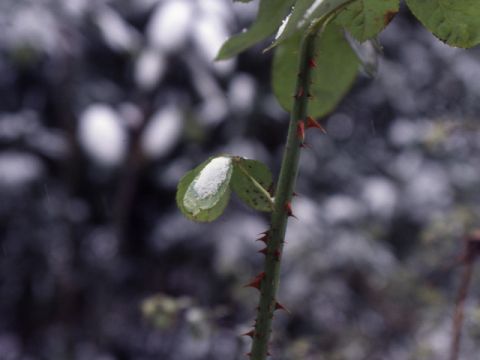 “I only need to step into the small alley in the garden, stroll between the green hills and blue waters, and in an instant, I would feel as if the cacophony outside is of no concern to me. I vanish within the middle of the garden, just as the world disappears into the garden.” – Garden of Mirrored Flowers, Hu Fang, 2010.

I was talking to a work colleague last week about my project at Culpeper. She lives near the garden and knows it well. She pointed out a fundamental characteristic of the site that I’d not considered before: that it is sunken into the landscape and that in order to enter from the street you have to descend – either via stairs or down a sloping pathway – into the space. The pathways and beds are layered, segmented by little stone walls and steps so that you are often walking up and down, moving higher or lower – but it is true that the perimeter fence always rises up around you; looking outwards from the centre of the garden to the buildings around is to look upwards and outwards.

I’ve been working with my double-exposure images this week, thinking about ways to develop them into a screen-based piece. Compared to the sequences of scanned slides – which give a stuttering but fairly straightforward representation of the site – the overlaid projections give a more complex expression, a grainy, patchwork video collage. Zooming in on small details is exciting too – shapes and patterns become more abstract, more evocative.

The images I’ve been testing weren’t made with any kind of sequencing in mind so changes between frames are erratic and random. But nevertheless some sense of movement is suggested as details in one or other image recede or advance in the picture.

I will try out some more thoughtful tests – masking out details gradually, progressively, so that transitions are smoother and longer.

Listening to a podcast of Tate’s 2009 Symposium Urban Encounters: Rethinking Landscape, I heard Susan Trangmar presenting ‘A Play in Time’, a 2-channel video installation shot in a public park in Hove. Trangmar explains how, in this and in other projects, she has explored relationships between “a phenomenological experience of space, the cultural constitution of place and the lived practices of space, which take place on site”. I found her articulation of these relationships very interesting, and they’ve helped re-frame some of the ideas I’ve been exploring at Culpeper.

Particularly interesting were her thoughts on aspects of ‘public’ and ‘private’ within urban spaces – the idea that community gardens are collectively shared, but also places for the individual to pause and reflect. She talks about the balance between sociality and solitude in parks, ‘where imaginative space mingles with public space’.

I often feel conspicuous when filming and photographing in the garden – laden down with bags and cases, my tripod mounted precariously across narrow footpaths or between benches. Culpeper is quite a contained, compact space, and while it is easy to lose oneself (psychologically, imaginatively) within the seclusion of the bushes and trees, there is little possibility of physically escaping or actually being concealed.

Trangmar talks of embracing the performative aspect of her shooting – making herself clearly visible so that her role as observer is as important in the ‘performance’ of the piece as that of the people around her whose activities the camera is capturing. This led to interesting discussions on the changing relationships between lens and subject in a country where people are almost continually under surveillance – the growing paranoia of a public who are aware of always being watched. Trangmar voices her concern that the increasing privatisation – and so protection and surveillance – of space is affecting our ability to relate or interact with others.

So far I’ve not photographed any of the people I’ve met or passed by in the garden, but I’ve been thinking more about the importance of their presence within my audio recordings, if I am to explore these interrelationships between culture and nature, between sociality and solitude.

I’ve not had an opportunity to visit Culpeper for a few weeks now – I’m eager to find out whether more leaves have fallen, whether the branches are more bare – and, crucially, whether the buildings are becoming more visible around the perimeter fence…

I have done some tests with my Super 8 footage this week though – projecting it into a suspended glass sphere, to see if my ideas about microcosms could be explored in a new ‘bubble’ installation. 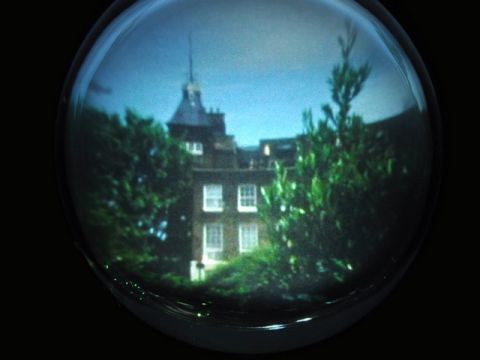 I cut short a rather overwhelming visit to Frieze last Thursday to collect some digitised Super 8 rushes from Sendean Cameras – one reel from the garden, one reel of test shots for another project in development Hagspiel & Comp.

I’d peeped at the filmstrip before handing it in for the Telecine – the coiling thread of mysterious, miniature images – and was waiting in anticipation for the video version. The guys at Sendean had warned me my camera was in need of a service, having never been calibrated to take alkaline rather than mercury batteries. And unfortunately much of the garden footage did come out rather murky and dull.

The more successful shots are those looking over the trees and bushes to the buildings surrounding the garden walls – the stronger lines of the architecture lend some structure and definition to the frame. I’ve been thinking to use these clips to make a new ‘bubble’ installation, one that might be a sequel to my 2009 piece Fedora, which also explored ideas of shifting cities.

The footage of course has that very specific 8mm quality, which I’m not entirely sure how to deal with. I love the grainy-ness and the imprecision of the wavering image. But I’m not aiming to create a wistful or nostalgic piece, or one that has anything to do with home movies or obsolete technologies. So why use the film stock? It’s certainly not the easiest or most economical choice. One reason might be to try and capture this sense of ‘otherness’ that is characteristic of the garden. The unreality, the artificiality, the imaginary nature of the space. The film footage has a far-away, nebulous quality so unlike the close-up-super-HD-clarity of the digital image world.

A construction vehicle driving past seems incongruous in this far-away space, gives a jolt – disrupts the apparent softness of the scene as a reminder of the actuality of the city. 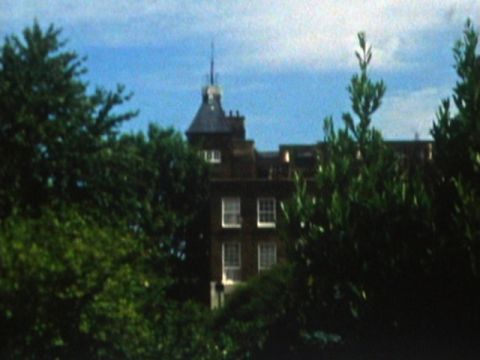 After what felt like a long time away, I visited Culpeper the other day to take a new batch of 35mm slides. It certainly feels autumnal now: bright and blustery, the colours are changing to darker greens, reds, oranges. Berries were falling around me as I walked under the canopies (it was a particularly windy afternoon) and the paths were littered with leaves.

I tried to explore a new area of the garden this time – the southwest corner near the compost heap – but I was quite uncertain as to what to shoot. I’ve been photographing in a rather haphazard, random way so far – simply responding to what I’m seeing/finding, capturing ‘little moments’ in a stop-start kind of way, without thinking ahead to how sequences will come together on a timeline. I realised I needed to look back over the images and shots I’ve already collated, to consider the sequences and patterns that are starting to form. I went back to Final Cut Pro and exported a rough edit of just over a minute’s worth of scanned photographs. I set it playing in a continuous loop on my desktop and wrote some notes:

*Walking around, changes announced by the soundtrack
*Black spaces can be useful – pauses
*Difference between slow and fast sequences is like the difference between walking and running?
*Would be nice to see/hear different weather conditions – rain
*Pathways and walking – navigating the space, exploring
*Close-up explorations
*The dark (underexposed) section looks like twilight and gives a very different feeling

This sense of walking is something I’d like to investigate further. And the differences between stopping to look and being on the move. 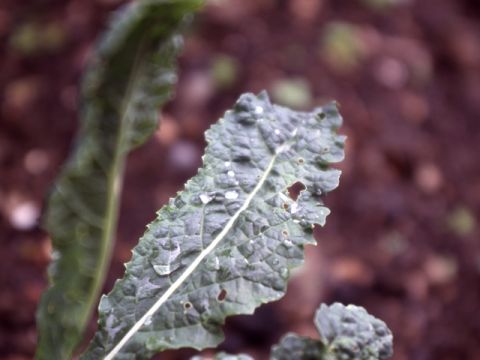