A selection of a dozen photographs showing boarded up cash machines. Large, close up, heavily cropped and completely out of context; they could almost be abstract paintings. The exhibition is part of the Photo Fringe 2008, which runs alongside the third Brighton Photo Biennial.

Grey Area is beneath a cheque clearance shop, which seems fitting and is close to the station which is convenient.

Last week I took the cash machine pictures to a folio forum in the Photographers Gallery, London. You are expected to project a few images, then give a ten minute talk about the work, presenting any questions, doubts or queries you might have. A great opportunity to show the work in a different environment and to a group of peers and experts; about sixty people were there.

I asked how people thought I could develop the project, even should I continue the project now that the confidence in the credit and banking industry had completely collapsed? Perhaps the job was done.

Apart from a brief diversion when the discussion went off down a ‘is it documentary or is it conceptual?’ debate a choice selection of options came up. Group shows and artist run galleries seemed to be to the fore. My fears that I was being pitched into a lion’s den of fstops and camera nerds were unfounded. Everyone was encouraging. I’d recommend that anyone working with photographic imagery should consider it as a very useful showcase, a widening of the conversation.

Several people have mentioned that the cash machine photographs are reminiscent of a form of contemporary archaeology. There is an amusing story of a study group analysing the stratified remains left in the back of a Student Union minibus. I hadn’t thought of this myself, though the concept of documenting something, unselfconsciously, over a long period of time, like time-lapse, I do enjoy. This process could be seen as a form of geological study using photographic records and ongoing time, rather than groping about many centuries in the past. A New Wave of Archaeology studying what is around us now, or documenting what has just been lost whilst it is still warm in the popular memory. Double flip, could this concept be taken into future time? 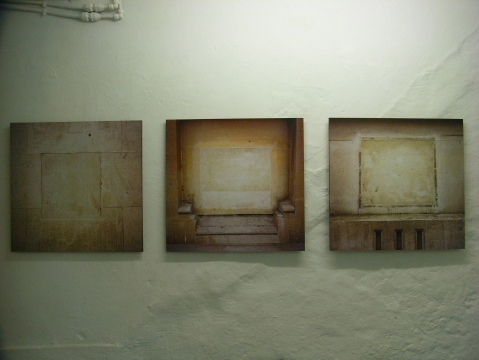 Around the area that I live I have noticed a few artistic responses to the evaporation of banking confidence. ‘Six weeks that shook the world’, the effect of my exhibition has been far more widespread than I expected.

‘I STOLE YOUR MONEY’ is a small poster that has been pasted on walls, telephone boxes and in this case the post box at the end of my road. Instant and succinct.

Even though I looked at the windows and behind the front door of the alternative cafes and usual dumping spots for political flyers, I could only find a single copy of the ‘Never Mind the Bankers……..’ flyer. This was a bit of a mystery. I thought it would be popular, flyers everywhere, but nobody knew anything about it. One thing I did notice was how the spots for distributing unauthorised publicity are now very limited. Around here it is even illegal to give out flyers on the street. It was raining very heavily on the afternoon of the march. I was working so I couldn’t go. But there were no reports in the national press, no comments on the news, nothing in the Argus.

The picture of the Lehmans mug is from the front page of the Art Newspaper, given away free at all the art fairs in London, a couple of weeks ago. It is a actually a photograph of a painting, ‘Pintura Actualidad’ produced in instant response to the credit crunch by Jorge Diezma, on sale at the Zoo Art fair for $1500.

I also had the good fortune whilst I was in Paris to be staying in the delicious Montmartre Studios, live/work spaces for artists build by the city council in the thirties.

More exciting. The building is on Rue Ordener, almost directly opposite the site of the first motorised hold-up. This happened in 1911, and was carried out by the notorious Bonnot Gang. According to the guide book it was a meticulously planned raid. As well as being hardcore anarchists the gang had a reputation for being sharp dressers and doing things with style. The previous week they had stolen a Delaunay-Belleville limousine from the home of a top industrialist. This type of car was the one favoured by the French President and the Czar, and was capable of speeds up to 125mph, this at a time when police cars had a maximum of 23mph.

On the morning of the robbery, after the gang had sat outside the branch of the Société Générale for an hour the uniformed messenger finally turned up to deliver the banks daily cash and correspondence. Before he could go inside two members of the gang wrestled him and his bodyguard to the ground, shooting him twice in the chest before he was relieved of his briefcase. The get-away vehicle fled north before any of the general public or police could give chase. The aim was to ditch the car over a cliff near Le Havre, but they got lost, ending up on the beach in Dieppe. Nevertheless they calmly caught the train back into Paris. The briefcase contained only 4000 francs in cash, it was mainly bonds. What they did get was an international reputation and a place in the history books.

For the full story and all the politics; The Bonnot Gang by Richard Parry published by Rebel Press. It is an excellent read.

I’ve just come across the brochure for L’Argent, an exhibition of money related art that I visited in Paris during the summer. Pure coincidence, it was useful to see just before showing the cash machine photographs. Most of the pieces on show at Le Plateau were at least fifteen years old, and they did have a Duran Duran Smash Hits old school feel to them. Makes me realize that the bulk of art that involves a political charge is inevitably ephemeral.

There were early works by a lot of celebrated artists including Thomas Hirschhorn, Orlan, General Idea, Felix Gonzalez-Torres et al. Mostly wry comments or critiques of the nature of money; the dominant hold economics has over us all. Sophie Calle had still images from her video of peoples facial expressions and body language when withdrawing money from cash machines. Interesting contemporary portraiture.

By far the most enjoyable and provoking piece was a ten minute video work by Fikret Atay, Rebels of the Dance made in 2002. Two lads, egged on and ridiculed by their mates out of picture, perform a self-conscious dance either side of a cash machine that is located inside a banking hall. The situation is one anyone who uses a cash card must have experienced, loitering youth. For me it illustrates the irony that banks can provide unquestioned 24hour, heated drop in facilities, whilst those without are moved on, forced to seek shelter at bus stops or behind blustery bits of fencing. 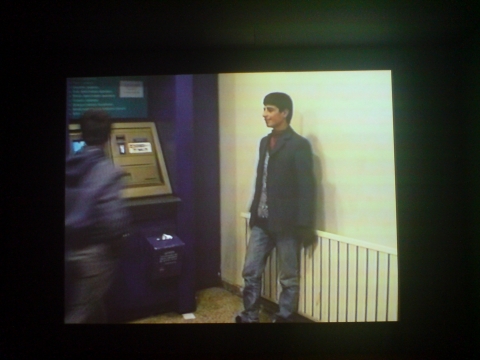