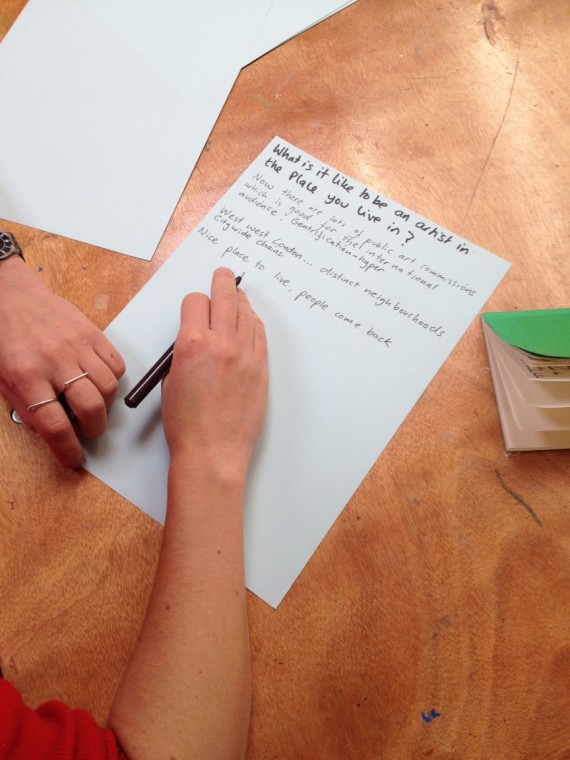 Jamboree provided me with a good knowledge on how people and places operate outside my area. I lived in Manchester for a few years and only recently I started feeling like I belong. As part of one Jamboree session I was invited to think more thoroughly about living and practising in the city as an artist and what that entails. I immediately imagined a psychogeographical tour around Manchester. I imagined the people and the places forming a drawing that followed my own journey of connecting to the place. The drawing would map out my involvement with Corridor8 and FACT followed by my Rogue studio neighbours that formed Film Material Soup, the Life and Use of Books and then HOME, seeing how all these people and places took the role connectors that would each form different trajectories.

This cartographical drawing also gave me a sense of movement, and I thought of the urban exploration one would take when encountering a city with novel eyes, and what strategies there are in place. In Martin Clark’s session as part of Jamboree, he talked about place and locality and during the talk there was a beautiful extract from Lucy R. Lippard’s The Lure of Local which might provide interesting ground for discussion. The talk was oriented towards place and belonging and there was a mention of the feel of responsibility towards the place you live in, which stuck with me and I felt it was related to my own progression in the city. In my case, things changed when I started feeling more responsible towards the place and connecting with people and spaces created an interconnected web of possibilities that inherently pushed my practice in a different way.

Overall I really enjoyed Jamboree and I think everyone’s journey is different. For any newcomer looking to learn about the place and even Manchester I would recommend a serendipitous walk around the city, as the one led by Morag Rose as part of the Loiterers Resistance Movement, the collective of urban explorers: “Look around you and there’s magic!”

Manchester-based Clara Casian has a practice that encompasses film, drawing and collaboration, working with a variety of media including performance, moving image, sound and light. Clara often works on durational projects that re-construct narratives and that employ seriality and repetition, developing gradually through an accumulation of events, sites and objects. Clara is currently researching Northern UK publishing and censorship and the playful combinations of text and image in unclassifiable ‘speculative Sci-Fi’ anthologies from the early 60’s and 70’s via the history of Savoy Books. She completed her Masters at Manchester School of Art and her work includes research in the digital field and collaborations with artists, makers and collectives.
http://filmmaterial.org/artists/clara-casian/
@ClaraCasian

Place shapes but it doesn’t have to define, reports Beth Kettel 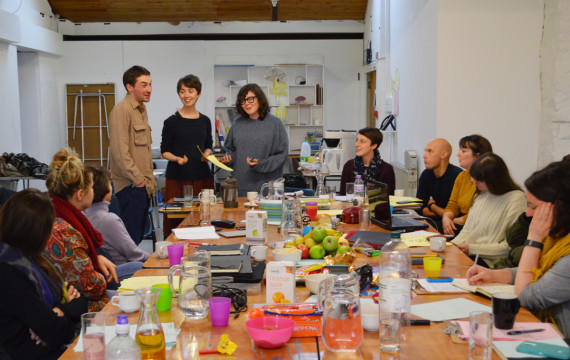 Being in a situation to meet other young artists from around the UK seems simple but actually the opportunities to do that are quite rare, especially in this kind of focused environment. Because of the intensity of the weekend it meant that we really did form friendships/‘connections’ with other practicing artists working regionally across the UK and I would say for me that’s the main thing I took away. When a bunch of artists from around the UK have the opportunity to come together like they did in Plymouth, it made it clear that we were all up for supporting each other, soppy yeah but it didn’t feel false, or like a ‘networking’ event.

It’s quite easy not to properly consider the effect of location as an artist, I mean you think about position and positioning within the wider artistic vocabulary but it was really useful to think about the regions as things in themselves, not separate pockets outside of London, nor as trying to recreate a centre, but how these pockets can be connected and supportive. And perhaps how working in the regions almost offers a different license; a certain freedom. I do however think as far as the weekend in Plymouth was concerned, we needed more time to really establish how these connections between cities could be strengthened and sustained. Because of what was set up over the time in Plymouth I think it would be useful to reconvene, not starting from the start again but have a second round of focused discussion.

I am between cities and don’t necessarily think it’s that relevant for me to be based in one place in particular. Obviously I want to fully engage with the place I’m in and I want to promote the good stuff that’s happening there but I guess it seems less relevant for me to hold up a flag. Place probably does affect the work you make and I don’t know if I’m happy for a place to define what I do, so moving forward, I will certainly give this more thought.

There was a lot on the agenda for the weekend and quite big concerns to try to deal with, which I‘m not sure really got concentrated to a point of resolution, but for a few days I don’t know how realistic that was anyway. It certainly felt like the start of something, something that needs to be continued. Although it didn’t feel like some of the concerns were established, what was established were connections between people and getting an idea for the arts ecology of different cities and how things operate differently within them, useful to reflect back on the city where I’m based, thinking about what could be improved but also what is to be appreciated.

Beth Kettel is an artist currently living and working in Nottingham, she has a studio at Primary and is an associate of Castlefield Gallery, Manchester and Eastside Projects, Birmingham. Recent shows include Gooch, a performance for Sluice Art Fair 2015, London; Post-Point and/or The Sequential Tangential Potential, solo at The Telfer Gallery in Glasgow. Kettel tends to work with text, performance, installation, costume and video. She tends to her mixed feelings and interest in the flexibility, polysemy and obscurity of language, gesture and object.
bethkettel.co.uk
@BethKettel

Crack on! Emma Sumner gets down to business 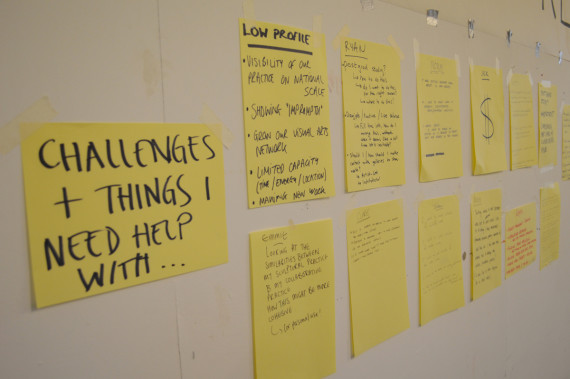 Outcomes from the ‘what’s next’ task led by LOW PROFILE

I felt I was taking away other people’s concerns from the session which I now want take forward as future article topics conducting research and interviewing various experts and experienced arts professionals to provide real solutions to the issues faced by artists.

Mottos  – Crack On! – As a pragmatic person, although I understand the importance of discussing the issues we all face as artists, I often feel frustrated that the action to happen following these conversations takes time to really make a difference which is why I live by the motto ‘Crack On!’.  I’m determined to make a difference and help promote change through action.

Emma Sumner is an Artist, Curator and Writer living and working in North West England.  Working with the motivation that the small actions we take can help make a big difference to the world around us, Emma’s complex and decorative practice explores Western consumer traits, focusing on fast-fashion and the consumer’s persistent desire to buy better, newer and more luxury products. Often describing herself as a contemporary Womble, Emma avoids becoming part of the consumer cycle, only occasionally investing in quality items to keep, making use of other people’s donations and scavenging second hand stores. This lifestyle choice leads Emma to create projects which extend into her everyday life, including the creation of her own fashion label, establishing a community market stall and working with artisan designers in India.
http://www.emmasumner.com/
@emmasumnerart