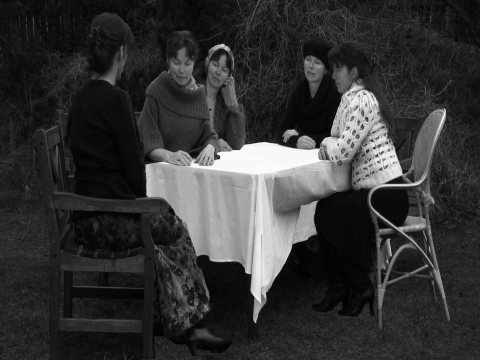 As my working methods are very much based on research, much of my residency was used for this purpose and it is first now I have returned to London that I have had time to start editing my other result from the Jeckels Foundation Residency.

It is a short video picture which initially was supposed to be based on a artist party from a well known painting from the area but in a winter setting with local artists from the area but ended up being called The Crisis Meeting and being inspired by the difficulties I found in trying to collaborate with the other artists and the curators at the local art museum in the area as well as a heafty dose of the Credit Crunch and its effects on artists in the comming year. Hence I ended up posing for all the parts.

So my piece is quite start in its outlook and hence the HD video is in greys.

It was also inspired by a book of local photographs taken at and around the historic Jeckels Hotel in the late 19th and early 20 th century, which was where I stayed in a hotel flat with an adjacent studio.

My present practice is mainly informed by spirituality encompassing iconography and influenced by philosophy and theory, which responds to specific areas, traditions and cultures, questioning of moral and social values and sometimes a sense of the irony in the ridiculous.I mainly work in artist video, performance, sculpture and installation. Recently a bridge has formed between all my disciplines which explore the notion of mediated presence and allow me to investigate the gaze and different ways of involving an audience.