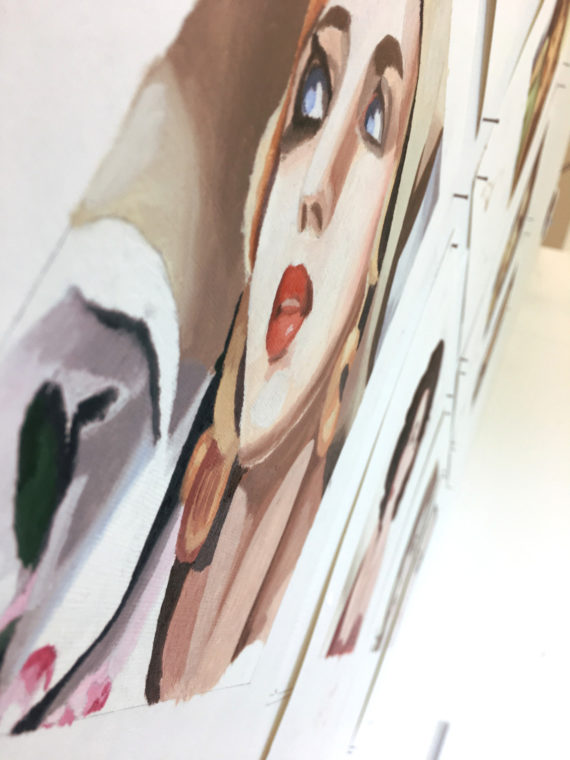 When it comes to static interaction, I think that this painting is quite effective. The presiding aspects of this type of interaction are narrative, and emotional effect.

I believe that this image shows narrative, as the viewer wonders why the man is stumbling, and where this is happening, and who he is.

Is he drunk, as the glasses of red and yellow liquid might suggest, or has he been struck by some opposing force? Either way, the viewer probably relates to the man in the red suit in some sort of emotional way. 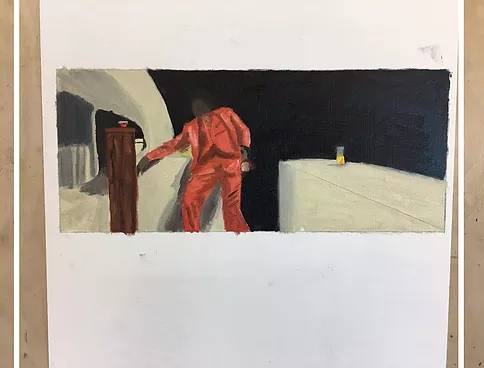 So, before I had started work on any of my paintings, I had an idea.

This idea was closely linked to the theme of my dissertation ‘The Sublime’.

The Creeping Terror Idea (Not Used)

There is a thing that a viewer might notice when looking at some common places, such as hallways, alleyways and and deserted places that are usually packed with people, and that is a strong sense of terror that is almost indiscernible in its origin, I call that ‘Creeping Terror’, because it materializes slowly, and builds the longer you view it. 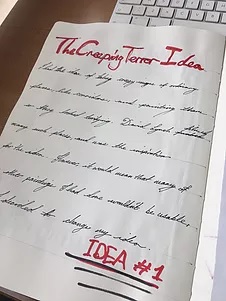 My idea was to take the concept of ‘Creeping Terror’, and put it in a painting. By taking images that I found gave the same feeling, and painting them, I hoped that I could transfer my feelings about them to the viewer.

However, this idea didn’t take off for a few reasons.

The first reason, and more important one, was that I had another idea which was similar, but was more relatable to a larger audience.

The second reason was time, if I spent a long time on the seven or so paintings I had planned, and I found that they had lost the ‘Creeping Terror’ in my rendition of them, then I would be left with very dull paintings of things like hallways and public toilets, without the benefit of time to make them better. 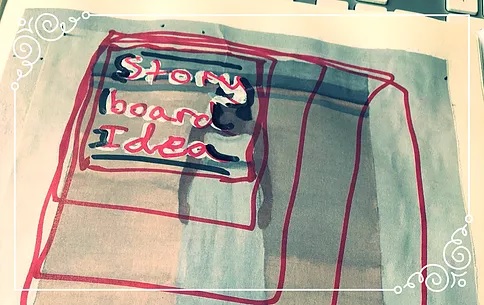 This idea stemmed from a childhood addiction to comic books.

When I was younger I used to love Spider-man strips, the aesthetics of each image captivated my imagination just as much as the story absorbed me into another world.

Recently I have found myself watching a lot of thriller/crime movies, and found that some of them have these thing called ‘storyboards’ that remind me a lot of the comic books of my youth.

I really liked these movie strips, and wanted to do something with them.

So I started painting a few of them as mock ups, and then suddenly realized with the help of my tutors, that I could use these mock ups as the final images. By putting them up a lot like Cathy Lomax’s exhibitions, I could definitely create something with a strong impact and mass appeal. Many people have seen comics in their past, and therefore it has an emotional nostalgic value, and it tells a narrative as well, which are the two main aspects you need for Static Interaction.

‘The first question we should ask ourselves when looking at a work of art is: – Does it give me the chance to exist in front of it, or, on the contrary, does it deny me as a subject, refusing the consider the Other in its structure?’

With paintings it is extremely hard to include the viewer in the art apart from in the typical spectator format, and it’s important that that those that view my work think of it as more than just a set of paintings, and see it more as a puzzle to solve.

‘Relational art (an art taking as its theoretical horizon the realm of human interactions and its social context, rather than the assertion of an independant and private symbolic space)’

So I have come up with a few ideas to make my work ‘Relational Art’, so that people interact with the work instead of just viewing it.

I was thinking of making a tally sheet where people can mark down who they think is the villain in the narrative, or something similar to that.

I was also thinking of adding a moving light that moves from painting to painting, or a set of headphones playing soundbites from each of the movies that I have used for the images.

I haven’t completely decided which of the interactive ideas I will use yet, but I am almost certain that I am going to paint the wall behind them black, so that they look even more like storyboards for the movies.

I’m planning on painting around 2-3 more paintings for the grid before I try out a few of my presentation ideas for the show. Hopefully I’ll finish them soon so that I can get on with it.

The Pink Pig & Taking a Glance

This painting is a lot like ‘The Coffee’ in the way that it was painted. I covered the majority of the painting with a light brown imprimatura, and then got to work on the pools basin, after that I got to work on the grey floor, and diving board. After that was the clothes, skin, hair, bottle, and paper pig.

If I had to paint this image again, i think that I would have spent more time on the lines so that they looked crisper, and not as bloated in areas. 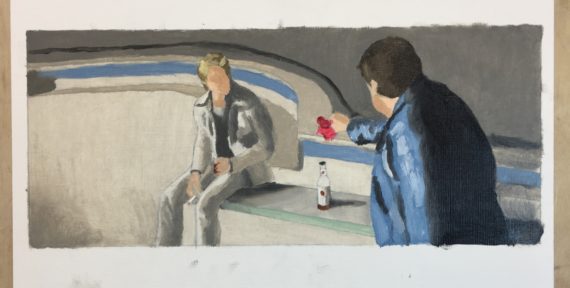 This painting also reminds me of Luc Tuymans work, not in the way it is painted, but in the subject matter.

Luc Tuymans said that for him media such as films are as much a part of him as his own experiences, because he finds it hard to differentiate between his memories of real life, and film.

When I look at this painting it reminds me of the time that I spent in South Africa playing in the pool.

This painting is a lot like the previous one in that it has an extremely bright focal point, and the same colour palette.

I really like the composition in this one, it makes me wonder what is going on. 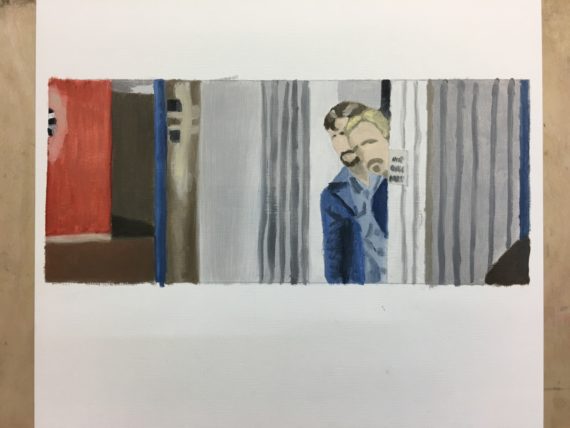 If I had to repaint this image then I think I would have spent more time on the border, I think if it were completely smooth, then I it would pop a lot more. However, that is the only thing that I would improve.

I really like how it seems that they are looking at the viewer.

I think that this picture along with ‘The Pink Pig’, will help create Static Interaction, and improve the narrative of the collection.

I think that I’ll do a post about my plans for the Degree show next. I’m not sure. I might do one about my next paintings instead.. 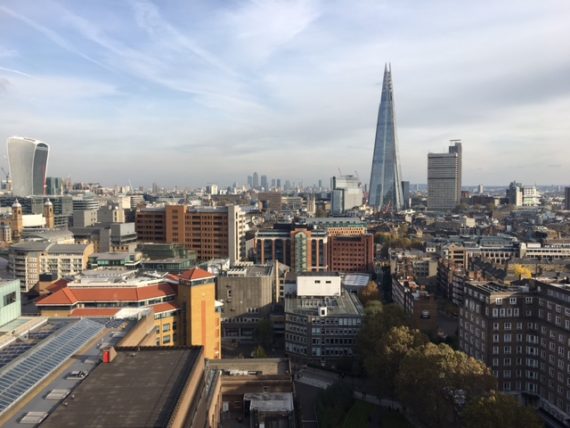 On the 3rd of November 2016, a few friends and I went to see the Antony Gormley exhibition in the White Cube, we looked around and found that it was quite interesting. The main attraction was the human tunnel, and walking through it into complete darkness. Sadly I neglected to take a video of it, or a picture. 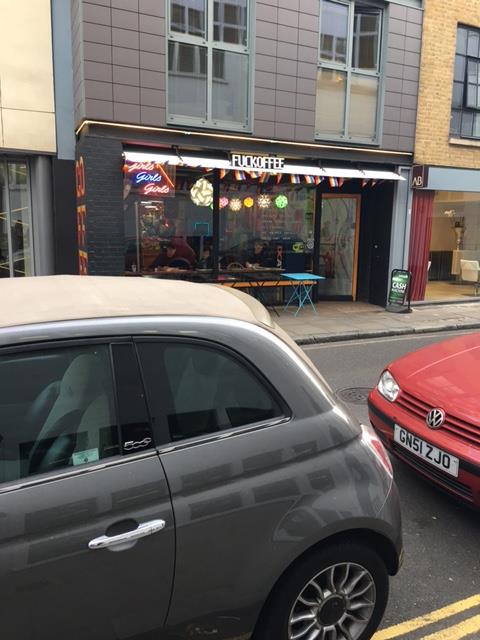 After leaving ‘White Cube’, we came across a cafe called Fuckoffee, we had something to eat and drink there, and then set off for the Tate, and spent the rest of the day there and around Liverpool Street, all in all it was a good day but we didn’t accomplish as much as we wanted.

It was surprisingly tiring.

The Contract & The Coffee

In the Contract I tried adding more intense colours for juxtaposition and for use as focal points. By adding colours that draw the eye, the viewer will see those aspects first, and then their attention will drift to what you want them to see later.

I thought that the best way to create this effect was to lay down these colours using impasto in order to make them pop out a little more than the other areas. I think that it worked, however, I also think that I used too much, and therefore the painting became unbalanced in a way that I didn’t want it to. Therefore I think that in the future I wont use as much colour that is so jarring to the palette.

Impasto is a technique of painting usually used to convey an expressiveness in work, and is done by using paint thickly on a surface to create a very intense feeling. 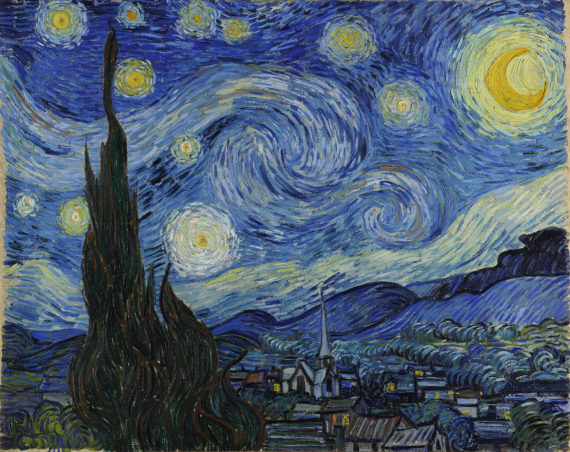 I started the painting by covering the space in imprimatura using the light brown colour of the sky. I then got to work on the background, clothing, hair, and finally the skin. 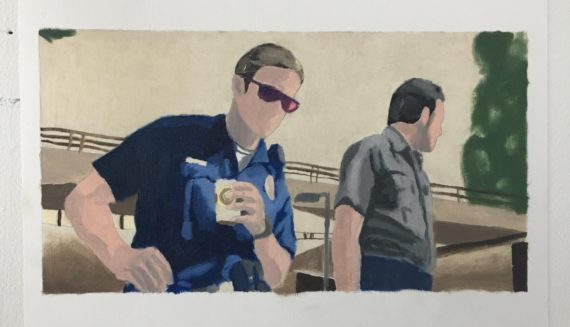 I think that the impasto of the sunglasses worked well with the purple/red hue, that stood out against the rest of the painting and gave it a focal point.

In terms of static interaction, I think that it has a narrative by itself, and when combined with the other paintings I have done it will promote an emotional response.

Imprimatura is an Italian term and literally means the ‘first paint layer’, and refers to a transparent coating of colour over a painting that provides a toned base for the following layers of colour, and allows the painter to achieve an effect that would be extremely hard to obtain otherwise.

In other words, it is an initial wash of colour that allows the painter to start with an background that reflects their painting better.

Plans for the future

In the next few paintings I am going to try and take what I have learned, and improve upon it. I like this paint palette and I am going to continue using it for a while.

The View & The Relationship

I really like how ‘The View’ turned out. The contrast between the darkness of the room, the colour of the jacket, and the brightness of the outside world, really enhances the effect of chiaroscuro in this painting. 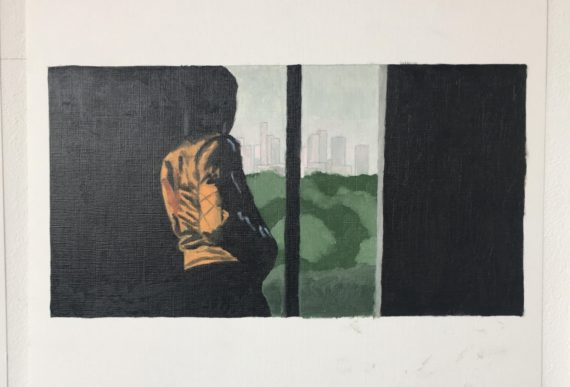 This painting definitely tells a narrative, and can evoke an emotional response, so it has the necessary requirements of becoming a ‘Static Interaction’ painting, and I think that when it is combined with the rest of the paintings in some form of strip/storyboard, then the effect will be intensified greatly.

Chiaroscuro is a painting technique that originated during the renaissance, it’s purpose is to model three-dimensional forms in a dramatic way by using strong contrast between dark and light, this is usually achieved by casting a single light on an object in a dark room. 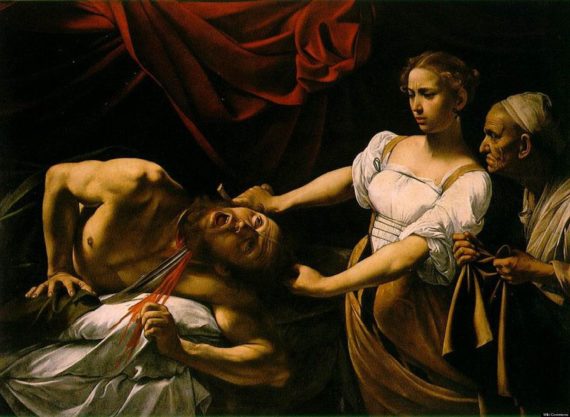 This painting by Caravaggio is a perfect example. If you analyse the painting, you’ll find that the entire scene is lit up by what seems like one light source, this allows for a strong juxtaposition of extremely well lit areas, and shaded areas, which is far easier to paint as well as more dramatic than more graduated shade and light areas.

This painting highlighted some areas of concern for me in obscuring the face. I really like the palette and the composition of the painting, however, there is one aspect of the painting that keeps me from enjoying it, and that is the large rendition of the lady’s face at the left. 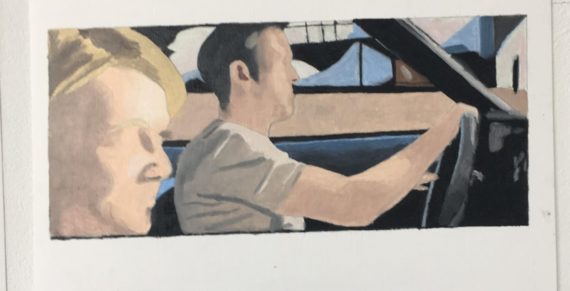 I think that the human body’s ability to analyse a face is extremely developed, and therefore a face without features really jars that fundamental ability, and unnerves the viewer. I don’t think that in other cases in painting it has mattered so much as the face has either been much smaller, or shrouded in darkness, and is therefore more tolerable. While this unnerving effect has its merits, I feel that it isn’t what I am looking for in my painting at the moment, and therefore in the future, I am going to try and keep the face smaller in my compositions so that this isn’t replicated.

In terms of ‘Static Interaction’ however, I think this painting is a lot like ‘The View’, and I believe that viewing it in a large storyboard of sorts will make it much more effective.

In my next few paintings, I will try to rectify this facial feature problem, while also improving my palette and composition.