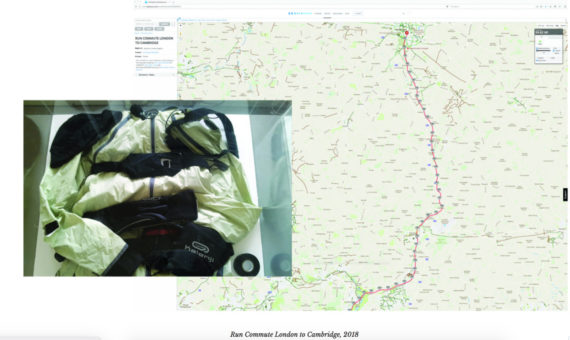 Feeling exhausted after the longest run yet at about 20 miles, amazingly I arrived around the same time as before,

The day started with the worst weather imaginable: tipping down with rain, a high wind and a chill in the air. Resolute to the task in hand, I boldly set off across a field to join the river path along the Stort, towards Bishop’s Stortford. Due to the field being waterlogged in many parts, my feet were soaked in minutes. The going was slow and precarious as the path was very muddy (despite wearing trail shoes, they weren’t really up to the task). As I approached Bishop’s Stortford the rain had eased off and I took a shorter route via a small lane that ran closer to the railway line and brought me into the town, close to the station.

From there I was able to follow a footpath through a park near the Castle Gardens. This carried on for quite  while, following the railway line quite closely, through other fields and open land. A sign told me I was on a public footpath called the Hertfordshire Way (or at least part of it), which is apparently a circular route within the county of some 195 miles, The section I took was pretty handy as it took me off road for quite a while and would have continued further, had a whole section not been closed off due to ‘re-landscaping’. It really annoys me that they feel they have to close it off and deny access to do something that is probably completely unnecessary.

This left no option but to take the busy B1383, which I had tried to avoid. At least there was a pavement and it was a pretty straight run to Stansted Mountfitchet. There, I thought I could cut across some fields near the Castle gardens and Toy Museum, which were closed. I managed to disappear into some woods at the end of the station car park and clamber over a wire fence. So far, so good… As I made my way across I noticed a couple of people wearing orange vests and another guy in the distance. As I headed over towards them I had already decided I would say i was lost if they asked what I was doing. As it was, only the other guy headed towards me and he seemed friendly enough. He said that actually, there was another path the other side of the railway that went right alongside it and that was my best bet or to head up to the B road. I decided on the quickest option, which unfortunately, was the road and made my way up the side of the field. At least it ws going in the right direction.Although it was not as close to the railway, as I would had liked, it got me to Elsenham relatively quickly. At about 10 miles, it was my halfway stage.

I crossed at the station crossing and a small B road took me close to the railway on the other side. there were a few opportunities cross to the other side, but they were unknown quantities, so I decided against them. I’m finding that I’m having to weigh up preserving my energy and running on faster more direct roads and taking risks and maybe having to turn back and make longer detours.

That said, I’m really struggling this evening now with completing this post. Exhaustion has got the better of me and I’m going to have to pause this for now- I can barely type and my nose is streaming. I need to have a good night’s sleep ahead of tomorrow’s final leg, and I still need to do a final check of a possible route…

Adding to this now retrospectively, having completed the run (more about that in the next post). I clearly hit a wall of extreme tiredness above when I had to temporarily abandon it.  I’ll try to continue from here.

The road to Newport was a small B road that followed the railway and the trajectory of the river Cam pretty much all the way. I am finding that this journey is becoming one that follows the waterways as much as it does the railway. A sit down on the bridge at the station allowed me a moment of brief recuperation before I was on my way again for the final stretch to Audley End and Littlebury, my stop for the night. Part of the route took me a little further away from the railway than I would have liked but it was worth it to see the spectacular view of Audey End House just before the home straight into Littlebury.

Amazed that this was my longest stretch yet at about 20 miles and yet I arrived at around the same time as the previous day when I had run 4 mils less. No wonder I was exhausted! Thanks to everyone who boosted my morale by regularly posting messages on the locatoweb site.