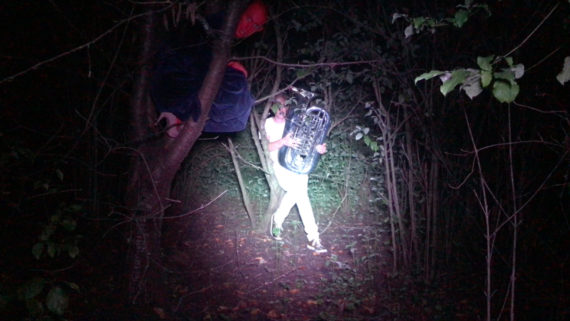 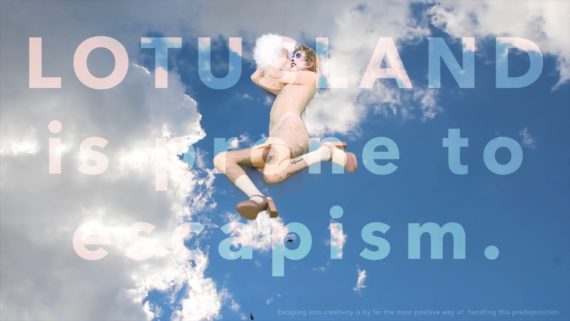 We would like to introduce our project, LOTUSLAND, and its  founding artists’ Philip Cornett and Paul Kindersley.

The LOTUSLAND project and collaborative unit is a site of enquiry regarding queerness.  Founded in 2015 to explore queer world building and the assimilation of queer culture, LOTUSLAND has been exhibited in Cambridge, Belgium, and London.  LOTUSLAND was initially inspired by artist Jack Smith and his DIY aesthetic in his durational performances in his NYC apartment. Smith’s movies (ie- ‘Flaming Creatures’) led him to become the ‘Daddy’ of queer film and performance art. LOTUSLAND gained its name through Smith’s manifesto-like writing entitled ‘THE CAPITALISM OF LOTUSLAND’:

Could art be useful? …art must not be used anymore as another elaborate means of fleeing from thinking because of the multiplying amount of information each person needs to process in order to come to any kind of decision about what kind of planet one wants to live on before business, religion, and government succeed in blowing it out of the solar system. Let art continue to be entertaining, escapist, stunning, glamorous, and NATURALISTIC – but let it also be loaded with information worked into the vapid plots of, for instance, movies. (1997, p11)

Along with exhibiting installations, producing performance and video work, we curate live queer events, and invite other artists to produce work and play with us, which enables them to explore their own artistic practice.

Always envisaged as a largely collaborative performance orientated improvisational journey, our most recent iteration funded by the Arts Council, LOTUSLAND ESTATES,  started its journey as a literal representation of Estate Agents for artists.  It was exciting to see how the core group evolved into facilitators for artists to collaborate with us, allowing the public to engage with the possibilities a creative space can generate.

LOTUSLAND ESTATES delivered an exciting and varied series of events and collaborations that exceeded our expectations over 23 days.  We collaborated with over 15 local and national artists; workshopped with youth groups such as Circuit Cambridge; additionally we worked with university groups from two local institutions: Cambridge School of Art (CSA) and Cambridge School of Visual and Performing Arts (CSVPA). Our reach included visitors from age 2 to age 90 who all engaged and joined in in the art dialogue and creation. Many of these relationships will now go on to inform our practices and forge new creative partnerships. The project was also featured on BBC Radio Cambridgeshire as well as BBC Look East (West).

Throughout our LOTUSLAND projects, we have managed to introduce disparate communities to each other and facilitate a space where different people can work creatively together and learn from each other in a free, non-judgemental environment. We had sound artists, puppeteers, painters, performers, food artists, researchers, non-artists, academics, etc all working alongside and cross-pollinating with exciting ideas. It also brought a much desired lightness to the issue of the importance of creative spaces in urban planning and new developments, which is a pressing issue facing many artists both in Cambridge and nationwide.

Hoberman, J. and Leffingwell, E. eds., 1997. Wait For Me at the Bottom of the Pool : The Writings of Jack Smith. London: Serpent’s Tail.

Here you can view all the images we created from the LOTUSAND : THE MUSICAL movie that we produced with support from the a-n professional development bursary. 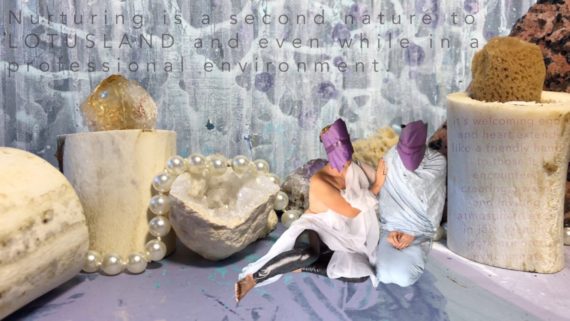 We are looking to share our journey, and collaborative process with students, and members of the public, as we feel the element of collaborative play within contemporary art is an area that has been marginalised.  We are open to hosting workshops, creating site-specific work on site within your institution, presenting our project and its contextual frameworks, and/or screening past work with a Q&A. 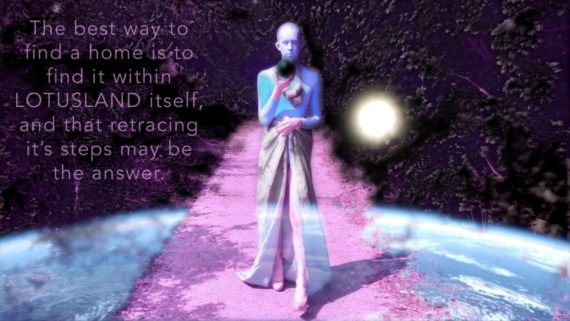 LOTUSLAND FUTURE
From this developmental period of reflection, exploration and discussion, we are currently in the beginnings of designing an augmented reality app for LOTUSLAND. Alongside Karen Eng, a long time collaborator and supporter of LOTUSLAND, we have been in discussions with Yana Buhrer Tavanier, (co-founder/director of Fine Acts, TED Fellow, and Fellow at the Royal Society of Arts) as well as Wedge Martin, (technologist, entrepreneur and CEO of GeoPapayrus) to re-develop the GeoPapayrus app, or build a new one, to enable artists to reclaim monetised/corporate space through digital interventions using video, sound and still image.  They enthusiastically support our idea, and wish to encourage further development of this idea, with hopes of future involvement within their organisations.

Initially we would develop the app using pre-existing content made through the various LOTUSLAND happenings throughout Cambridge, Wysing Arts Centre, and London. This would allow us to adapt the app so that it would be user friendly.  The aim would be to share the app as a social platform to access particular projects, but also enable artists to create their own spaces within spaces they create themselves. It is very much in line with the idea of geo-cacheing, but celebrating queer, digital content.

In cities such as Cambridge, where space is very limited, difficult to access, and expensive, the LOTUSLAND app would enable an artist to ‘install’ their work wherever they wished.  For example, LOTUSLAND ESTATES explored estate agencies, and the ideal creative space, so with the app, we could place our videos in the windows of every estate agent in Cambridge, turning the bland, beige city into something a lot more queer.

LOTUSLAND’s work resides within multiple queer frameworks, and to use both urban and rural locations throughout Cambridge and London, would enable a visibility within spaces that seem to actively reject such queerness.

We hope the LOTUSLAND app will empower artists to make their work visible in any location regardless of any bureaucratic or financial limitation.  Whether they are site-specific responses using digital animations produced over various gaming platforms, moving image interventions, curated shows, audio/visual graffiti, etc., their audience would be encouraged to be inquisitive and explore spaces they feel exclude them.  And ideally with technology that is user-friendly and accessible. 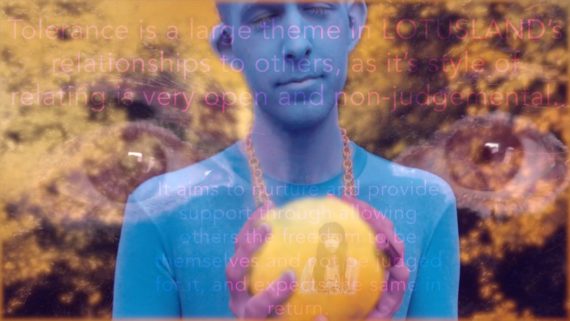 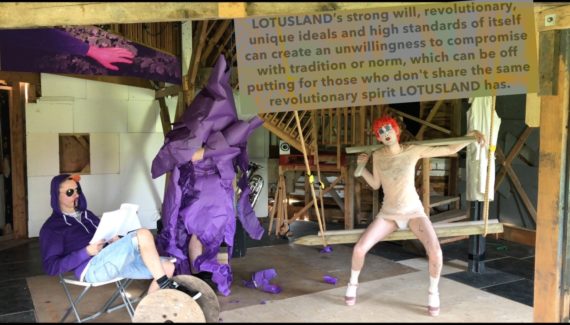 LOTUSLAND : THE MUSICAL
We began our selection process, finding a handful of videos with the most in-depth narratives and characters. We then framed them within this ‘Professional Development’ process, creating a John Dee style oracle that embodied the need to look into the future, to understand LOTUSLAND and what is out of our control. The main character, Rosey Stoner, starts off as an isolated creative entity, who dreams of the world outside, and yearns to develop through external validation. They are unaware of what they are, and their power within – they are our rosetta stone, that they are the key to their own deeper understanding of their mode of operation.

We continued the filming over the week and invited artist, Mark Scott Wood of OUTPOST (Norwich), who became part of the film along with Norwich-based filmmaker, Sam Tring.   We then created a mummers-influenced play using scripts from our past work. Completely improvised, this three act play documented Rosey Stoner’s journey outside their isolated creative space into an urban landscape, where they are full of enthusiasm, taken advantage of by a ‘corporate piggy’, but in the end triumphs over their exploitation becoming professionally developed and self-sufficient. Mark and Sam’s involvement directly progressed this part of the production, allowing our professional relationships to become stronger in what could have been viewed as an alternative corporate team building activity.

We then took our week worth of footage and edited what is now titled LOTUSLAND : THE MUSICAL, bringing together the documentation of  our development as a collaborative production unit. 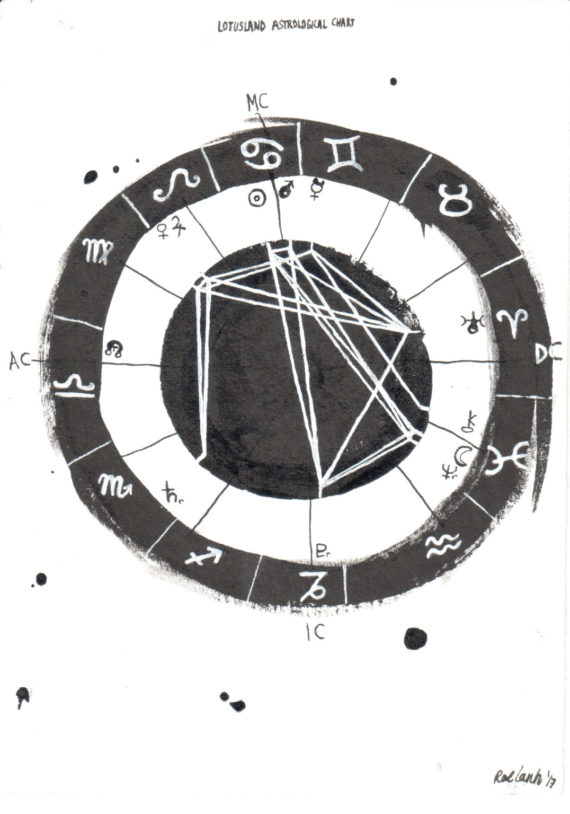 In August 2017, we had the privilege, funded by an a-n professional development bursary, to spend a week at Philip’s studio at Wysing Arts Centre to try to gain a deeper understanding of how we function as an ‘institution’/collaborative group.

Initially, we commissioned an astrological chart based on LOTUSLAND’s date, time, and place of origin from artist/illustrator/astrologer Rae Lahn. This was one of the most useful tools of the developmental period. It enabled us to compare our perception of LOTUSLAND with its astrological aspects, which in time began to widen and deepen our understanding of the project.  When we began filming and creating LOTUSLAND THE MUSICAL, we also used excerpts of the text from the projects profile were used as script within the film and the digital video stills posted throughout this blog.  Part visual manifesto, part motivational, part self-help, part-zine; these phrases from the astrological reading put into context how our project views itself, works with others and its ideal location.

We began our focused week of development with artist, Lucy Steggals, of the Saturday Museum, where we came to the decision that LOTUSLAND’s (professional) development comes through our collaborative production, where further  production decisions are also guided by the space – the place – not particularly the institution, but the actual place itself.  Our discussions continued to uncover that LOTUSLAND wants to be seen while it creates, where visibility is an act of sharing; an act of bringing people together to build an ethereal, momentary community, much like the Saturday Museum.

Also through our discussion, the more we tried to pin down a static critical framework of operation, the less the project worked, made sense to us, or inspired us.  LOTUSLAND is very much rooted in intuitive action versus thoughtful reflection. The queerness it embraces enables this disregard for introspection. We also confronted the question of what does it mean to ‘professionally develop’ a project that actively pushes away the neoliberal, corporate-obsessed ’Professional’.

So after the first two days guided by discussions with Lucy, and creating an initial video tackling what ‘Professional development’ means to LOTUSLAND,  we decided to re-stage past LOTUSLAND video work within the rural setting.  Giving us a mode of production congruent to LOTUSLAND’s values that enabled reflection and intuitive action. 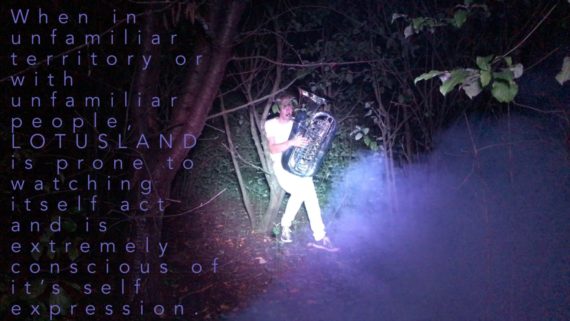 I currently am a studio artist at Wysing Arts Centre, with a BA and MA in Sound Art, as well as a MA in Fine Art. The LOTUSLAND project and collaborative unit, encapsulates my practice. It is a site of enquiry regarding queerness for Paul Kindersley, and myself. Founded in 2015 to explore queer world building and the assimilation of queer culture, LOTUSLAND has been exhibited in Cambridge, Belgium, and London. Along with exhibiting installations, producing performance and video work, we curate live queer events, and invite other artists to screen work, which enables them to explore their own artistic practice within gallery-based LOTUSLAND installations. I am currently building a portfolio with the aim to undergo a practice-based PhD with LOTUSLAND as a basis.