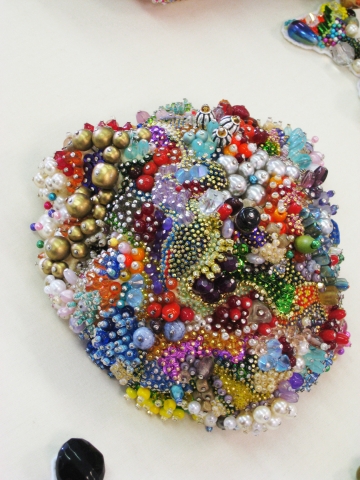 I thought it would be interesting to discuss the work of some of my fellow students. It gives me an opportunity to talk to them in a bit more depth than there is often time to do and also shows the diversity of this course. Cathy Rounthwaite (e-mail : [email protected]) is doing interesting things with bones. Beginning with an engagement with folklore and tradition – a historical perspective on man’s interaction with the landscape, she has been exploring the ways in which so-called ‘traditional’ rituals such as morris dancing or the ‘Hoodening Horse’ (a ritual involving a wooden horse’s head) have been resurrected and reconstructed. These dances, rituals, songs are performed now by moderns for moderns, but, crucially perhaps, without an understanding of their original context and meanings. The rituals no longer have the power, or the place in our lives that they did. We do not now negotiate with nature in the same way – attempting to placate it with our observances and offerings. Cathy has examined these areas in her recent work, observing, organising and filming performances including an enjoyable maypole dance in which several of our year participated. For her degree show she has pursued this interest, turning to working with animal bones. These carry a real force, a kind of talismanic power as well as being beautiful and ambiguous objects. By transforming them both in substance and contextually Cathy is exploring the interplay between the object and its environment. They become something other – what are they ? Bone or cast ? Plastic or plaster ? They are beautiful but grotesque – we recognise the origins of these strange assemblages and are made uneasy by that recognition, by objects divorced from their original context and their very function. This ‘decontextualisation’ is at the heart of what Cathy is addressing. In a sense too she is literally showing us the bones of the rituals – meaning stripped away so all we have left is the structure. But they do retain a gloss both literally and metaphorically – an aesthetic quality which has a power of its own. Inevitably too they carry intimations of mortality – we are ultimately a collection of bones. Do we identify with them ? What do they say about ourselves and our own place in the world ? So I think Cathy’s work is full of interest and raises lots of fascinating questions – its thoroughly intriguing. She is working now on constructing and assembling her pieces; their form and placing will be really important so that’s something she is resolving in the run up to the degree show.

My practical work has been going very slowly over the last few days, I feel. The second book has developed a life of its own and is demanding much more work than I’d expected. Does a piece ever feel finished ? I don’t think so – it all feels like work in progress. What I’m finding now too is that its a process of letting go of some things – letting the book take shape and not forcing too many things into it. I had anticipated including some of the imagery I’d been working with – but it just doesn’t seem to need that. Simply bringing in colour seems to have done what I wanted. I had a useful tutorial which really confirmed what I’d been thinking. I am going to miss having this kind of support. I’m in a small group of four people and have been with them for the whole of this project (and others). We have a couple of hours a week with our tutor and often go for lunch afterwards and continue the discussion. Its a really helpful forum for making me think about what I’m doing – to challenge it. We often find ourselves at similar places – this week I think we all felt a bit tentative. The fact of there being a degree show – an end point – hanging over us I think has the effect of making us feel that we need to stay safe with what we are doing. Which kind of kills the work because you stop experimenting. Or you try to force it into a shape that it doesn’t want to take. I have to embark on the next book now – and I really don’t have much of a feel for it. I need to go back to the words of the character and see what that throws up. I also think – scary as it seems – that I need to take a bit of a break from making and stir up some ideas. I think I’m going to make a flying visit to London – to the Blood on Paper exhibition at the V & A.

We had a group meeting on Friday – a bit of a shock really. I work a lot at home on my own which I really prefer, but it feels a bit like a tidal wave of things thrown at us when I go into college. The good news – or at least surprising news – is that our degree show is being extended. Its apparently now going to run from 13th June right up to the 26th. A good job that the postcards that we organised ages ago still havn’t gone to the printers. My only difficulty with the length of the degree show is that we are supposed to be there 10 – 6 and I can’t leave my dog that long – it’ll require a bit of juggling. Other news is more tutorials and talks – which will be useful as they are focussing on getting our portfolios ready. These sit in our space and accompany the exhibition. Its just that it does feel a bit like more distraction when I’m struggling actually to make the work. I breathed a huge sigh of relief this year when the Dissertation was out of the way (12,000 words on ‘The Artist in Wartime – propaganda, censorship and the visual arts in Britain in the Second World War’) then we had to do presentations to some of the first and second years about our working practice, as well as continually keeping a journal. All of this does sometimes feel like it gets in the way of just working. The date for submitting the journal has also now been brought forward, which for those of us who aren’t that good at doing it regularly is a bit of a nightmare. This journal is something that we’ve done every year of the course – its a record of your work, a place for critical reflection on what you are doing, ‘contextualising’ being the key term. Its a task I find really difficult – I was told in first year that mine was too personal and I think that feedback has just made me clam up ever since. What is art if not personal ? I also find that the fact that we have to separate the journal out doesn’t sit naturally with me. I keep a sketchbook all the time and thats the place where I write, draw, think…… Separating my drawing and my writing isn’t the way I will work when I’m free of the course requirements. Going into college too reminded me how much we are crammed in to the available space – we’re struggling for room; yet apparently we are lucky in that we still each have a dedicated workspace. Its all under threat. Such a shame as having a decent space is just vital especially for most students who are living in shared houses or university accommodation. 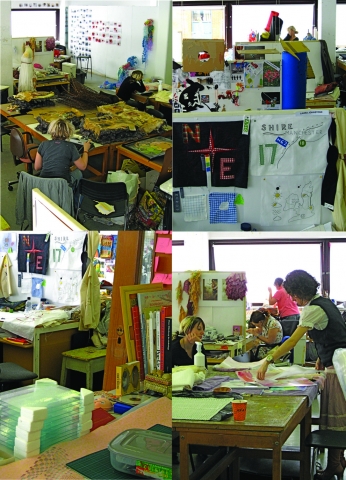 Over the last day or so I have been working on various pages of the next book; in the film, Joan is relentlessly pursuing her goal – she's on a journey up to the Western Isles. She constantly refers to a timetable and everything goes smoothly until the last stage, when a storm blows up. She can't get over to the island – her ultimate destination. At this point in the film everything starts to break down – the timetable is whipped out of her hand by the wind. I'm exploring ways of physically taking apart the narrative, destroying the script. There is order – disorder – then a re-ordering. She goes through a sort of therapeutic process; everything is broken down, stripped away so that she can know herself better. At the end order is re-established but its different. The visual imagery I have in my head is pieces of text flowing out of the book – another key moment in the film takes place by a waterfall. So I'm working on sample pages – using thread and stitch and glue to give this sense of the story breaking apart. Fragments of words. Its beginning to be a bit of a worry that I'm going through all this at what feels like rather a late stage……

I am now in the last stages of the run up to our Degree Show, which opens on Friday 13th June. I hope that isn't a bad omen ! The project I am working on started with a film that I love – Powell & Pressburger's 'I Know Where I'm Going'. What fascinates me about the film is that it addresses ideas of fate – whether our lives have meaning. Do the things that happen to us happen for a reason or are they just random and chaotic ? Do we have any control over our lives or are our choices an illusion ? The film is shot through with references to myth and stories – it is as though the central characters are having to play out the stories that they tell – again this goes back to the question of whether they have any free will. Of course they themselves are only creations in a story too. This interest in narrative led me to make a series of books – or at least to embark on this – each of which will represent one of the characters in the film and contain all the words spoken by that character. Each book is intended to reflect some aspect of the person. I am also bringing in imagery which is personal to me – drawn from the landscape around me. The making process is very slow though – and intensive. The first book that is nearly complete is a circular book – Torquil, the hero figure, represents a force of chaos in the film, the person who disrupts the heroine's plans. Central to the film is a whirlpool and he is the living embodiment of that. 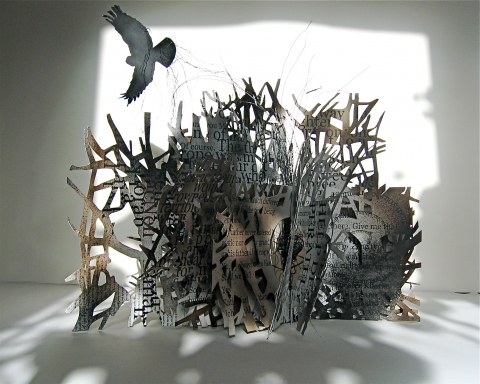