Martha Rosler was a name from my group crit 24/11/20, to explore the male gaze, effects upon women and the “oppressive women’s roles” (MoMa, 2020) of the kitchen further.

Reflection 19/03/21: Rosler’s performance piece within the kitchen inspired me to use the kitchen space for Are You Watching? group exhibition for Congruous which played well to my outcome.

I’m currently interested in performance based work, Semiotics of the Kitchen above is a 6 minute feminist performance film. Rosler first shows herself putting on an apron in the kitchen, very serious with intent for viewers to watch and listen. Rosler parodies the popularised tv cooking show, Julia Child from the 60s and acts as a stance against it as they also glamourise the housewife role, to indulge women to follow that path. She isn’t against the food, but instead where women are shown how to be the ‘perfect’ house wife.

Reflection 26/05/21: Rosler’s piece upon reflection carries a similar approach to the representation of women/how women are portrayed on the cinema/tv screen, like Valie Export addresses. Action Pants: Genital Panic explores the realism of women and their bodies with an aggressive tone with a gun, the same way Rosler uses aggression and the manipulation of kitchen tools in Semiotics of the Kitchen. The same way I use the male mouth in To Bite B&W Repeat as a destructive tool to show the destruction of the female form under male control/consumption.

She takes takes kitchen utensils in alphabetical order, A – Z, to both destroy and challenge this glamorisation of women in the kitchen. With each use of kitchen utensil, she grows quicker/harder to visualise the frustration Rosler has for this expectation of women. By doing this Rosler, a woman, becomes the “sign of the system” (MoMa, 2020) and a language of frustration in the kitchen. However, between the use of each tool, she slows down, and becomes very delicate when picking up the next tool but then becomes violent again.

Reflection 15/04/21: I have carried this violence from Rosler’s Semiotics in the Kitchen into Sweet Tooth B&W as I feel visually, the violence, is most effective in relation to the male form through the female gaze for all viewers to see/understand.

Rosler intended the video to challenge the recognised system of everyday kitchen meanings and “shows that the structures of power, domination, and submission and their ideological ramifications have to be detected and analysed not only within the economic, social, and political realms but also within the system of language and signs itself that constitutes the order of the Symbolic” (Eiblmayr, 1982). “The transformation of the woman herself into a sign in a system of signs” (Weinstock, Rosler, 1981, p 85), as well as reassessing the women’s role in the kitchen?

Reflection 22/01/21: This pushed me to becomes more interactive with my films: including my body/hands within the frame showcasing movement in Baking which wasn’t as successful as I hoped but was a good source of experimentation in relation to Rosler.

The camera observes Rosler movements/punctuating gestures and I wonder if it suggests there’s this relation to the use of the camera being the watching eye, giving access into the kitchen through a female POV. Exploring emotions and gestures of rage/frustration towards the ideals of a perfect housewife isn’t as perfect as Julia Child suggests?? Builds/destroy the breasts within my work, in a kitchen setting could be a response to Rosler’s film and women’s expectations. There is also a lot of contrasted with eye contact with the camera as well as the viewer, making her visual message as direct as she can – something quite sinister about this video. This idea of the sinister act was also mentioned within my film Only Touch With CLEAN Hands.

Reflection 11/04/21: The relation to sinister visual and using the camera as a watching eye is where I am at with Sweet Box, using the camera to be the audiences’ eye since they can’t physically be in the space.

Knife at 3.13 – Rosler looks at the viewer with quite a lot of rage and begins to dagger the knife in the air but then gently places it down onto the table, see above. When showing how the tools work, she gets quicker and then during an action, I noticed she throws her hand away as though she is disregarding/throwing away the domestic role of women that comes with this tool – many impactful movements. Especially with ‘tenderiser’ at 5.21 she says the name so delicately but then contrasts this by slamming it into the table. Towards the end “she is not personifying another utensil but the letter itself: U, V, W, X, Y, Z become written by her body, which in turn means that her body becomes written by them” (Eiblmayr, 1982), as though women are consumed by this role and eventually conform. She finishes her video with a shrug as if she is unapologetic and questioning if society/expectations will change.

Reflection 22/12/20: “Experience of the action” (Weinstock, Rosler, 1981, p 86) she doesn’t use text in her films, so it becomes all about action. This film has similar confrontation that is present in Hot Meat. Or is the film more direct and angrier? 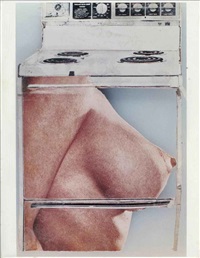 “In the series Body Beautiful, or Beauty Knows No Pain, made between 1965 and 1972, Rosler deconstructs representations of women in mass circulation magazines” (Tate, 2015). Rosler created Cold Meat I, Cold Meat II, Hot Meat and Damp Meat, she visualises “placing the commodified female flesh within the arena of food preparation and consumption” (Tate, 2015).  She uses popular culture images from magazines and playboy to collage the idealised female body onto an oven, suggesting how women are expected to both be the ‘idealised’ as well as filling the domesticated role of the kitchen and as housewife.

I want to use this assertiveness in film and felt motivated by the research with ideas of filming I drew/written up some ideas with moving into the kitchen. I have a lot of thoughts to bring within my work for the domestic setting/environment to see how it impacts the film further.

15/04/21: There’s been this graduation of the kitchen/consumption/violence becoming more obvious within my practice over time.

Reflection 03/03/21: I already had thoughts of being in the kitchen space because of my 1-1 with Newson 26/10/20, and naturally continued this aspect for Congruous. It worked really well in relation to the change of environment, it added to appearance of the sculptures, meaning and the distortion of the projection in the space.