After playing with my projection and a tutorial at uni, I realised that I could project my work on other surfaces than just leaving it as it is. I got inspired by the work of Jane Watt and her WASH […]

In order to have a nice looking video/ a video that I can manipulate with, I had to use of the Adobe programs. I switched between Adobe Premiere Pro and After Effects (AE because I was silly and thought that […]

Projection is supposed to take one of the walls of my little cube exhibtion. As I mentioned before, I want the whole exhibition to be focused on emotions. The projection is going to be projecting me changing emotions. I want […]

The progress of my exhibition proposal has been going well, I have continued the exploration of using the studio at uni further this week by working larger and also by involving actual cellophane more into the space, like the digital […]

After my feedback with Catinca 12/03/21, I projected To Bite first at uni in my studio 17/03/21, but they weren’t as successful due to the bright lighting. I used this as an experimentation, using the walls to create different perspective of the […]

Following the group crit we received with the L5 as well on 19/02/21, they also critiqued our individual films and its context which helped massively as the main focus as been on the practicality of the making the film. See […]

I pieced together the film on the 05/02/21 for my group and our exhibition followed by a group crit on the film. We’re still in need of stills/final films from everyone, but it was good to see these images/pieces of […]

Reflection 04/02/21: I took this imagery and projected it into the bath with water for my Lockdown and Light virtual exhibition submission. As I was photographing into the mirror in my previous series of Up Close and Pink But Up […]

Martha Rosler was a name from my group crit 24/11/20, to explore the male gaze, effects upon women and the “oppressive women’s roles” (MoMa, 2020) of the kitchen further. Reflection 19/03/21: Rosler’s performance piece within the kitchen inspired me to […]

After my formative assessment with Jane, I wanted to continue the exploration of performative art as the feedback was so successful from my group crit 20/11/20. Hannah Wilke did this in her performative work I researched last year L5 which impacted […]

05/10/20 – I had week 1 and 2 of CUBED, a space to practice/work with installing our work. Here is the space I had to work with as well as the poster I designed for my exhibition. It was scary […]

For the past few months I have worked with critical care patients at James Cook University Hospital, Middlesbrough seeking to positively change their experience of these clinical spaces. Bringing changing light, colour, projected imagery and sound, I have enabled patients […]

A light installation has been installed in critical care which creates an ambient light effect. It starts the day with a sunrise and changes throughout the day, ending in the warm light of sunset. This has received very positive responses […]

This week, Dr Paul Chazot and I presented the project at the North of England Critical Care Network’s Annual Conference. We met consultants, doctors, nurses and others on the front line of critical care. Our ideas were very well received […]

Image: Jackie Berridge Reading from my last post of my intermittent blog, I now find myself sitting in front of a log fire rather than the sun of Saskatoon. The rain is torrential and the river is rising. A great day […]

I started to install yesterday and like all first days it was a process of trial and error, dealing with things forgotten, making do with what one has and capitalising on chance …. I had carefully set aside some paper to project […] 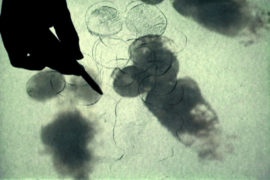 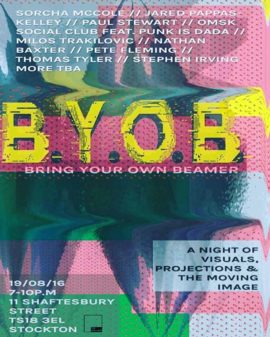 Hosted by Auxiliary (Run by Liam Slevin and Anna Byrne) Bring Your Own Beamer is a one night mad medley of sound and visuals. Situated in a house/semi-converted gallery/living space, featuring a host of local and international artists.