Following the group crit we received with the L5 as well on 19/02/21, they also critiqued our individual films and its context which helped massively as the main focus as been on the practicality of the making the film. See notes below.

One large piece from this feedback was how effective the pink lighting was – a mood of femininity. The lighting/projection gave the representation of women as a whole and the pink feeling of femininity. The imagery projected of many small breasts equated with the sculptures, see below, they felt mirrored in some distorted sense. 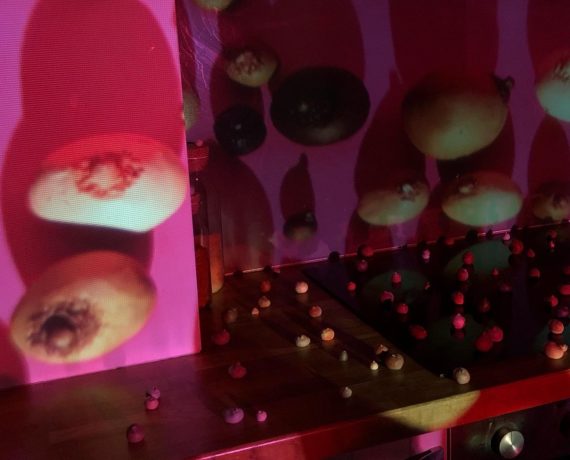 But, a peer said the projection of the breasts make the sculptures seem even more like small objects, the fact the breasts are individual created ideas of women reduced to one hard/cold object, questions is this the only worth they have? – This made me want to explore this path way more for my final project – direct objectification.

Reflection 06/04/21: This is where I have decided to go with Sweet Tooth B&W – eliminate the dancing around it with pretty colours, more direct/cold/it is what it is approach in black and white. It draws attention to the issues at play rather than the ‘pretty feminine’ display.

Another comment was that the breasts didn’t read as breasts to begin with, far away they resembled pieces of dough, small objects that made you squint to see what was coming – this was the aim for the film, I didn’t want to showcase too much in the beginning of the film – I’m glad it was seen the way I wanted it to be to create some suspense as to what they were.

It was questioned ‘is this problematic? The context was taken out of them’ – I don’t think so, I think it added more once you get into the film/ environment, hopefully leaving an after thought in the viewers mind. It would have been problematic if the breasts were unreadable throughout the whole film. Continuing the analysis of the sculptures, one peer said they represented COVID – socially distanced which wasn’t the initial intention but I found this quite funny as it does appear this way. There becomes this playful ‘confrontational/playful with a dark side’ – I like this comment because Rachel Maclean in particular channels this way of addressing issues in Make Me Up, playing with this idea of ‘sickly sweet visuals’ to the point it gets too much/too close to home where you don’t want to watch anymore. There’s this attitude with Are You Watching? that visually addresses these issues e.g. ‘get back in the kitchen’ – Martha Rosler inspiration.

‘The colour scheme was seductive, fansinating and beautiful’, it gave a ‘party/concert/theatre vibe’. It’s great to see that this idea of audience/main stage like a cinema visual is being recognised by fresh eyes – Laura Mulvey and Metz when it comes to the cinematic display of women. Women viewing themselves, viewing themselves. Is it a negative or positive way? While writing my dissertation exploring this theory I have approached it to have a negative impact, yet viewing the work from the POV as a ‘party’ a peer said, it acts as a celebration of all kinds of women/femininity, almost like another world, the colours and the lay out – I love this! Would be worth exploring more in-depth.

Reflection 06/04/21: Interesting contrast to where I am at ow with black and white imagery/film. Almost cancels out this play of colour and seems a lot more serious/intense.

I posted Consuming on the Instagram post for the take over – within this crit, one peer said it changed the way the film was received, more as edibles/treats – seductive? They are also repulsive as they do represent flesh/grotesque that is visible in Cindy Sherman’s Grotesque series and Maisie Cousins’ Finger.

Reflection 23/02/21: It also has Hal Foster’s ideals of abjection but in a new form. This is something I have discussed in my dissertation, that I have realised there is different forms of abjection, even though they’re not labelled. – Sherman has a form of abjection that Maclean does not – bodily fluids etc, but it has the same affect on the viewer e.g. ‘sickle sweet’ too uncomfortable to watch in Maclean’s Make Me Up. This questions if there’s a form of abjection within Are You Watching? that is different to Sherman’s and Maclean’s use of abjection. In my film, I create imagery of real breasts in a preparation space, ready to be eaten, not sweets, clay breasts painted real, which is gross when you think about it and makes you feel uncomfortable. Which is a similar reaction to Martha Rosler Hot Meat with the display of the naked female form on a consumption space.

Was a very useful group crit – infinity room illusions at home, the grotesqueries, abjection & placement of the sculpture. This exhibition has made me realise where my work is most effective – projection/photography and film, again! Suggested artists: