The progress of my exhibition proposal has been going well, I have continued the exploration of using the studio at uni further this week by working larger and also by involving actual cellophane more into the space, like the digital collage I created below, rather than through the imagery.

Reflection 23/04/21: From my 1-1 with Jane, the use of colour in my Riso prints could be reflected in this exhibition proposal. In my print Is use balks text to draw the viewers eye into the work, where as here I could use colour mixed with the black and white film, to draw the audiences attention into the film/space. And possibly text? May become rather like Barbara Kruger’s work – confrontational and forceful. 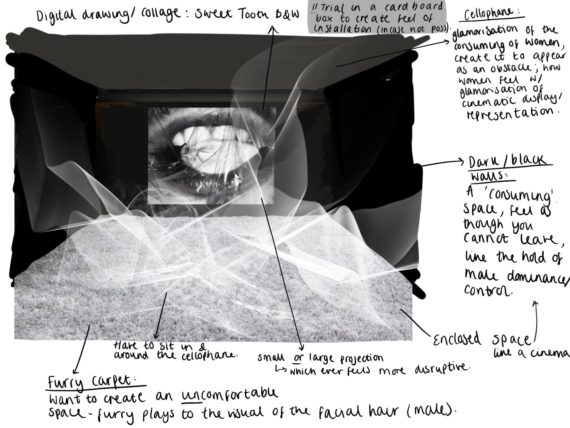 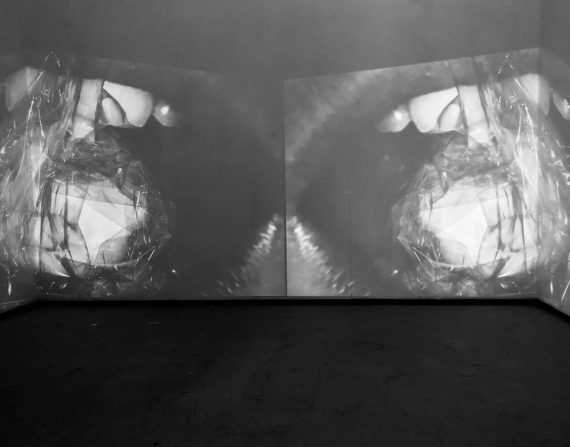 19/04/21 I went into uni to sit and work in the space with daisy chaining the projectors again as it feels most successful – the mirrored image of the breast in the males mouth suggests a pair of breasts or eyes. Relates to the gaze. From my 1-1’s with Matt and Gary I learnt that film may work best in response to documenting this kind of installation so I wanted to explore this. See film below, I wanted to show the scale of the projections if people were allowed to sit and be in the space as part of the documentation process. The projection becomes quite daunting and even more aggressive when you’re so close to it like I was – a lot to take in. There also becomes this relationship to the artist and the artwork again, like Martha Rosler in Semiotics of the Kitchen, even though I am not making/doing anything, it’s the simple act fo the gaze/looking that adds to this film of the projection. Artist and artwork is something I have commented on within my practice.

Reflection 10/05/21: Upon reflection of my formative assessment, Hal Foster says in Obscene, Abject, Traumatic that “Sometimes the screen seems so torn that the object-gaze not only invades the subject-as-picture but overwhelms it.” (Foster, 1996, p113). I feel this appears this way in the film below. Discomfort and the overwhelming feeling of the act as well as the size of the projection, becomes too much for the gaze.

Reflection 26/04/21: From my 1-1 with Jane on the 23/04/21, we discussed how the use of the film above gives a good idea of the space/scale and visual of how people may perceive this work if they could in normal situations. It’s with creating a film where I am continually observing the film, rather than making notes. Gives a better perspective of gazing deeply at a grotesque thing.

Reflection 30/04/21: after my 1-1 with Gary also, we discussed how the film above may be more than a documentation piece, it could be part of the exhibition, there becomes more than watching a film of the installation, it becomes about watching the person watching the work in the space and how they respond.

I decided to record for longer between filming, it gives a better idea of the loop I have chosen to play for this endless exhibition, like Nauman, using a seamless and never ending appearance to his film Poke in the eye/ear/nose. I thought about different placements of the camera/angles of how the film could be perceived. From my group crit 24/03/21, my peers said they like the view up to the film Sweet Tooth B&W. As me and Catinca discussed, the camera becomes the audiences eye and I aim o continue to use the camera in this respects to suggest this feeling of a cinema, where you are lower looking up to watch female representation/sexualisation.

Yet with the film above, it feels intrusive and unapologetic. This is what I want when it comes to the exhibition proposal, I think the studio space works so well with the type of projection – I will need the space to be darker but this can be sorted. There is a good development from my initial drawings etc. Reflection 26/04/21: Regarding my 1-1 with Jane 23/04/21, it was mentioned that the film may worked well if it is projected onto two separate walls – the audience will have to look at both continually to see if they miss anything out e.g. will suggests it’s out of sync.

On the 21/04/21 I brought cellophane into the studio. As my original idea in my digital drawings was to create a space with cellophane draped etc, I felt I needed to try it and as me and Gary mentioned in my 1-1 15/04/21, to not over complicate it, the work doesn’t need it. But I think these also work well in relation to bring the film/experience to the environment, like Are You Watching? and CUBED. I think there is more of a relation to CUBED here as CUBED was more interactive int he sense you could physically go into the space, where as Are You Watching? was very intimate/personal as it was my home, and the camera did the looking/viewing for the audience. There are ideas of pornography and may always will be but it is important to note that pornography acts as the cinema, where it creates a situation/context to normalise it. The use of the large projections, creating a double suggests this warped version of the cinema/representation of women and the visual of sexual objectification you don’t often see at the cinema, but do in pornography, they of course glamorise it too.

Reflection 29/04/21: my 1-1 with Gary today made me consider more about the audience, Gary as a man, saw the work as male violence towards women, my peers see it more as consumption and male control over the women – this is where I also see it. I don’t see violence. I think that word is too strong for the work to be considered ‘violent’, but it slightly aggressive as the male chews. I need to consider the ways both men and women will view this work. Do I want this drastic perspective? Will men and women always see differently depending on society and experiences?

I really enjoy the low angles, giving a glimpse of the cellophane helps picture what it is – they continue the thoughts of the peering gaze/looking at something you shouldn’t which have all been comments made my peers and tutors throughout documenting this work, especially in group crit 24/03/21.

I think it might be interesting to have a movement film, like from Are You Watching? and the last film above for the exhibition proposal. Or does the focus only need to be on the film/placement? It will allow the viewers to see more of the space and the sparkle from the projector onto the cellophane. Creates a more in-depth perception of the cellophane as this glorifying material, covering, but not covering, up the action happening behind. In the image below, I edited it to appear similar to Sweet Box where I installed carpet into the cardboard box to have a visual of a soft but destructive experience. I tried to bring this back into the still and I think it’s something I am going to have to experiment with – actual carpet or digital manipulation? Is it needed? It think the darker floor creates a more cinematic space.

Reflection 26/04/21: After my 1-1 with Jane 23/04/21, it was mentioned that a movement of the space works well in relation to see more of it. As no one can visit, it is good to create videos like this for the audience online can envision as much of the space/exhibition/work as they can. it’s interesting because it’s all through the artists eye, which normally it is the audience control to see what they want to see. 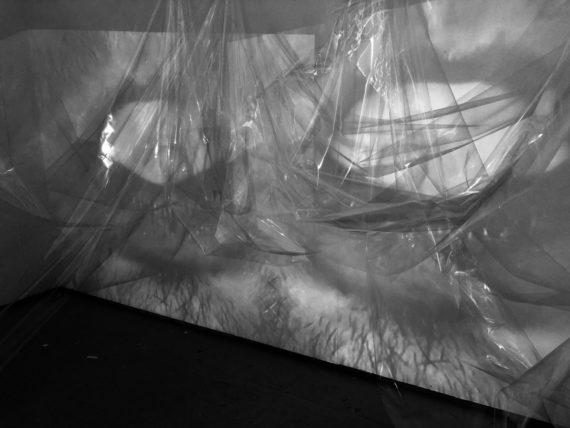 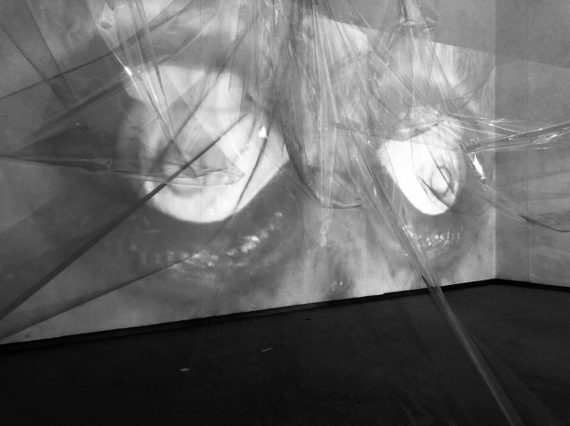